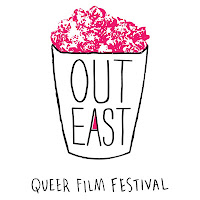 OUTeast Film Festival, June 14-17 2012
Neptune Theatre, Halifax
In its inaugural year, the OUTeast Film Festival, being held at the Neptune Theatre in Halifax from June 14-17,  has the ambitious goal of “challenging, educating and uniting” audiences. To do these things while still entertaining and engaging a wide and varied audience using the medium of queer film is indeed a lofty task.
Festival organizer Andria Wilson explains, “We really want to encourage our audience to be engaged with the work that’s going on in Queer cinema here in Atlantic Canada and around the world.” She emphasizes that the Festival wants audiences to have the opportunity to appreciate Queer film as “outstanding, professional, beautiful work.” The festival wants to prove that queer film is not only for members of the Lesbian, Gay, Bisexual, and Transgender (LGBT) communities – it is for everyone.
When Wilson got together with two other Atlantic Film Festival employees, Jenna Dufton and Krista Davis, over a couple of beers in the fall of 2010, they decided that though Queer film was being given some attention in Atlantic Canada, they wanted to do more. The Atlantic Film Festival’s “That’s So Gay” programming and Peggy’s Festival set a strong foundation but all three knew that Queer cinema had so much more to offer. They wanted to bring it to a Halifax audience.
Wilson states that the OUTeast Film Festival wants to “give audiences more opportunities through the year to come together to see queer films.” Too often gay stories are purely trivialized or stereotyped. The OUTeast Film Festival is an antidote to this.
Wilson is very excited with this year’s festival program, especially the documentaries, Vito and Wish Me Away which will be screened on Friday June 15. The former, Vito, is the story portrayal of the life of gay activist and writer Vito Russo and the latter, Wish Me Away, is country star Chely Wright’s coming out story. On Saturday, June 16 the festival features both shorts and documentary- both favourites of Wilson. The shorts begin at 3:00 PM and at 9:00 the trans documentary, I Am a Woman Now takes centre stage. ~ By Jen Powley
www.outeastfilmfest.com
www.facebook.com/OUTeastFilmFestival