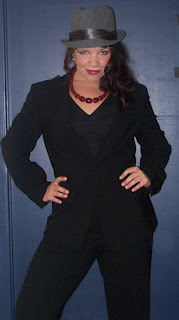 Acclaimed singer/actress Karen Myatt has appeared on stages in Toronto, New York, Mexico, and throughout Canada. The spicy 20-something starlet has trained at the Randolph Academy in Toronto and is a graduate of the American Musical and Dramatic Academy in New York City. She stars in the lead role of Janet Van De Graaff in The Drowsy Chaperone, which runs from June 21-July 8 at The Pond Playhouse in Halifax.
What inspired you to start performing?
For as long as I can remember, my Grandmother has been the main musical influence in my life. From a very young age, I was exposed to the American Songbook that she played by ear on the piano, and we spent many evenings watching the Lawrence Welk Show. I am pretty sure I was the only 10 yr old in the neighborhood rushing home to watch Bobby and Cissy or the Lennon Sisters. This led to my discovery of movie musicals, and thus musical theatre, and I fell in love with the merging of the crafts of acting and singing. That, and the Disney Sing-Along VHS tapes of course, were my inspiration.
Are they the same reasons that you do it today?
My now 93 year-old Grandma continues to be a major influence in my career. And we still watch DVDs of the Judy Garland Show and her favorite, Tony Bennett. But my love for the theatre is what really keeps me going. Those involved in the theatre would agree that this passion is one that is life-long, there is this sense of duty involved. My job is to serve the music, the text, the story. It is not, essentially, about me, only what life I can bring to the work. It's an endlessly exciting commitment and journey.
What are the biggest challenges of the profession?
The biggest challenges of this profession for me usually involve "living up to" industry standards. Commercialization in the theatre makes for a struggle as an actress. The industry's idea of beauty is ever-changing and becoming more and more unattainable. If you are described as "unconventional" or as a character actress, or even a comedienne, the 'image' hurdle can be a daunting one. The other challenge is, of course, rejection. - which is an inevitability, and something that takes time and perseverance to endure.
What are the rewards?
The rewards will always outweigh the challenges. Of course there are obvious rewards like spotlights and applause and acclaim...but the greatest reward is always the process of giving a part of oneself to a piece; giving it life and meaning and hoping that maybe a few people walk away having escaped, become enlightened, or even changed in some way. That, is actually the very goal of The Drowsy Chaperone. And why I love the show so much, because "it does what a musical is supposed to do; it takes you to another world."
How did you get involved with The Drowsy Chaperone?
Director Jacqui Good came to me with a wonderful and unique vision of the Drowsy Chaperone. She described her silver screen of the 1920's vision with such enthusiasm and vibrancy that I jumped at the chance to play Janet Van De Graaff. Jacqui and I have been familiar with each other's work from our days with the Gilbert and Sullivan Society and she has always been such a great supporter of my endeavours, though we haven't had a chance to work together until now! I am also excited to be working with producer Ann Miller and many old (and new!) friends in this hilarious and eclectic cast.
What do you enjoy about the role?
Janet and I have a lot in common. Mainly, that we are divas. Unfortunately the role is...not a stretch. Addicted to the stage, and desperately in love, she finds herself faced with the decision of giving up a successful career or marrying the man of her dreams. I love these kind of blatant struggles in a character. The most interesting aspect of playing one of The Drowsy Chaperone's grand characters (caricatures really) is that we are all actors playing actors playing actors. There is this delicious underlying plot in every scene. We get to explore not only these flamboyant characters and their relationships, but the relationships of the actors who are said to have played them. It makes every scene rich with subtext and endless layers. Fun!
What can audiences expect during the run?
"Mix-Ups, Mayhem, and a Gay Wedding!" Catchy tunes, massive, memorable characters, snappy one liners, snazzy, sparkly costumes (by the lovely Cathleen Neidermeyer), the most charming hostess (Woman in Chair played hysterically by Sherri Bezanson), gimmicks, glitter, and general hilarity. The list goes on...just an all around fabulous night out at the theatre.
What's next for you on the stage?
I am very excited to be appearing at the Chester Playhouse this summer with "Broadway Without Borders." The show was previously named "Immigrant Intent" and written by myself and Stuart Hiseler for our new theatre company Wild Abandon Productions. We performed the show at the Company House last Summer and Fall, and took the show on the road to Montreal and New York City this past February. Our original band is joining us; Fayette Taylor, Stephanie McKeown and our incredible musical director Scott Taylor. Director Mary Lou Martin has re-imagined the work, which will take our cabaret style piece to a fully staged production. The show is full of known and unknown Broadway tunes of every era and genre, and is peppered with true life, epic, ridiculous and moving stories from our experience as actors trying to make it in New York City. Stuart Hiseler is the dream partner, with a stunningly full voice, insane acting chops and a body to die for. This is why I try to include a stripper section in every show we produce...get your tickets!
www.karenmyatt.net