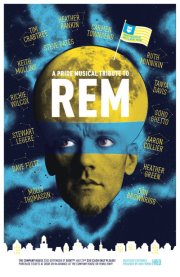 Halifax-based Angels & Heroes Theatre Company (A&H) presents their 6th annual fundraiser, A Pride Tribute Concert: R.E.M., on Monday, July 23, 2012 at The Company House, 2202 Gottingen Street. Show begins at 8pm – $20. Tickets can be purchased at the door, or in advance at The Company House and Venus Envy.
Yes! Angels & Heroes are at it again, bringing many of Halifax’s best musicians to the stage, each with a unique rendition of their favourite R.E.M. song. Hosted by A&H co-founder, Tara Patriquin, this year’s outstanding line-up includes the amazing talents of: Tanya Davis, Heather Rankin (of The Rankin Family), Dave Fultz, Stewart Legere, Carmen Townsend, Soho Ghetto, Richie Wilcox, Molly Thomason, Aaron Collier, Tim Crabtree (Paper Beat Scissors), Ruth Minnikin, Steve Gates, Keith Mullins, Don Brownrigg, and Heather Green.
Each year, A&H chooses the highlighted artist for their contribution to the music industry, providing the guest artists with an interesting platform for their own musical expression. More importantly, the event brings awareness to the pervasive issues surrounding Pride week by choosing a musician who is an influential figure in the queer community, or one who outwardly supports equality and diversity. While the night will echo with the music of R.E.M., it is Michael Stipe who is at the heart of the tribute. He joins the company of past artists: Rufus Wainwright, Elton John, Queen, David Bowie, and Annie Lennox.
So, whether you enjoy the music of R.E.M., the talents of the guest performers, or want to support a Pride Week event, along with supporting a local independent theatre company, this event is sure to satisfy to a sold out crowd, if history repeats itself.
www.facebook.com/events/382194665176489