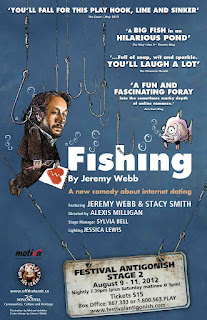 In case you missed it in Halifax this past May, now is your chance to experience Fishing, Jeremy Webb's hilarious and insightful look at the Internet dating domain. The witty production runs from August 9-11 in Antigonish, NS, and then again from August 16-18, and August 21-25 in Sackville, NB.
To write Fishing, did you literally date seven (or more) different women in a seven day period?
Haha! Yes I did…a few years ago now, when the play was first forming in my mind. I had had the basic concept for the show and thought I should give it a go myself. (I was single at the time, so that was ok.) I met some very nice people…and some strange people who probably thought I was strange.  It definitely reinforced my idea that internet dating was ripe for picking for a theatrical treatment. Not all of the things that happened that week are in the play.
What was of the stranger moments from your Internet dating research?
I think a couple of the stranger moments are in the play, but not all! I did chat online to a very nice lady, who turned out to be a pregnant body-builder. Now there’s nothing wrong with either of those things, but put them together and it just seems odd. I had some experiences with some very quirky people that week. I do not want to insult them. That would be mean. The character that I play in Fishing is a bit of a jerk, in the way that he handles it all; in his attitudes towards women. That’s where the comedy comes from – his inability to realise that he’s a bit of a sexist jerk.
What will audience members take away from Fishing?
Well, hopefully, first and foremost they will have a number of laughs! It is a comedy that we are creating. There’s singing, dancing and laughing all in 90 minutes! But there’s actually a deeper story there too. One where my character goes on a bit of a journey of discovery about himself! On a more basic level, some people will get some great tips and lessons on the perils of internet dating. So, I guess Fishing is educational too!
Do you recommend Internet dating?
You bet I do! But it’s definitely something to be very wary of. I always say it’s like smiling and nodding to a stranger across a crowded bar…that’s all internet dating can be and it should be treated with suspicion and respect. The people on the sites have the ability to create versions of themselves. Don’t take anything at face value and be safe, so very safe. Melissa and I met when I went online to log off the dating site after the research. She had just joined it the day before. I thought ‘Wow, she seems great. I wonder whether she’s real.’ Turns out she was. We are expecting our first baby, a son, in a few weeks, just after Fishing opens.
Of your many talents - acting, writing, directing - which is your true passion?
I love all three (except the actual process of writing; that’s really tough.) I have been blessed in my career, getting to do all these things. Halifax has been amazing for allowing me the chances to explore so many different areas of this profession. I get to make a living doing what many dream of.  This year is an amazing one, with so many varied projects to work on. This Summer I get to go back to Antigonish to direct a show (Festival Antigonish Summer Theatre) and then I take another of my plays, Shakespeare On Trial, to Parrsboro’s Ship’s Company Theatre. I have some writing projects (commissions) waiting to get done and then will end the year with A Christmas Carol again. Then there’s the sequel to Fishing…That’s only just come up as an idea this past week!
Have you worked with actor Stacy Smith and director Alexis Milligan before?
I have worked with all my team before. Stacy is hilarious and was actually in my mind when I wrote the play. It’s funny to hear her voice reading the text. Alexis and I acted together last summer in Canning, for Two Planks and A Passion Theatre in Beowulf. She came to me and asked to direct the show… She’s great and has brought so much talent to the table. My tech team are great too. Sylvia Bell and Jessica Lewis have worked on my other shows and are a real integral part of the Off The Leash brand!
Is there anything you’d like to add?
Only to say that Fishing is going to be fun and I hope folks come check it out.
For tickets and information please visit www.offtheleash.ca/fishing