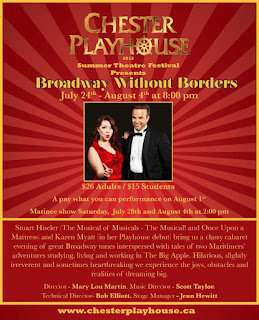 Broadway Without Borders
July 24, 2012
Chester Playhouse, Chester, Nova Scotia
What a difference a little time and space can make.
For performers Karen Myatt and Stuart Hiseler of Nova Scotia-based Wild Abandon Productions, the difference is like night and day.
Last we checked in (March 21), the dynamic duo had done the best they could with what they had at Halifax’s Company House; a small, dimly-lit venue with poor sound.
Fast-forward several months - and into a larger, better-suited milieu - and the talented twosome has realized their potential, kick-starting Chester Playhouse’s 26th season this past Tuesday night with sure shtick, style and swagger.
Drawing on their individual experiences in New York City – and upon the likes of Show Boat, West Side Story, South Pacific and other Broadway musicals – the campy couple engaged and entertained a near-capacity crowd with 2 two hours of cabaret-style music, dance and comedy.
Opening with a medley/mélange of classic and contemporary songs about the Big Apple (Strayhorn, Sondheim, Jay-Z!), the pair shared center-stage, setting mood and tone for the soiree by playing-off one another with quickly-paced, quick-witted verse.
A series of softer solo pieces and droll duets followed, accentuated with amusing anecdotes. Their stirring tribute to Cole Porter - complete with period costumes and dancing - was a highlight, as was Broadway Baby, which showcased Myatt’s vibrant and vivacious vocals. By turn, Hiseler took full advantage of the spacious stage to exhibit his physical prowess during the risqué Naked Maid.
Set two opened with the hilarious Moving Right Along, again followed by a clever combination of individual and coupled collaborations; Myatt’s side-splitting soliloquy to weight-gain I’m Not Pregnant had audience members busting their guts, and Hiseler’s sinister Stalker brought the house down with howls.
Perhaps the evening’s most poignant moments came with quiet, however; both Coney Island, Early Morning (Hiseler) and Stars and Moon (Myatt) were tender and touching, doing well to capture and convey the ache in each of us. The Man That Got Away and We Move On were fitting and fond farewells to the glories of Gotham.
The musical accompaniment of pianist Scott Taylor, bassist Fayette Taylor and percussionist Stephanie McKeown was ideal; ever-present, but never over-stated, the trio knew their place,
allowing Myatt and Hiseler plenty of canvas upon which to paint their performance.
Due credit must go to artistic director Mary Lou Martin for bringing out the best in her players; given the time, space, direction and professional environs, Myatt and Hiseler are ready for the big time, and maybe another shot at their Big Apple dreams. Be sure to catch them here and now while you still can.
Broadway Without Borders until August 4 at the Chester Playhouse
www.chesterplayhouse.ca