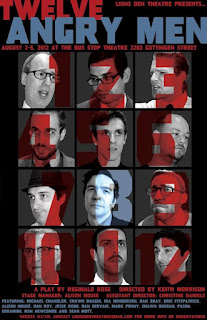 Though still in its infancy, Lions Den Theatre is quickly establishing itself as a creative tour-de-force in and around Halifax. This week, the troupe presents 12 Angry Men at the Bus Stop Theatre on Gottingen St. Director and co-founder Keith Morrison explains.
How long have you been involved with Lions Den, and in what capacity?
Along with Dan Bray and Christine Daniels, I am one of the founders of Lions Den Theatre. We are a few weeks shy of our one year anniversary.
What is the troupe's mandate/mission statement?
Lions' Den Theatre is dedicated to producing contemporary, audience-driven drama that provides our company with unique opportunities for artistic growth.
What are the challenges of the gig?
12 Angry Men presents itself with a unique set of challenges. Firstly, the play is well known as it has been adapted a number of times into well known films featuring some fairly well known actors (Henry Fonda, Lee J Cobb, Norman Fell, Jack Klugman, Jack Lemmon, George C. Scott, Tony Danza etc). It can be difficult to take something that is well known and well loved by people and make even the slightest of changes. Though we are firmly dedicated to presenting the text, there have been some very interesting choices by the actors that might vary from what people who know the story and characters are expecting. We've also chosen to add some technical elements that make the show different from other productions of the play and other productions we have produced thus far.
What are the rewards?
The rewards of being involved in a successful production vary from person to person.  As a producer you strive to create a viable brand and, in our case, we hope people begin to look forward to Lions' Den Productions. We did fairly well with our first two productions and we know of a few people who, though they are not regular theatre goers, have penciled us into their calendars and are eagerly waiting 12 Angry Men. I think the majority of this particular cast and crew get a great amount of enjoyment out of entertaining people and experiencing rehearsal and performance process.
What inspired you to produce Twelve Angry Men?
Twelve Angry Men is a good and thought provoking play that is well known and well liked.  Though the text is very literal, there are a lot of moments for the cast to question the motives of their characters. It is a piece where a lot of the work required is internal for each actor. This play, which features 12 characters that are on stage for the duration, also allows actors to really work on their reacting rather than their acting. We are striving with this production to present the show in a manner that the audience will feel as if they are "flies on the wall." We've focused a lot of our energies on presenting the realism of the situation.
What can audiences expect to experience at the performance?
Audiences should expect a play that is both very entertaining and thought provoking. We have opted to present the production in a manner that is conducive to the script, but (at least to our knowledge) rarely done. For those familiar with the actors who are appearing in the piece, a few of them were cast in roles that are quite different from some of their more recent choices which is a lot of fun for the actors and will add an extra element of entertainment for those who have seen some of their later performances.
What are your thoughts on the state of theatre in Halifax and Atlantic Canada?
Atlantic Canadians are generally very talented and entertaining. I think that there is something for everyone in the Atlantic Canadian theatre, film and music communities. I think all three are growing in popularity and in numbers of people actually participating. These are good signs for the future.
What can we be doing better?
I don't see much lacking in the work of those who are participating in or around the entertainment field. I think from time to time that we need to somehow reach a broader audience. I'm sure that a lot of the independent companies could use a bit more support from those who tend to only go to productions by the more prominent companies or at the more mainstream venues. I don't think that they should stop supporting the "big guys," who do produce great works, but I think they are missing out on some really entertaining experiences by limiting themselves two one or two companies or venues. I don't think this is simply a Halifax based or theatre based issue, but something that affects a lot of independent artists the world over.
What's next on your creative agenda?
I have a few acting gigs coming up in some student films and smaller budget projects and I hope to perform on stage sometime in the next few months. I will be a part of a staged reading for Vile Passeist Theatre in mid-August.  As far as directing and producing, Lions Den has two tentative projects in the works for late 2012 or early 2013. The great thing is that there is so much happening or about to happen that most of us will be as busy as we can handle.
12 Angry Men August 2-5 at Bus Stop Theatre in Halifax
http://www.facebook.com/lionsdentheatre