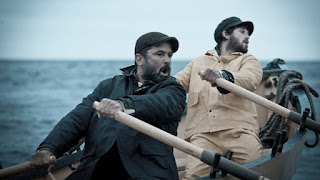 The Oxford Theatre in Halifax was abuzz Friday night with the world premiere screening of The Disappeared, produced by Nova Scotia’s own Two Dories Film Inc. Director/writer, Shandi Mitchell, producers Ralph Holt and Walter Forsyth and the entire cast strolled down the red carpet for the film’s debut.

Mitchell was inspired to pen the script after meeting a 92-year old fisherman who told her he was only afraid once during his career – when he was lost at sea.

The Disappeared was entirely shot off the coast of Lunenburg. Crew spent 12 hours a day filming from a 16 by 24 foot floating platform just a foot and a half off the water’s surface. The results are cinematographic beauty showcasing the sea in many forms, from sparkling splendour to the ephemeral.

If you manage to get your hands on a ticket for the Friday night or Saturday afternoon screenings, you’ll enter the world of six men floating in the middle of the North Atlantic after the sinking of their fishing boat. Their captain Gerald maintains the traditional rules of the ship as he encourages his men to row long hours each day towards home. The film deeply delves into the transitioning psyche of the men, from positive morale to anger, hopelessness and peace of mind. The subtle details, such as salvaging cigarette butts or collecting rain water in cans, add insight into a struggle to survive with
limited supplies.

Mitchell has created six endearing characters, each with their own quirks and traits that viewers will feel bonded to by the end of the film. Actors Billy Campbell (Once and Again, Ghost Town, Melrose Place), Shawn Doyle (Big Love, Endgame, The Robber Bride), Brian Downey (The Adventures of Faustus Bidgood, Whirligig, Hobo with a Shotgun), Gary Levert (Afghan Luke, Charlie Zone, Heart
of Rhyme), Ryan Doucette (Cloudburst, Charlie Zone) and Neil Matheson (Dragonwheel) each play their roles impeccably and certainly do Mitchell’s creativity justice.

If you do not get to see The Disappeared this weekend, be sure to keep tabs on this film for future viewings. ~ Michelle Brunet