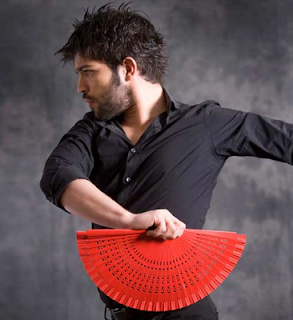 After more than an hour, she stops for but a split second, smiles shyly to spectators, and then starts again; slowly at first, gently weaving her way across the stage, then surely bringing the tempo up to full speed until she is again but a blur of swirling black and red.

One can only wonder what keeps her going.

Thankfully, for fans of flamenco, the fiery force that drives Osende to dance with such fervor is the same one that pushes her to put together the Fall for Flamenco Festival in Halifax each autumn.

The native of Madrid says that she was inspired to start the festival in 2006 by the events that she saw transpiring around her.

“Atlantic Canada has grown so much in recent years,” she explains. “Even in just the very short while that I have been living here, I have seen the positive influence and impact that other cultures have had here. I wanted to be a part of that transition and thought that this kind of event would be the best way to bring the colours and flavors of my homeland to the East Coast.”

While the festival has evolved significantly in scope and size over that half-decade, Osende points out that one thing has stayed the same since the fiesta’s inception.

“We started small and have grown gradually each year, both with the number of events we present and in the capacity of the venues. However, the quality of the events has remained consistently high. Our goal since day one has been to bring the best of the best directly from Spain to Atlantic Canada.”

Those efforts appear to have paid off.

“The response has been absolutely fantastic,” she enthuses. “Our shows keep selling out and people are always asking for more. Thankfully I have many great people working with me every year - my family, friends, our staff and volunteers - because I would never be able to do this on my own.”

She adds that, ultimately, it is the performers that carry the weight of the festival’s success or failure.

“We live and die by our dancers and musicians - they are the heart and soul of who we are and what we do. They are the ones that bring the heat. ”

Osende predicts that things are likely to get even hotter this year.

“Audiences will fall head over heels in lust with flamenco. The flamenco spirit is hard to resist.”

The highlight of the celebrations take place Friday night at the Spatz Theatre in Halifax as internationally acclaimed flamenco dancer David Romero dominates the stage with passion and precision in his Cabndian debut.


While she concedes that audiences in Atlantic Canada might be slightly more conservative than those in Madrid, Montreal or New York, Osende says that the reserve seems to slipping away.

“People are warming up to new ways of seeing the world. Certainly the internet and globalization have opened people’s eyes to new ideas and cultures, but I believe that it is the immediacy and international flavor of these types of events in local communities that are making the biggest difference.”

Despite that difference, she admits that there is still work to be done.

“I feel that, especially in a great city like Halifax, there remains great potential for even more cultural diversity. We have only begun to tap into the rich tapestry of our multiculturalism here.

“It’s rewarding for me to know that I am playing my part in that process. And, at the end of the day, maybe that is what keeps me going.”
Win 2 tickets to see David Romero perform Friday night at the Spatz Theatre in Halifax! To qualify, send us an email at artseastonline@gmail.com with the word Flamenco in the subject line!
www.flamencofestival.ca