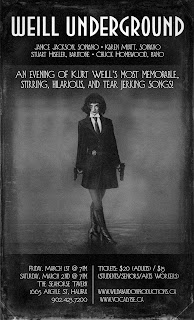 This is the life of men on earth:

Janice Jackson is one of Canada’s foremost interpreters of contemporary vocal repertoire. She has sung over 180 world premieres of new works, many written specifically for her, and performed in modern music festivals and concert halls around the world – Beijing, Paris, Vienna, Amsterdam, Hamburg, Torino, Toronto, Montreal, and more. Jackson has been a frequent guest artist with modern music ensembles in Canada, Europe, and China, and she has made numerous radio recordings with Dutch radio and the Canadian Broadcasting Corporation. Highlights of the 2010 – 2011 Season were 2 world premieres by composer Tim Brady: a melodrama about the life of Marie Curie with Victoria’s Aventa Ensemble and 7 songs based on texts by the Tragically Hip’s Gordon Downie with the Vancouver Symphony Orchestra.

Karen Myatt is a graduate of New York City’s American Musical and Dramatic Academy. She has studied privately with Halifax’s Janice Jackson, and with New York City Opera star Eileen Schauler. In 2008 she was named one of Broadway’s Rising Stars and performed in the Broadway Summer Series under the direction of Tony-Nominated Emily Skinner. She has self-written a cabaret series with the Wunderkind Consortium at New World Stages in New York and Toronto and is a co-founder, director, and performer for the bilingual theatre company; Concordia which tours Mexico with the production Lazos. Other NY credits include Rita La Porta in the Off-Broadway production of Lucky Stiff and special guest appearances at The After Party and in Gail Dennison’s Judy’s House. Halifax credits include; Simone Cixous in Trudeau: Long March / Shining Path (Vocalypse Prod, CBC National Broadcast), Janet Van De Graaff in The Drowsy Chaperone (TAG), Sweeney Todd and Elf the Musical (Neptune Theatre) and Wild Abandon Production’s Broadway Without Borders at the Chester Playhouse.
Stuart Hiseler is a native Haligonian. He is a graduate of the American Musical and Dramatic Academy in New York. He has also studied voice with David Dunbar, Cornelius Reid and Janice Jackson. A professional actor formerly based in New York and Toronto, Stuart has performed in Non-musical and Musical works in Toronto, New York and other theatres in the US and Canada. Locally, selected credits include Neptune Theatre (Peter Pan) Chester Playhouse (The Musical of Musicals, the Musical and Once Upon a Mattress), (Post It’s) Atlantic Fringe Festival, Papageno in the HSOW production of The Magic Flute. As founding member of Wild Abandon Productions, he has co-produced and performed in a series of highly acclaimed, original cabaret productions. Earlier in the year they took the show on the road with a tour to perform in New York and Montreal.
Barbara Pritchard is active in Atlantic Canada as a freelance pianist. She enjoys playing a wide range of repertoire, but specialises in performing music from the late 20th and early 21st centuries. In 2009 the Canadian Music Centre awarded Miss Pritchard the title of “CMC Ambassador,” a designation given to fifty outstanding performers and conductors for their commitment to the performance of Canadian music. Barbara Pritchard is also a co-founder of “Musikon,” a recital series of new Canadian music, based at Saint Mary’s University Art Gallery in Halifax. In 2012 as part of a nation-wide celebration of the centennial of Canadian composer Barbara Pentland, Miss Pritchard was awarded funds towards the recording of a CD of piano solos by Pentland. This CD, Toccata, was recorded in August 2012 and will be released through the CMC’s label, Centrediscs, in November 2012.