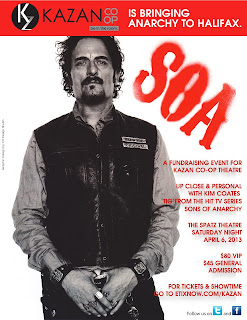 Halifax will get “up close and personal” with actor Kim Coates at a fundraiser for the non-profit theatre company, KAZAN CO-OP, on Saturday, April 6th at the Spatz Theatre in Halifax.


Originally from Saskatoon, Coates has been in over 50 plays and 30 films. He is most recently known for his role as Tig Trager, the most disturbingly violent member of the motorcycle gang featured in the TV series Sons of Anarchy. “It’s so funny because Kim plays such violent guys, but he’s a sweetheart,” says co-founder of KAZAN, Kathryn MacLellan, who will be interviewing Coates in the style of Inside the Actors Studio at the event.


Coates and MacLellan first met playing Action and Graziella in Neptune Theatre’s production of West Side Story (1983) when they were partnered up in dance scenes. MacLellan says that working together was a “blast” and that the physical and vocal warm-ups were particularly hilarious. “I really remember Kim had to sing Gee, Officer Krupke (♪Dear kindly Sergeant Krupke/You gotta understand♪). So every night before the show, we’d run through our dance lifts. Then, when we were done, I’d hear him singing ‘♪DEAR…DEAR… DEAR…DEAR….DEAR♪,’” MacLellan laughs while imitating a focused Coates belting out notes all over his range.
The next year, MacLellan and Coates also starred together in Neptune’s production of Cabaret, and have remained friends ever since. So when MacLellan asked Coates to participate in the benefit event for KAZAN, he enthusiastically agreed.


MacLellan and her sister Janet created KAZAN in 2011 with the goal of “producing live, contemporary theatre”. “Our tag, which is what I feel is so important about the theatre, is Be in the Room,” says MacLellan, who emphasizes that this intimate, face-to-face contact between actors and audience, and the bond that’s created between the creative and design teams, is so vital, especially as the world becomes more tech-driven and virtually connected.


The sisters’ vision for their theatre company encompasses both their passions: aesthetic/technical design (Janet is an established costume designer with numerous theatrical credits to her name) and compelling performances characterized by a “Brando-esque, naturalistic style of trying to get to the emotional core,” describes MacLellan. She herself has worn many successful hats, from studying method acting and group theatre at Strasberg, nationally touring with the Don Messer Jubilee, and competing as both a figure skater and ballroom dancer to her numerous stage, television and film credits as an actor (including Meet the Navy, A Beautiful View, A Stones Throw, The Crucible and The Girl in the Goldfish Bowl) and as a choreographer, director and producer.

KAZAN also brought both plays to Ontario last year. I, Animal was featured at SummerWorks in Toronto, where it was named among the festival’s top 10 plays and actors Antonio Cayonne and Stewart Legere received rave reviews.


Peter Hinton programmed Communion for the National Arts Centre studio season in Ottawa. “Daniel [MacIvor] had performed there, he had passed through there, but he had never been programmed within a NAC season,” says MacLellan. “So we felt very proud of that fact and he was acknowledged by Peter on opening night and we were all a little teary-eyed. We were really happy that Janet and I could bring this work to the NAC, our national theatre, because of how brilliant Daniel is.”


KAZAN will be announcing its plans for a third production at the “Up Close and Personal with Kim Coates” event. John Dunsworth (who was also in that same West Side Story production) will be at the fundraiser probing Coates with the Proust Questionnaire. After the talk show, an after-party will be held on site, featuring a DJ and dancing, drinks, good eats from the Nomad food truck and funny man Bill Carr will be hosting a live auction. ~ Story by Michelle Brunet