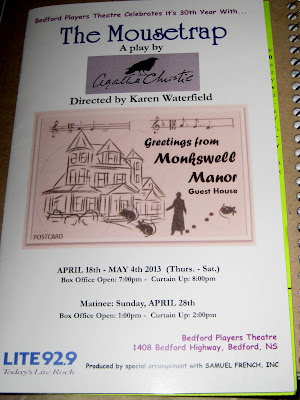 The Bedford troupe officially opened Agatha Christie’s 60-year-old play The Mousetrap last night, but a crowd was treated to a preview show a couple evenings prior.


On Tuesday night, an almost packed house gazed upon an impressively dressed stage flavoured down to the last gold-rimmed mirror and roll-top desk. Before the lights went out, the front of house manager encouraged the audience not to share the plot’s shocking secret outside the theatre. “One key to The Mousetrap’s success is the secrecy asked of the audience at every performance—it is a whodunit—when you leave us today, please don’t reveal the solution,” reads the Bedford Players’ program.

Indeed, if partaking in the play for the first time, spectators are prone to suspect each of the eight characters who grace the Great Hall of Monkswell Manor, not only because of Christie’s superb script, but also, because of the Bedford Players’ interpretation of her work. From the chilling, yet comedic laugh of an unexpected guest to the succinct reveal of a hat and coat, each individual seems plausible as the madman killer prowling for “three blind mice”.

Even if you know the outcome of Christie’s renowned tale, the Bedford Players’ portrayal of the piece is well worth a repeat showing. With slight nerves and tongue ties quickly out of the way, the eight actors triumphed in showing that one does not need to be a paid professional to absorb an audience.

The creative and technical team deserve special mention, for their near flawless incorporation of lights and sounds (chilling piano, radio soundtracks and windy weather) and their attention to detail (including snowflakes on the top of each head coming in from the cold).

In addition to the entertaining comedic-thriller, the Bedford Players facilitated a comfortable community vibe, opening a canteen and a licensed lounge at the back of the house for intermission, where those in attendance could mingle and discuss who they thought was the murderer.

Bedford Players’ presentation of The Mousetrap triumphantly reminds us of the importance—and quality—of community theatre. If their preview performance was any indication, audiences will leave satisfied for the rest of the run. ~AE

The Mousetrap runs Thursdays, Fridays and Saturdays until May 4th (with one matinee on Sunday April 28). For each ticket sold, $1 goes to Kids Help Phone. Tickets are going fast, so book soon! http://www.bedfordplayers.ns.ca/