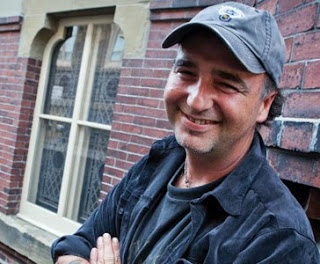 Unlike his beloved Toronto Maple Leafs, Halifax playwright and filmmaker Mike Melski has enjoyed some real success in recent years. His latest theatrical effort, Eighteen, is the story of an elderly Nova Scotia couple who stumble upon the fountain of youth while golfing in Florida. Recently AE spoke with Melski about the production.

When did you come up with the idea behind the story?
It was a happy confluence of a few notions I was having a couple of years ago. I write from experience, and have done plays about hockey, fly-fishing, marathon running, and I never quite found the right idea for probably my favorite pastime, golf. I wanted to explore the magic of the game, the 'zen-ness' of it, but put it in the context of a funny and heartfelt story. I've had several experiences in the strange locale that is Florida, so when Golf collided with Ponce De Leon (legendary quester for the Fountain of Youth in FLA) in my head, I had this thought: "What if you had a mulligan for your whole life?" And I thought, wouldn't that be fun to explore. And it was.

“I wanted to explore the magic of the game, the 'zen-ness' of it, but put it in the context of a funny and heartfelt story.”

When did you start writing it?
Interesting genesis for this one: it all started during a QA after Fly Fisher's Companion. An audience member asked me what I was working on, and I almost never talk about work in progress, but I'd just made this discovery, so I floated it out there and it got a great response. Neptune associate AD Charlie Rhindress was there, along with Neptune marketing director Jennie King, and they cornered me later and said, we want you to write this. I was exhausted after just finishing Charlie Zone and then mounting FFC, so I laughed-- I wasn't sure how serious they were. A month later, they said they were applying for funding for me to become writer in residence, and artistic director George Pothitos approved it. We got the funding and I started writing in October 2011. 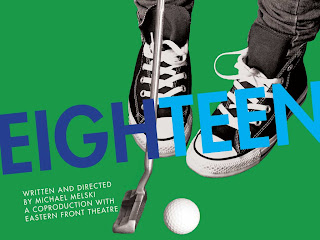 What was the process like, and how long did it take?
It took about a year and half to get to this point, and many many drafts. In the meantime, Charlie became Artistic Director at Eastern Front, all the while providing dramaturgical advice, and then Eastern Front became a co-producer. Neptune's support has been essential and amazing of course. Again, a nice confluence.

What are some of the work's central themes?
EIGHTEEN explores the nature of time, especially our lack of appreciation of it. How we too often squander it on bitterness, unrequited love, missed opportunities, deferred dreams. And it also speaks to the internet age, and how being 18 now is very different than it was in the 60's. The power of choice and ideas around destiny/fate are also key components.

How and when did you know that you were done?
Well, we worked on it for the first couple of days in rehearsal and made tweaks and final cuts to the material, and then we started staging it. You know it's done when you realize there's nothing else you can take away that won't detract from the story.

"It's quite theatrical but also has elements of my film work as well. Lights, projections, sound and music; characters changing into each other, some smaller characters appear in the main characters' journey, which travels around the world, and all done by 4 superb actors doing quick changes."

What have been the challenges in staging it?
It deals with the reality of one elderly couple in Florida and one younger couple in Halifax, but with a pervasive sense of magic. It's quite theatrical but also has elements of my film work as well. Lights, projections, sound and music; characters changing into each other, some smaller characters appear in the main characters' journey, which travels around the world, and all done by 4 superb actors doing quick changes. This isn't a one-set show, an impressionistic approach was the only way we could do it. So there are technical challenges, but I have a great team doing a terrific job to make it happen.

What can audiences expect during the run?
There are some very funny moments and there is sadness as well. The characters get themselves into a state of getting what they want-- their mulligan-- and still not finding happiness. And there are some twists along the way that I won't spoil but as a hint, I would say that for every blessing, there's a curse. Like Fly Fisher's and Hockey Mom, Hockey Dad, it's a blend of comedy and drama. But overall, it is a fun, restorative story and quite a ride through emotions.

What's next on your creative agenda?
First I'm going to take a break! I've been so lucky, but working hard to be lucky. There's a new play in the works with Eastern Front called Kreepy and Little Manson which I'm writing, I'll be directing Hockey Mom, Hockey Dad at Neptune in October, starring Heather Rankin and Kevin Kincaid. I have a comedy series in development at Showcase, and there are a couple of new feature films in the packaging stage. But I owe myself a few rounds of golf this summer, for sure!

Eighteen, until May 12 at the Neptune Studio Theatre in Halifax
www.neptunetheatre.com