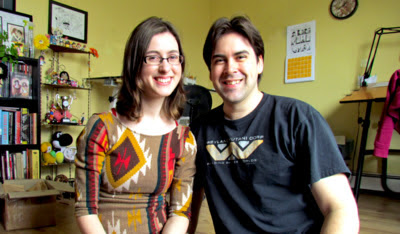 What are the odds of finding two comic artists living in Charlottetown, under the same roof, who are in love? Have no idea! But husband and wife, Troy Little and Brenda Hickey, fit the bill! We decided to have a little fun with the couple, asking each to answer questions about the other. Learn how Troy and Brenda met, how Brenda describes Troy’s creative process, how Troy admires Brenda’s dedicated passion, how each has developed their own distinctive artistic style and how their individual talents have blossomed into thriving professions!


Q: How and when did Brenda start expressing her love for drawing/creating illustrated stories?
TL: Long before I came on the scene! She has dozens of binders filled with comics drawn on lined paper—HUNDREDS of pages long from when she was a kid! If there was ever a person who was put on this planet for the sole purpose of making comics, it’s Brenda.

Q: When you met Brenda (and fell in love) was it through some sort of art connection?
TL: Yep - we worked together at an animation studio for a few years and over time got to know each other pretty well. I was immediately smitten with her. She’s not only beautiful and talented but she’s also the most kind and genuine person I’ve ever met. I’m a very lucky guy!

Q: How would you describe Brenda's artistic style?
TL: Early on it was very anime and manga-inspired owing to her obsession with things like Sailor Moon, Kenshin, Cardcaptor and Fruits Basket. Since then it’s evolved into an expressive, cartoony and playful style uniquely her own. She’s been doing this from such an early age and is still constantly growing as an artist. I can only imagine where that dedication will take her down the road.

“If there was ever a person who was put on this planet for the sole purpose of making comics, it’s Brenda.”

Q: How would you describe Brenda's creative process?
TL: Many of her ideas are still drawn out from those many binders of her childhood but taken on in a more mature and professional way. She also has a real talent for doodling and filling sketchbooks with characters and ideas that have no doubt spawned more then a few comic stories.

Q: What has been one of the major highlights in Brenda's art career so far?
TL: She just hit the big time with IDW Publishing on My Little Pony as the artist for the Applejack micro-series coming out in late July. She is also doing a series of original MLP art sketch cards for the IDW Limited Collected Edition of the comic series. Hopefully this will be a big break exposing her talent to a mainstream audience.

Q: When Brenda is not creating art, how does she spend her time?
TL: Drawing and creating is her essence so it’s very seldom I’ll see her taking much time away from working on something. On occasion she will get wrapped up in a Zelda game, reading graphic novels, making characters out of clay or watching movies and cartoons with me and the kids but the majority of her time is given to drawing.

“She just hit the big time with IDW Publishing on My Little Pony as the artist for the Applejack micro-series coming out in late July.”

Q: What is your favorite work by Brenda?
TL: She’s been working on a graphic novel trilogy, the first of which is called “Tatian in the Halls of the Turnip King”. It’s a goofy fantasy adventure of elves and dwarves spawned from those old comics of hers. It’s been on hiatus for a while due to freelance commitments but I can’t wait for her to return to it so I can read more!


Q: How and when did Troy start expressing his love for drawing/creating illustrated stories?
BH: Like me, drawing was something that Troy always enjoyed doing from an early age.  It wasn't until later in his life that he found that comics were his true calling, though he always enjoyed scribbling out comic ideas to amuse him and his friends since the beginning.

Q: When you met Troy (and fell in love) was it through some sort of art connection?
BH: Yep, we both worked at an animation studio (Trapeze) here in Charlottetown. Comics, our common interest, sparked a lot of those early conversations.

Q: How would you describe Troy's artistic style?
BH: In the early days of Troy's first book, Chiaroscuro, you can see a lot of comic artist Dave Sim's influence over Troy's art style. Makes sense since it was Dave Sim's series Cerebus that made Troy realise his love for the comics medium. Over the years, with Troy's Angora Napkin series, his style became more loose and cartoony - definitely more his own thing. However, Troy likes to challenge himself with changing up his art style for the different titles he works on. I'm sure we'll see a whole new side of Troy's art style in his upcoming projects.

“Troy's tried and true way of coming up with ideas is to brainstorm in the shower.”

Q: How would you describe Troy's creative process?
BH: First off, Troy's tried and true way of coming up with ideas is to brainstorm in the shower. Once the idea is fully formed, he moves on to writing a script, jotting down dialogue and visual ideas. Then comes the drawing stage. Troy roughs are pretty tight and detailed, and he'll take those and trace them onto thick card stock paper to ink.

Q: What has been one of the major highlights in Troy's art career so far?
BH: He's had a quite a few now, but I'll focus on just a couple here. The Eisner Award nomination for his first book Angora Napkin (2009) was a pretty big deal - the award is the equivalent to the Oscars in the comic world. Although, in the end, he didn't win, he was satisfied with just being nominated. Now he's got a second chance at the Eisners as his new Angora Napkin book titled Harvest of Revenge (2012) has now received a nomination as well!

Q: When Troy is not creating art, how does he spend his time?
BH: Watching movies, playing video games... more drawing...

“The Eisner Award nomination for his first book Angora Napkin (2009) was a pretty big deal - the award is the equivalent to the Oscars in the comic world.”

Q: What is your favorite work by Troy?

BH: I enjoy his Angora Napkin series, particularly the new book "Harvest of Revenge". It's fun to see how the Angora girls have evolved visually since the first book and the coloured pages are beautiful. I also love all the nerd references, even if my knowledge of pop culture is a lot more limited than Troy's and some maaay go over my head.