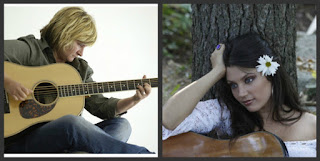 The Company House: It’s a small, cozy place with an artistic atmosphere – music lives there…

My friend and I got there quite early and were surprised that the stage was quite small. But once Christine Campbell and Irish Mythen appeared and started a conversation with the audience, at ease, we realized that the size of the stage did not matter.

Moreover, the small stage created a special feeling of being close to the singers as if they were our old friends. By the end of the evening the audience definitely felt this way after witnessing these two amazing female musicians compliment each other throughout the entire performance.
Christine was full of surprises. Starting with some love ballads, she later sang Led Zeppelin with her voice completely fitting into the legendary “Immigrant Song”. People were exchanging glances and their eyes were saying “Wow, this girl can rock!”

Irish also amazed the audience with her super strong voice and sincere lyrics. She proved that her voice is a perfect instrument itself while singing the famous “Auld Triangle” song a capella, bringing an unforgettable Irish flavor to the event.

Noteworthy, both singers write songs themselves (what a sign of their genuine talent!) and they are both clearly successful as independent musicians. You can feel that their music is not done for money and fame but instead, for self-expression and for the sake of art.

Christine Campbell stunned an enthusiastic Bedford crowd with her mind-boggling guitar and piano technique and her rock to roots vocals (a natural force as if she learned to sing before speaking).

Here’s just a taste of her nearly three-hour set of varied original compositions and covers: