Inside the Anti-Depression Chamber 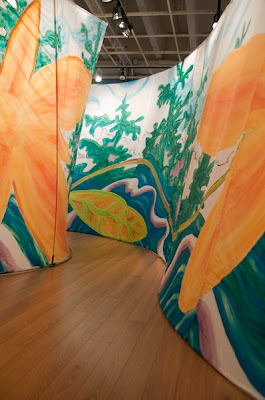 “My art practice investigates shelter, it is the forum from which I investigate and discuss issues of societal importance, and the … Anti-depression Chamber (Happiness Shelter) [is] the vehicle utilized to explore issues surrounding depression,” states Miller’s artist statement. “When discussing the idea of creating a shelter for depression with friends and colleagues their immediate response was one of delight and then relief, the hope expressed was the installation and its accompanying documentation may further the dialogue around depression in the public realm.”

Although depression is the most prevalent of mental illnesses in the western world (and it’s predicted to be the second most disabling condition by the year 2020), there is still stigma associated with the psychological disorder. Miller and Roode’s design seeks to raise awareness while creating a therapeutic and interactive—even a “mood-altering”—experience.

“It’s mostly joy seeing and being in the Anti-depression Chamber, especially when [participants] dance in the interior chamber.” Miller tells AE via e-mail. “The interactive component where one answers the question, ‘What is your antidote to depression?’ is a public forum on depression and those who participate are happy to share their thoughts, and are interested in others' responses.”

Those who enter the chamber (shaped like a curve inspired by natural elements) can read the thoughts and feelings of previous visitors, put on headsets to listen to tunes that spans the last 50 years and interact in other ways, all the while marveling at Roode’s brush strokes.

“I asked Barry if he would work with me on this shelter after I saw some of the drawings he made from Taylor Head Park where we live,” says Miller. “They were fantastic, so I asked him if he wanted to make a 50 foot painting which became the walls of the Anti-depression Chamber.”

Before arriving at ARTsPLACE, the Anti-Depression Chamber had been exhibited at the Craig Gallery in Dartmouth, the Georgian College Campus Gallery in Ontario, and the Tupper Building at Dalhousie’s Medical School. Miller says they may exhibit their installation at a healthcare centre next.

Miller has also been facilitating numerous community and healthcare art programs in both rural and urban locales, including at the Veteran’s Mermorial Hospital in Halifax, the Oyster Pond Academy in Jeddore and the IWK Health Care Centre. “Making things is a way to enter into a state where pain, anxiety and discomfort are replaced by concentration, contentment, fulfillment, meaning, even joy,” she says. ~AE

You can visit the Anti-Depression Chamber at ARTsPLACE until June 16.
http://arcac-artsplace.weebly.com/artsplace-artist-run-centre.html