The Theatre Arts Guild closes its 2012-2013 season at the Pond Playhouse in Halifax with The 25th Annual Putnam County Spelling Bee. Recently AE spoke with the show’s director Jolene Pattison about the production.

How long have you been involved in theatre, and in what capacity?
JP: I did my first play in a proper theatre (with a printed program and everything!) in 1979 or 1980 in Yarmouth as part of a school drama program. I was hooked; since then I have acted, crewed, directed, written, stage managed, choreographed, and produced. Every new job has been a learning experience and I think that is why I enjoy theatre so much. Learning energizes me. There are rumours that my theatrical performances go back much further; however, since this was before the days of 24/7 social media documentation, I can decline to comment on the recollections of my school friends that I was always making them do plays and dance routines.

“…I can decline to comment on the recollections of my school friends that I was always making them do plays and dance routines.”

How did you get involved with this particular production?
JP: TAG was looking for a musical to end the season…and I had been thinking of putting my name forward to direct with them for a while. The artistic director contacted me and we together came up with the idea of the25th Annual Putnam County Spelling Bee. I am so glad to be working with the team at TAG – the behind the scenes volunteers are amazing. They are energetic and committed to supporting community theatre. They offered guidance and support to me and to the production team for this show. As for choosing this particular show, I was introduced to the world of spelling bees through the documentary Spellbound (2002). I don’t really remember spelling bees in my school experience so the idea of the energy and passion these young people and their parents gave to competitive spelling fascinated me. Then I saw the cast of the 25th Annual Putnam County Spelling Bee on the Tony Awards….and I fell in love with the spirit of the show.

What are the challenges in putting this work together?
JP: The show has a bit of a cult status – so our production has to both be respectful of the original yet also uniquely our own. The music is also interesting and challenging. Scott Taylor (musical director) has done a terrific job of bringing the best out of the cast. Scott also plays in the show. This would not have been possible without him. The logistics of a show are always a challenge but I am lucky enough to have Ann Miller producing and Catherine Coutts stage managing. It may be the smoothest show I have ever had the pleasure to work on.

“The show has a bit of a cult status – so our production has to both be respectful of the original yet also uniquely our own.”

What are the rewards?
JP: The cast! They are so talented and generous that every rehearsal has been fun. I have been inspired by their creativity and energy and teamwork. It has been a privilege to work with every one of them. There is also the reward of audience laughter. I can’t wait until we get to perform for people beyond the production team.

What can audiences expect during the run?
JP: The show is fun and the singing is wonderful. The cast brings amazing energy to the story of young people trying to win – and trying to figure out how and why winning is so important to us. And, of course, each night audience members can volunteer to join the cast on stage and try to out-spell them. I think my favorite element of this show is the random element introduced by the guest spellers. By the way, we will only select from audience members who volunteer their names – the rest of the audience can just sit back and enjoy!

“…each night audience members can volunteer to join the cast on stage and try to out-spell them.”

What are your thoughts on the state of theatre in Halifax, and Atlantic Canada?
JP: Theatre in Halifax seems to be growing and diversifying. Small companies like Taboo, TheatreSpeak, and Vile Passéist are producing interesting work – some traditional and some original. New companies seem to be ready to tackle theatre in new ways –a great example is Camarata Xara, which blurs the boundary between choral and theatre. I just know I go to the Bus Stop Theatre a lot these days…and I have never been bored. It may be simplistic to say, but I think a new generation is hungry for theatre that is different, fresh, and honest. It is a creative way to deal with the challenges of a changing audience demographic. One of the things I love seeing is the cross-pollination that can happen when different groups or artists collaborate. It improves the craft and grows the audience.

What's next on your own theatrical agenda?
JP: Well I have done four shows this year –on stage for three (Camelot the Panto at TAG, Roaring Girl with Vile Passéist, Mikado with Gilbert and Sullivan) and one in the director’s chair (Spelling Bee). All have been musicals so it may be time to do a drama. I am looking forward to pondering this question as I relax over the summer. 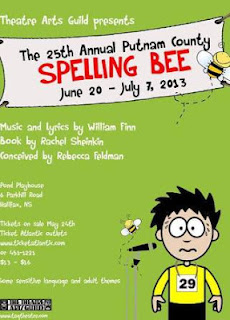