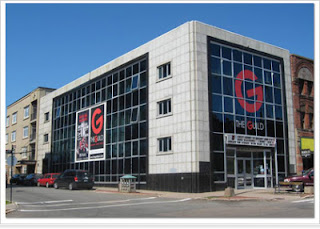 Arts East was so excited to receive this guest post from Justin Shaw, a member of The Guild’s Events Team. In this piece, he highlights what’s taking place at the Charlottetown-based arts centre this summer (including Anne & Gilbert, which kicks off Tuesday the 18th). Shaw also shares some of the intriguing background behind each production/exhibit, and describes just enough detail to entice many an audience member to attend each and every event!

Things are Looking Up: A Look at The Guild's 2013 Summer Season
By Justin Shaw

With their new digital marquee installed, The Guild has never looked better!

As their summer season quickly approaches, this new marquee will be illuminating the variety of summer shows the arts venue has to offer. This summer season, The Guild will be the busiest it has ever been. New to The Guild stage this year is the hit musical Anne & Gilbert, which tells the tale of Prince Edward Island's favourite red-head as she travels to college, begins her first job, and falls in love.

The Guild will also be welcoming back some of their returning shows, Julia Suave will be returning with a new black-light children's theatre production, and the Popalopalots will be returning with more live improv comedy. The Guild not only houses performing arts, as the newly renovated gallery will be featuring two brand-new exhibits in July and August. Based on the range of diversity of this summer’s repertoire, it is clear that The Guild is capable of catering to a wide variety of arts-enthusiasts.

Anne & Gilbert
On January 31st, 2013, The Guild officially announced that Anne & Gilbert would be included in The Guild's summer season. This prompted a series of major alterations to benefit the production. The stage set-up has been repositioned within the theatre, and risers have been installed to accommodate larger audience numbers. While the changes to the theatre space have required a lot work, The Guild staff knows the effort is worthwhile to help enhance the quality of this critically acclaimed production. 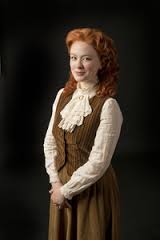 Charlottetown Mayor Clifford Lee even expressed his sincere thanks to “The Guild staff for providing a great venue for the Anne & Gilbert musical.” This musical is an important part of Prince Edward Island tourism, as it features one of Lucy Maude Montgomery's most iconic characters entering adulthood. The success of this production is not limited to the Island, as this show has been celebrated all across North America on over forty different stages. While it may have travelled all over the continent, Anne Shirley will finally be returning home to Prince Edward Island.

“Another one of the many strengths of this production is the experienced talent involved in bringing it to life.”

Another one of the many strengths of this production is the experienced talent involved in bringing it to life. Martha Irving is directing Anne & Gilbert for the third time in her career, and Brittany Banks, who has been involved in all of the seven previous Island productions of this show, has choreographed the musical. Anne & Gilbert will be the most frequently performed show at The Guild this summer, as it will be presented eight times a week, running from June 18th until October 13th.

The Mermaid and The Droplets
While The Guild is pleased to invite new works into the theatre space, returning artists are also being welcomed back this season. For the past few years, The Guild has partnered with Luminosity Black Light Theatre to produce shows utilizing a black-light theatre medium. This summer, Luminosity Artistic Director, Julia Sauve, is pleased to present The Mermaid and The Droplets. This play explores the importance of the water cycle, and reminds audiences how all humans, plants, and creatures impact nature.

According to Sauve, “Luminosity Black Light Theatre is the only one of its kind in the Maritimes.” This show incorporates black-light technology with bright costuming in order to create a stunning visual experience. 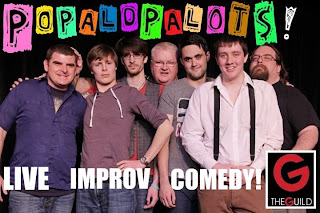 While Anne & Gilbert and Mermaid and the Droplets will provide musical flair to The Guild's summer season, the next returning act marches to the beat of a slightly different drum. Returning for their summer run, the Popalopalots are proud to present their own unique brand of live improv comedy. Comedic ne'er-do-wells Rob MacDonald, Graham Putnam, Cameron MacDonald, Jordan Cameron, Ben Hartley, Dylan Miller, and Justin Shaw are very excited to be returning to The Guild this summer with their eleven show run from July until the end of September. The group does not require any scripts or set-pieces, as the only tools at their disposal are their quick wits, and their willingness to put themselves in compromising positions before a live audience.

“It's like a group of people all agreeing to get into an airplane, fly up to 15,000 feet and jump out at the same time, and together, as we plummet to earth, we attempt to construct for ourselves a giant parachute out of whatever materials we each happen to find in our pockets…”

This summer at The Guild, there is something for all supporters and fans of art and entertainment. For the musical theatre enthusiasts, Anne & Gilbert is sure to warm hearts with its superb blend of story, song, and dance. Youth audiences are bound to enjoy The Mermaid and The Droplets with its mesmerizing lighting effects, and informative subject matter. Deep down, everybody wants to laugh – the Popalopalots' antics and hilarious scene creations will be leaving audience members in stitches. The gallery at The Guild will also provide two different exhibits throughout July and August, both of which were crafted with the intention of challenging the viewer to think and feel. When looking up at The Guild's new digital marquee as the event names flash across the screen, one thing is certain: during the summer 2013 season, The Guild has something for everyone.