Just some of the Halifax Jazz Fest talent in store for tonight include Halifax-based Andru Branch & Haflway Tree, The Nova Scotia-California bred BiCoastal Collective and the Montreal medley Curse in the Woods. You can also catch free shows earlier in the day at the festival tent; and for a more intimate atmosphere, check out Jazz Around Town venues, Jamieson’s, The Press Gang and Rockbottom Brewery.
http://www.jazzeast.com/event-listings/2013-07-12
http://halifaxjazzfestival.ca

In 2007, Nova Scotia-based trumpeter, Paul Tynan, and California-based sax player, Aaron Lington, formed The BiCoastal Collective, which will be performing tonight (The Schooner Showroom at 8pm). Arts East caught up with the pair, via e-mail, last week to find out about how two jazz musicians from either side of the continent connected, about the collective’s successful run of recordings and performances, and even how Lington managed to complete an album while going back and forth from the studio to the hospital when his baby girl was born!

How did you two start collaborating?
PT: Aaron and I have been friends for many years; the BiCoastal project was an outgrowth of Aaron's CD Cape Breton. (I had Aaron up as an Artist in Residence at St. FX and he was taken by the beauty and culture of Cape Breton hence the title.) We had/have such fantastic musical chemistry; we really enjoy playing each other’s music. Cape Breton is a prequel to The BiCoastal Projects in many ways.

How would you describe The Bicoastal Collective's musical style/genre?
PT: In a word, flexible. We have used different sized ensembles for each project. Our first album, BC1, featured a tentet; BC2 a quintet; BC 3 a sextet; BC4, which we are recording in September, will be an organ quartet; and BC5 will be a full big band recording…more details TBA. The Style is how Aaron and I write. Aaron brings a very creative approach to the jazz tradition, while I bring, at times, a bit of the avant-garde mixed with modern approaches. It melds very well, I think.

Your “BiCoastal Family” includes a range of musicians (trumpet, guitar, keyboard, bass, saxophone, percussion…). How do you decide on instrumentals for each recording/collaboration?
PT: We do not try and limit the collective. Rather, we approach each Chapter as a continuation of the story and pick the ensemble and texture/colours needed from/for that.

What has been one of the highlights since you began BiCoastal in 2007?
PT: Witnessing a display of Aaron’s heroic stamina during the recording of BC1. We recorded BC1 over two days in San Jose, CA in May 2007. The morning of the second day, I received a call from Aaron. "Hey Man, what are you doing?" I said I was about to head down to the studio. Aaron then informs me that his wife gave birth to his daughter early that morning (she was a few weeks early) and asked if I could drop my wife off at the hospital to be with his wife until her folks get into town. We delayed the start time of the recording session by one hour, and Aaron came in and performed beautifully, went and picked up is in-laws from the airport after the 8 hour recording session, and then performed a three-hour gig with the BC1 band. All while wearing the hospital bracelet parents get and having one hour’s sleep on the hospital floor. Amazing!

AL: I can add a bit, although the story Paul relates about my wife going into labor in the MIDDLE of the recording session is absolutely true and makes for a GREAT story! I would say that for me, the main highlight has been to see the continued success of this group; to see its longevity and its diversity as each album has progressed.

What will audience members experience at your show tonight?
PT: We'll be playing music that spans chapters 1-3: Swinging, creative, at times aggressive and other times esoteric, and always sensitive. The instrumentation will be like the BC3 Band.

Who are some of your musical heroes/influences?
PT: Jazz-wise: Personally I love the trumpet playing of Tom Harrell, Kenny Wheeler, and Tim Hagans. Compositionally I like the music of Django Bates, Carla Bley, and Dave Douglas, among others.

Which acts do you want to catch at this year's Halifax Jazz Fest?
PT: Dave Douglas!! I hope to hear John Scofield and Lee Kontiz too. There are some really great local musicians playing too that I'd like to hear.
http://bicoastalcollective.com/

Curse in the Woods 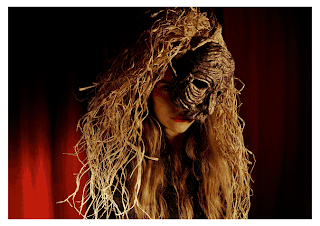 Curse in the Woods is a multi-disciplinary, dark cabaret collective from Montreal who will be playing the late night jazz set tonight at The Company House (11pm). Arts East music reporter Ekaterina Sushko saw these Galaxie Rising Star Contestants perform Wednesday afternoon and shares her impressions.

It was a short daily concert on quite a cloudy day. Despite that, many people forgot about the clouds in the sky and everything else when Curse in the Woods got up on stage.

With her charming smile, Jeannie Taylor shared some of her latest inspirations with the audience making them feel genuinely connected. Then the song started, bringing a theatrical cabaret atmosphere with its melody. At the same time there was definitely something gothic (or mysterious) about the ambience, which was enforced by small accessories, such as a black fan or a black-and-white photo.

During that short concert, the audience had a chance to experience a contagious energy and a powerful presence that Curse in the Woods have on stage. Listening to both their cheerful and mystic songs, especially live, is definitely an unforgettable experience!
~ Ekaterina Sushko 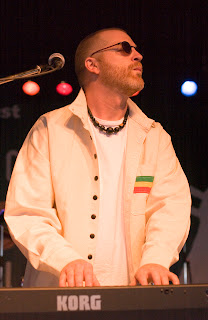 A roots and reggae revelry of epic proportions will resound across the Halifax waterfront tonight, starting at 8pm, as Andru Branch and his band Halfway Tree, along with Halifax’s Verbal Warnin’ and the world-renowned Wailers (formed by some of the original members of Bob Marley’s band), hit the Halifax Jazz Festival Tent.

Branch is an internationally recognized reggae artist with deep connections to the Jamaican music scene, including recording his first album (which was JUNO-nominated) with some of The Wailers; his second with Ziggy Marley’s rhythm section; and his latest, the award-winning Step Into The Light, with Bob Marley’s Studio One bass player, Brian “Bassie” Atkinson. A few days ago, Arts East caught up with Branch to find out about his compelling career and what’s in store for tonight’s show!

How did you first get into reggae and when did you start playing music?
AB: I began playing the recorder in grade four and then went on to study the saxophone in grade five for 13 years.  My Mother bought a piano about the same time that I discovered Bob Marley’s music, and was profoundly inspired by the uplifting nature of reggae music.  I formed my first group in the mid-80s called Oddio, fumbling over a mix of Police and Marley covers, which led to my first reggae group called Souljah.

When did you form Halfway Tree and what have been some of your career’s highlights?
AB: After a long and successful run with a group called Rockstone, I decided to form a full roots reggae band in around 1994 and was inspired to call it Halfway Tree, named after the bustling music district in Kingston, Jamaica. I didn’t know then that I would go on to become intimately familiar, recording and jamming in that part of town. Highlights have included a featured spot at world famous Reggae Sunsplash in 1998, backing some of the top reggae singers and DJs at Sting, 2001, and playing percussion behind the likes of Tony Rebel and Queen Ifrica at Rebel Salute, 2012.

Where are you from and where are some cool places that you've traveled?
AB: I was born in Sackville, New Brunswick, and raised in the multicultural metropolis of Toronto.  My music has carried me to Jamaica a dozen times, and I have enjoyed travelling throughout the Caribbean and West Africa.

What will audience members experience at tonight’s show?
AB: The wonderful Halfway Tree band has been rehearsing a fun-filled set of original music, infused with a musical salute to Bob Marley and the Wailers.

Who are some of your musical heroes/influences?
AB: The great reggae pioneers have shaped my life and my music over many years, including Brian “Bassie” Atkinson and Jackie Mittoo from Studio One; Bob Marley, Peter Tosh and Bunny Wailer aka The Wailing Wailers, as well as Burning Spear, and many more.

Which acts do you want to catch at this year's Halifax Jazz Fest?
AB: I am looking forward to seeing John Scofield and The Wailers, and I very much enjoyed seeing Harvey Miller and Roberto Lopez’s Afro Columbian Jazz Orchestra.