Today at the Halifax Jazz Festival, free concerts kick off at the waterfront tent starting at noon. Tonight at least 10 stages around metro will host an eclectic range of talents, including Peter Van Huffel's GORILLA MASK from Berlin and Zulkamoon from Halifax.
http://halifaxjazzfestival.ca 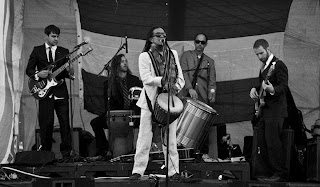 Zulkamoon
In 2008, Inti Gonzalez (originally from Mexico City) moved to Halifax. After two years of collaborating with musicians around the region, he formed a relationship with four artists with varied musical backgrounds. These musicians and Gonzalez shared a common vision and passion, and so, Zulkamoon was born!


What's your first memory associated with playing music?
IG: The spirit of dance which complements music every time...

What inspired you to move to Nova Scotia?
IG: Music, Culture and Traveling.

How would you describe Zulkamoon's musical style?
IG: I’ll describe it as a local blend of Afro-american dance music, with lyrics based on ordinary experiences which I call "the Circus of life".

Who are two of your musical heroes/influences?
IG: Tiken Jah Fakoly and Manu Chao

What can the audience look forward to when they see you perform?
IG: We all look forward to sharing a moment of free dancing with no expectations of any kind…just to enjoy  the joy of ZULKAMOON; sharing music from the streets… 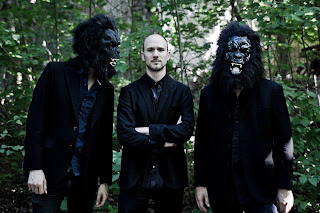 Peter Van Huffel is a Canadian saxophonist based in Berlin, Germany. For the last three weeks, he and his trio GORILLA MASK have been touring across Canada. Tonight’s stop is 1313 Hollis in Halifax for the Jazz Festival. The final stops of their musical voyage will be Antigonish (July 8) and St. John’s (July 10). Arts East caught up with Van Huffel last week when the trio was in Vancouver.


Where are you from originally and what inspired you to move to Germany?
PVH: I am originally from Kingston, Ontario. My move to Berlin is the result of many years of exploring music and desiring to stretch my experiences and find the best place to realize my own personal artistic goals as well as finding a comfortable place to live and work. I've spent many years living in both Toronto and New York before my move overseas; however, I am a dual citizen with Belgium - therefore possessing an EU passport - and had often had the desire to move overseas. Berlin has a tremendous experimental music and arts scene and is booming with creativity. After meeting my wife in 2007 who was living in Brussels, we decided to make the move together to Berlin to start a new life together in a musical inspiring environment.

How or when did you start to embrace a free-jazz style when it came to playing saxophone?
PVH: I have been interested in the more avant-garde styles of jazz ever since I was in my late teens. However, my real interest in exploring it began during my time living in New York City from 2002 to 2008. There I had the opportunity to hear amazing musicians who were writing tremendously interesting music and improvising in a way that I hadn't imagined before. This led me into writing compositions that incorporated free-improvisation with less focus on structural form and chord changes. My move to Berlin however had an even larger impact on this aspect of my playing, as the Berlin music scene is largely based on completely free-form improvisation. Although I still compose actual pieces and improvise off of those, my time in Berlin has really led me into exploring extended technique on the saxophone and to taking the improvisational aspect of my playing much further.

How did you and the other members of Gorilla Mask (Roland Fidezius and Rudi Fischerlehner) start collaborating?
PVH: I actually met Roland Fidezius at the Banff Centre for the Arts in 2004 at a summer workshop that we both participated in. Shortly after this we started to tour together in Europe in different formats and he often visited me in New York where we would also perform together. Rudi Fischerlehner and I met in New York in 2006 through Roland, as Rudi was living there for a short period, although we didn't have many opportunities to perform together before the group was formed. About a year after I moved to Berlin I had the idea to start the band GORILLA MASK and Roland and Rudi just fit what I was looking for. They both have a tremendous history of playing in rock and jazz bands alike, so they provide the strong rock-like rhythm section that I was looking for with a tremendously open mind towards experimenting in improvisation.

How would you characterize Gorilla Mask's style?
PVH: The music performed by my trio mixes influences of free-jazz and rock music –we try to bring a fresh concept to modern jazz that is accessible yet experimental. We are recognized as being a “power-improv” group and our musical style has been referred to as “thrash-jazz” and compared to a range of musical artists from Albert Ayler and Peter Brötzmann to Soundgarden and Henry Rollins.

What kind of success has your trio realized so far?
PVH: We have been together for nearly three and a half years, and in November 2012 we released our first official recording on the German avant-jazz label “Between the Lines”. The album has since received rave reviews across Canada, the US, Europe and Japan, and the band has been performing and touring frequently in some of the top venues around Europe. This summer tour is the band's first appearance in North America, and my first return-tour to Canada in three years.

What has the tour been like?
PVH: Our tour has been great so far. Today we are performing our fifth show in Vancouver, and we have so far played to wonderful audiences in Ottawa and Kingston, Ontario as well as at the Edmonton Jazz Festival last night. We have been treated amazingly everywhere, and it has become really evident that our music really speaks well to the different audiences across Canada. Next week we will be performing in Toronto and Montreal in double-bill with the Toronto band ENGINE before we head out east for the final leg of the tour.

Is there anything you'd like to add?
PVH: Only that we are tremendously excited to have the opportunity to perform so many shows in eastern Canada on this tour, and that we hope people will come to check us out and enjoy experiencing our own individual approach to jazz. I don't think that our musical style is heard every day, and I am looking forward to sharing this in as many places around Canada, Europe and across the world as possible.