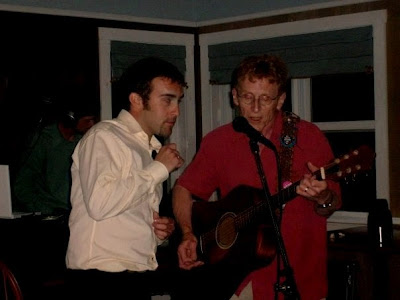 Bruce and Dylan Guthro, The Trews, The Rankin Family, Stan and Garnet Rogers…It’s not uncommon for professional musicians to sprout from the same family tree. But it’s quite intriguing when kin produce completely different genres of music. Charlottetown’s Paul Broadbent and his son Eric seem to fit this paradoxical profile, at least on the surface.

We asked the folk-rock musician/prolific stage actor and the multi-award winning hip hop artist to answer some questions about one another, to realize their passions are much more harmonious than expected.

Q: What's your first memory of your dad playing/singing?
EB: It's so engrained in his identity that I can't remember a time when I didn't think of him as a singer and guitar player.

Q: How has he inspired your own creativity/music?
EB: I ask his opinion on almost everything I work on musically. He taught me how to play guitar and I have used so much of his gear growing up that he showed me the basics on.

Q: How would you describe his musical style?
EB: A guitar based (he is a great player) singer-songwriter… rock and roll fused with folk and blues.

Q: Have you ever collaborated together or would you like to?
EB: He played keys on a song called “Symphony” on one of my first records from a band I was in called Noumenon. He also played harmonica on Living on the Internet, an album by another band I was in called Dead Airwaves. I co-wrote the song “Peace of Mind” on his latest album, The Stratford Sessions. We have been talking about collaborating on an album for years.

Q: Which one of his songs gets stuck in your head the most?
EB: A tie between “Perfect Girl,” “Roll Waves Away” and “Johnny Dean”.

Q: Is there a performance of his that sticks out in your mind the most? Why?
EB: “Culture Shock” [a play by Lorne Elliott]…It is his most revisited role on stage. I think he has played almost every character in the play, performing it on and off for 25 years with Lorne Elliott and Co.

Q: Does your dad have any quirks/superstitions/rituals with regards to playing/composing/performing?
EB: Rituals for sure! He practices playing for like an hour every night, and he keeps the nails on his right hand trimmed to a certain length for finger picking

Q: How does he spend his time when he's not playing/performing?
EB: He is a dog enthusiast (owns two) and is always out walking them, and taking them out on little adventures. The first dog we had when I was a kid is on the cover of one of his albums, Life’s a Beach. He is also a big Toronto Blue Jays fan and a doting grandfather.

Q: If your dad was not a musician, what occupation/passion do you think he should try or embrace?
EB: I think he would make a great dog whisperer. He has a knack with dogs. I'm not even joking! After watching a few episodes of Cesar Millan, my dad has the same effect on them. He has trained several dogs very well. I have only seen a few people with animals trained as well as they were.

Q: What two famous people from history or present day would you like to see your dad share a pint with?
EB: Warren Zevon and John Lennon

Q: Anything you’d like to add about your dad?
EB: I think his music speaks for itself. Check it out:
https://sites.google.com/site/jpaulbroadbentmusic/learn-more

Q: What's your first memory of Eric playing/singing music?
PB: Eric was interested in music from birth. Apart from the usual mimicking that children tend to do, Eric started doing “his own thing” at about age 12.

Q: How has he inspired your own creativity/music?
PB: Strictly from a parental standpoint, Eric has been the subject of several songs.

Q: How would you describe his musical style?
PB: Eric doesn’t limit himself to one style. If I was to pigeonhole him, I’d have to classify him as Hip-Hop-Pop.

Q: Have you ever collaborated together or would you like to?
PB: We’ve collaborated in the past on a few tunes. I expect we’ll do more.

Q: Which one of his songs gets stuck in your head the most?
PB: “Ruined”


Q: Is there a performance of his that sticks out in your mind the most? Why?
PB: His first bar gig, because it was his first. He was underaged. We had to sign a waiver. His performance was electric, a sign of things to come.

Q: Does Eric have any quirks/ rituals with regards to playing/composing/performing?
PB: I am not aware of any specifics. I will say he’s a clean freak.

Q: How does Eric spend his time when he's not playing/performing?
PB: Eric’s a family man through and through. He’s a huge sports fan, especially baseball which he still plays (rec league).

Q: If Eric was not a musician, what occupation/passion do you think he should try or embrace?
PB: Eric has a diploma in business. I would expect him to continue in that field. He would make a great manager/agent. He’s the executive producer on my recording projects. He’s amazing at post production

Q: What two famous people from history or present day would you like to see Eric share a pint with?
PB: Jack Layton and Warren Zevon

Q: Anything you’d like to add about Eric?
PB: He will succeed at whatever he does. His attention to detail and professional attitude make him an asset to anyone who works with him.