The 23rd Atlantic Fringe Festival kicks off tonight in Halifax!

Yesterday we posted an interview with Nancy Kenny, the writer/performer of Roller Derby Saved My Soul, which opens tonight at the Museum of Natural History Theatre. 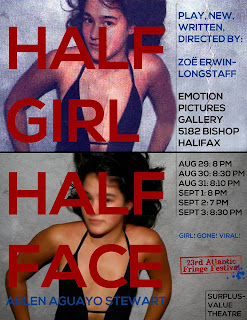 Hailing from Toronto, Half Girl/Half Face (Surplus-Value Theatre) describes the journey of ‘YOUNG-GIRL’ whose face has gone viral. Arts East caught up with the tragic farce’s writer and director, Zoë Erwin-Longstaff.

What was your inspiration for writing the play?
ZEL: Young women b. 1994–96 who lit up my Facebook once they hit a certain age this past year. They began to construct online personas that weren’t only exuberant and brash, but also sentimental, saccharine—and notably, sexualized. It came out in status updates, pix, captions, quotes, cover photos, and wall posts—everywhere. I found this public display a disturbing paradox that corresponded with the weird French theory I was then reading, Tiqqun’s Preliminary Materials for a Theory of the Young-Girl. So I then spent 52+ hours watching these girls’ dedicated YouTube channels, some of them updated like diaries, at once revealing, clunky, disturbing, and oddly empowering.

In a nutshell what is Half Girl/Half Face about?
ZEL: A young girl (“YOUNG-GIRL”) is astounded that a cropped, close-up photo of her face has gone viral. From there it’s a one-woman tragic-farce about a young girl who contends with her sinister fame and its conditions, in her vernacular and tempo. Her YouTube rant spans the meme’s backstory and progress, spontaneous theories of the ‘selfie’, all weaved with the accelerated digressions of the Young-Girl. More generally, it could double as an introduction to young-girlhood in the early 21st century.

What do you envision audience members will take away from the performance?
ZEL: A sense of girl-inflected alienation.

What are you looking forward to at this year's Fringe Fest?
ZEL: Fellow one-woman shows: Alone, Cupidity, and, Help, I am Having a Quarter-Life Crisis.

The Hellish Theatre Collective in Lunenburg NS presents Go To Hell, written and directed by Michael Best (a Robert Merritt Award-winning playwright for Gay White Trash). “It turns out the Christians were right…all gays DO go to Hell,” reads Best’s production’s tag line. The comedy follows Johnson, a homosexual lawyer who finds himself in the depths of Hades; he tries to negotiate a way out, with the Devil himself. As the play’s press release says, “It’s a story of redemption but not about redeeming yourself for being gay.”

Best describes his theatrical background and his inspiration for Go To Hell:

Tell us a little bit about your background in theatre.
MB: Well, I did wanted to switch to the theatre program at the University of Toronto where I studied Russian and East European studies, but my family basically said they'd disown me if I did.  Not that Russian studies was that useful of a degree either.  But I did lots of independent theatre on campus and in festivals there. Then moved back to Halifax and met Jackie Torrens in an acting class. She introduced me to Tara Doyle and we started our comedy ensemble Birdy Num Num and did stage comedy for almost seven years.  They produced my first play, Gay White Trash in 2005 and it was nominated for four Merritt awards—and I won for best new play. We staged it again in 2008—again with much success. It's taken me a long time to get this project off the ground—two years at least—but it seemed right this time and all the stars (including the cast) aligned!

What inspired you to write Go to Hell?
MB: Well, not to sound all writer-y and pretentious but I came up with the idea while I was traveling alone in Greece.  I had just come from Mykonos, which is this hedonistic gay mecca, which was great, but a little overwhelming as well and I think I started to feel a little Catholic guilt from all the misbehaving I did there. But there was no atonement for it—it's just people having a fun time.  But still.....So then I went to another island and was just kind of writing in this unfamiliar place where I didn't know anybody and had no distractions or anything to do except...go out to a gay bar! I was sitting on my balcony, getting ready to go to the one and only teeny gay bar on the island and I just started writing this story. Being a recovering Catholic, I've always had a penchant for skewering religion in many forms and just kind of turning those beliefs on their head—although it would surprise people that I do consider myself a Christian. I was even married in a Baptist church - which I think might have been a Canadian first!  I also had a fascination with those kinds of groups that want to turn gays into straight people and "reform" them so I did quite a bit of research on that too—and of course, turned that whole world on its head!

What do you envision audience members will take away from the performances? (i.e. will it be controversial, hilarious, enlightening...all of the above?)
MB: It might be controversial and enlightening—I hope it gets people talking about lots of different issues.  It's fairly timely with what's happening in Russia and Uganda. But most of all I hope people leave exhausted and crying from laughing so much, saying things like, “I can't believe I laughed at that!  I can't believe they actually did that!" It's a really, really fast-paced show that goes from world to world and takes you on a real ride with a giant twist at the end!

What are you looking forward to at this year's Fringe Fest?
MB: I am most looking forward to seeing other new work by local artists. It's so hard to stage something, and pay people, and rent a space—I think it discourages people from trying something new and writing their own work. But the fringe is such a great venue for that. It’s affordable and professional with kind of a built-in audience so it's a win-win situation for everyone.