When The Ascot Royals take the stage in Halifax tonight and in Sydney tomorrow night, they will be doing what they do best; connecting with concert goers. Recently the band took a break from their extensive touring to connect with AE. 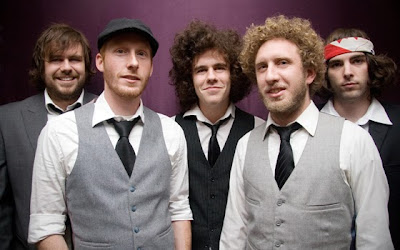 The Band
We are a fairly multicultural band. Brothers Ben and Jimmy Chauveau (keyboards and vocals)are from a small town outside of London, England. Sam Stark (drums) and Scott Page (bass) are from Ontario and guitar player Tal Vaisman moved to Canada 4 years ago from Israel. The band went through a few line up changes throughout its existence before solidifying this current line-up.  Most of us met each other through McMaster University in Hamilton and Metalworks Institute in Mississauga. In early 2013 we released "Don't Let It Stop You,” our debut full length album.

The Album
We spent most of 2012 writing and recording and mixing the album. The writing process was pretty much the most collaborative effort one can imagine or hope to go through when writing as a band. Our different backgrounds and cultural and musical influences were the foundation for our sound. We really had no clear intention other than writing the best songs we could write. So we spent all of our time in the jam space, perfecting and challenging every bit of every song we wrote until they all felt right. The biggest challenge was to gather all of our different ideas and songs into a solid focused collective. We really feel proud of this album because it is so diverse but it sounds like us throughout the entire album. So far we had nothing but good responses. The album definitely introduced many new fans to our music, but it also finally documented these 10 songs which at the time could only be heard live.

The Future
We have a few music videos coming up for a few of the songs, as well as plans for writing a new batch of songs this fall/ winter. We are definitely excited about going back to writing soon, and we have quite a few hooks and songs that we are itching to mould into songs as soon as we can. We are also, as always, planning on more touring and live shows.