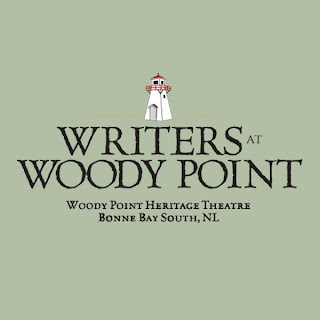 If you have a passion for the arts, a lust for literature, or just simply enjoy beautiful scenic views, ‘Writers at Woody Point’ is where you need to be this month.

Writers at Woody Point is a literary festival held in Woody Point, Bonne Bay, Newfoundland, that has played to sold-out audiences year after year. This year, from August 13th to the 18th, folks will gather from all over the world to share their work, listen to incredible music and make new friends that share the same interests and goals as themselves.

I had the opportunity to speak with Event Coordinator, Gary Noel, to hear his insight and to share a few ‘behind-the-scenes’ details about the festival.

ML: I see that the first ‘Writers at Woody Point’ happened in 2004 – How exactly did it begin?
GN: Stephen Brunt, a well-known Canadian sportswriter, bought a summer place here in 2001. His neighbour, musician Charlie Payne, had recently purchased and lovingly renovated, the old Loyal Orange Lodge and made it available as a theatre, the Woody Point Heritage Theatre, for community events. Steve had the idea of inviting writers here to read in the beautiful, intimate setting of the Theatre, recruiting CBC’s Shelagh Rogers as host, and journalist Alison Gzowski as artistic director, and this is how Writers at Woody Point came to be.

ML: Have you always had the position of Event Coordinator?
GN: I took over from the previous coordinator in 2008. This year will be my 6th festival.


“When you bring a couple of hundred people into a compact little town of 300 for five days of readings and music, you provide many opportunities for audiences, townsfolk, and writers and musicians to get to know each and share the experience of this unique place.”


ML: Have there been any major changes since the festival began? Or, does it operate similarly to previous years?
GN: It started as five events in one venue, and has grown to include nearly 20 scheduled reading events in seven venues, so it is much bigger. But the basic concept – offering literary readings accompanied by great music – is still the basis of what we offer.

ML: On your website, you state that this year’s festival will be the “largest and most ambitious ever”… What big changes can folks attending expect to see?
GN: No big changes, just more opportunities than ever to see their favourite authors and musical acts. And many of the extra events are free, including a series of afternoon pub readings, and a special new outdoor event with the spectacular Tablelands as a backdrop.

ML: In your own words, could you describe the atmosphere of the festival?
GN: Fun, friendly and intimate. When you bring a couple of hundred people into a compact little town of 300 for five days of readings and music, you provide many opportunities for audiences, townsfolk, and writers and musicians to get to know each and share the experience of this unique place. It makes everyone want to come back year after year.

ML: What can writers and artists expect to gain from this festival?
GN: They get very appreciative audiences, a chance to relax and enjoy the beautiful scenery and outdoor activities, and a relaxed atmosphere in which to socialize with other writers, musicians and locals. There have been some interesting collaborations that have come out of the bringing together of authors and musicians. For example, Ron Hynes produced a full album based on inspiration from the authors at our festival.


“Ron Hynes produced a full album based on inspiration from the authors at our festival.”


ML: I see that you have some big musical acts attending. Does the musical aspect of the festival play just as big of a role as the writing/reading aspect?
GN: Although we are first and foremost a literary festival, the musical component has been a big draw since the beginning and will continue to be. Our opening night is just music – the author readings start the next night – and has featured Sarah Harmer, Kathleen Edwards, Alan Doyle, Hey Rosetta! and Joe Plaskett, among others.

ML: What event(s) are you most excited for this year?
GN: This will be the first year of an exciting new collaboration we have with Scotiabank, our major corporate sponsor, and the Giller Prize, which they also sponsor. Each year the latest Giller Prize winner will read at our festival. This year it’s the amazing Will Ferguson, who won the prize for last year’s gripping novel 419.

ML: How would hopeful writers go about getting involved in the festival?
GN: Many authors return year after year as audiences, but those chosen to read are there by invitation only. But our lineup includes not just acclaimed and established writers but also up and coming authors, so if you are on the radar, it’s good that our artistic directors will take notice.


“Each year the latest Giller Prize winner will read at our festival. This year it’s the amazing Will Ferguson, who won the prize for last year’s gripping novel 419.”

ML: What is the biggest lesson you have learned from coordinating this event every year?
GN: Knowing your audience.  As coordinator, I handle all ticket sales and make it a point to get to know as many of our audience members as possible. They like the personal touch and are more inclined to give feedback. In a sense, they see it as their festival – one they will want to come back to -- so they take a strong interest in the planning, both for the current year and for the future.  As much as possible, we want to keep the relationship at that level.


Meghan Lafferty is a creative writer, born and bred in Charlottetown, PEI, who spends her days writing and discussing story ideas with her cat, Sailor Soupie.