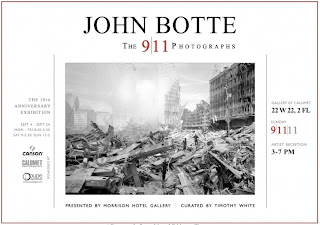 John Botte is a former NYPD detective and lifelong photographer. His unique, powerful and intimate approach to his subject matter can only be described as fine art photo-journalism. Shot entirely in a black-and-white format, Botte’s work depicts a deep respect for his subject matter and an innate desire to communicate the moment in a way that reveals humanity. Of his photographic projects, he is best-known for his body of work capturing the days following the Sept. 11, 2001 terrorist attacks on the World Trade Center in Manhattan.

Now, on the 10th anniversary of 9/11– and five years since the release of Aftermath, his controversial volume of photos that chronicled the days, weeks and months that followed the catastrophic events – many of those stirring images are being exhibited at the Morrison Hotel Gallery in downtown Manhattan.

In this exclusive interview with Arts East, Botte opens up about the exhibit and what it means to his community.

AE: How did you go about selecting the photos for this exhibit?
JB: I didn't. I gave my curator Timothy White the images and let him make the selection. I felt if I removed myself completely and let someone else tell a story with my images, I was curious on how it would turn out. This was something I had never done before, and I must say he did it above and beyond my expectations. 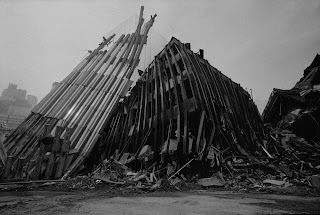 AE: Were there certain themes - visual or otherwise - that emerged during that process?
JB: None in particular. If I shot a frame of film that evoked a certain emotion for me, I just went with it.

AE: Do you feel that this exhibit is part of the collective healing process for both yourself and others?
JB: Perhaps in some ways. People take from it whatever they choose to take. Good or bad. But what this body of work will always be, is an eternal tribute to all who sacrificed.

AE: Will you take the exhibit on the road?
JB: That depends on the sponsors. Exhibits are very expensive and often require several sponsors to absorb the cost that come with doing this sort of thing. But yes, I would love to see the exhibit travel to other areas.

AE: Looking back on your experiences in the days, weeks and months that followed 9/11 - and everything that has happened since then - how has your perspective on life changed?
JB: I reflect often on 9/11 and how it's changed me in so many different ways. I don't have any anger or bitterness eating away at me - I just do my best to continue with my rehabilitation and never forget all those who gave of themselves. 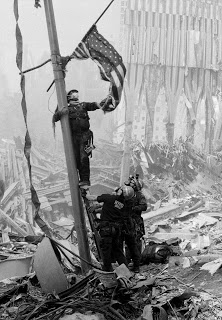 AE: How has photography, in general, contributed to that process?
JB: Reflecting back ten years, I can say with certainty that without photography, I think things would have turned out very differently for me. So I'm very thankful to my art and have realized that for many years, I took it for granted. I don't think that way anymore.