Art in the Open 2013 ~ Charlottetown PEI

On Saturday August 24th, downtown Charlottetown’s historic core was a place of magic. Over 30 visual art exhibits and performance troupes filled the PEI capital’s public squares and parks for the third annual ART IN THE OPEN festival. If you missed it, or wish to relive the cultural fête, vicariously experience it through the eyes, ears and musings of Mo Duffy Cobb. (If you are spatially-inclined, follow Cobb’s journey by visiting http://artintheopenpei.com/english/, scrolling down and clicking on each of the festival’s locations.)

Charlottetown Lights Up with Art in the Open

Artist Jill McCormack, together with her sisters Julie Love, Janice McGuigan and Janeen McGuigan are at it again. Together with their guest contributor and poet in residence, John Mackenzie, they have been working tirelessly on their Art in the Open exhibit. After an all day Saturday setup, the curtains are drawn back and the public is welcomed into their interactive world. I encounter their exhibit, The Creativity Project, while roaming around the Confederation Centre Plaza, a beautiful old historic building, to begin my Art in the Open tour. 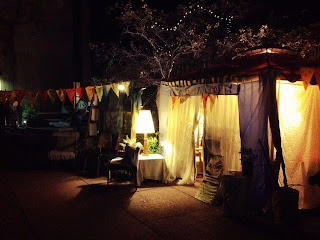 “The theme is impermanence,” says Julie. Their tent boasts the motto,
Enter. Consider. Share. There are old telephones and lamps, things once so important, now dusty and obsolete. Words are arranged on cards and with each new participant, new poetry is created, messages left from one participant to the next. I wander towards the back of the tent, gazing at the phases of the moon. Julie confesses, “Mom always said, ‘This too shall pass’, and we tried to capture that with our exhibit.” 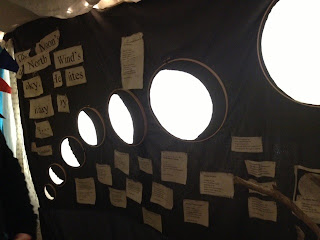 I leave a carefully crafted secret note being prompted to pen something both beautiful and fleeting. Days later Julie would tell me that the messages are both transformative and heart wrenching, and that they would love to pin them on a clothesline for inclusion in a future exhibit.

I duck out of the shrouded tent and into the darkness. By now, people dressed as crows are squawking in the distance, arms bolting out in awkward jabs, their voices lifting the darkness and echoing through Charlottetown’s Victoria Row. This traveling performance is known as the March of the Crows.

I wander around as night falls, moving two blocks west to Rochford Square. The backdrop of Art in the Open is lovely downtown Charlottetown, and part of the appeal is that the usual parks and squares I frequent are transformed with audiovisual, mixed media and interactive exhibits, so it literally becomes a piece of ongoing art. A carefully crafted Disco Ball (built by Ahmon Katz) hangs from a tree. Old bits of mirror, compact discs and even a retired oscillating fan send light in every direction. I continue on towards Victoria Park.

Visitors are entranced, welcomed by Alexis Bulman and Patrick Callbeck’s Rainbow Valley tribute, a dedication to the former amusement park and the fortune telling “Mrs. Sleepy Owl” that touched the lives of many through the eighties. In case anyone’s wondering, I have good things coming to me in 2013. 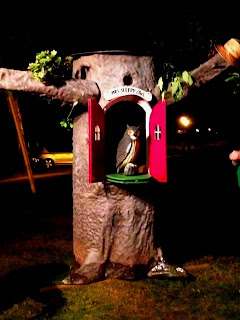 I continue on through Kelly Caseley’s Pop Art, a transformative installation of glowing balloons in Vic Park’s front field. Participants are free to add or remove one of the dozens of tiny lights in the sea of reds and blues. A brilliant orange pylon glows in the distance, and ringing bells tell me that the town criers are near.

I am approaching Sophie Farewell’s However you do it…Consider the Stars, an impressive installation of two elevated stages, set high up in the trees. One backdrop is a mountain, the other a moon, and the costumes of the criers remind me of what Shakespeare’s Globe theatre must have been like. “My father is an apricot!” one crier yells. The audience is encouraged to write messages for the criers to yell and a phone number displayed encourages sending the scripts as texts. 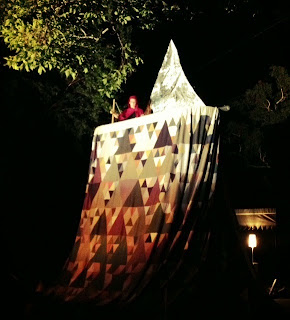 I pass several other performance displays before turning into the woods. Dusk has gone to dark but that doesn’t stop the floods of people heading in the same direction. I am taken first with Nicole Balderston’s Fear Not, You. Me., a forest video installation which begs me to acknowledge the things I fear the most. Maybe this relates to this impermanence that Julie talked about. One of the existential questions of my being remains why I find it difficult to let things come and let them go. I seek comfort in the predictable and fear change.

I ponder this further as bugs glow through broken branches (Jessica Palmer), and arrive at Monica Lacey’s installation, Curiosity: A Love Letter to Abandoned Houses. A front screen door invites you into Lacey’s world, where curtained windows are strung amongst trees, tables set and carpets laid. I am an engaged voyeur and immediately set the scenes for what might have been here: a woman and man in love, a poker game. A grandmother quietly knits in the corner, while a lonesome man smokes. Curiosity is just the beginning in this forest scene; with each visitor, the mind wanders in a different direction. 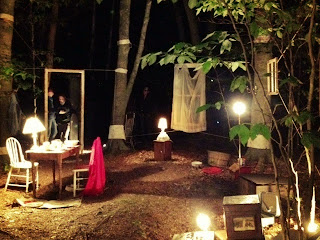 Kudos to the organizers of this festival, Pan Wendt and Becka Viau, for their great work, and to all the artists who submitted projects for Art in the Open. See you next year!