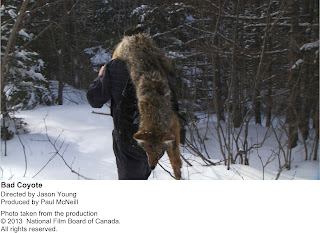 Making its world premiere at the Atlantic Film Festival, Bad Coyote takes an in-depth look at the “coywolf” (half coyote, half wolf) that has migrated to Eastern Canada.

In response to 19-year old Taylor Mitchell being fatally mauled by two coyotes in the Cape Breton Highlands National Park, followed by a number of other coyote attacks/sightings, the Nova Scotia government issued a bounty on the animal.

A researcher, a trapper, a natural resources officer, a sheep farmer, an RCMP officer (who was one of the first on the national park attack scene), and Mitchell’s mother are followed throughout the documentary, each sharing their personal connection to the coywolf. Jason Young is applauded for presenting such a range of perspectives, highlighting the controversial nature of “managing”, or living alongside, animals in the wild. The viewpoint Mitchell’s mother offers may surprise viewers.