The Ride of a Lifetime ~ Atlantic Balloon Fiesta 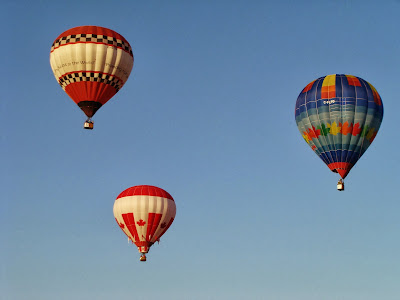 Words and Photos by Almira Robinson

This year I got to attend the 28th Annual Atlantic Hot Air Balloon Fiesta from a different perspective – from the air. It is my favorite outdoor event. For New Brunswickers and others it closes out the summer with helicopter and amusement rides, a car show and craft fair. But the highlight for most is the early morning and evening balloon launches and the spectacular moon glow at night from Princess Louise Park.

Like a 50 year old kid, I was excited. There is nothing like the sound of children young and old enjoying live music from the Atlantic Superstore Bandstand and the smell of popcorn and cotton candy.

This year was special for me because I had not been since 2009. A recent cancer survivor and soon to be celebrating the one year anniversary of my stem cell transplant that saved my life, a friend gave me the gift of a balloon ride. I did not know whether to laugh or cry. I did both.

At the field by 6:15 am, I was surprised to see so many people out with cameras in hand waiting for the balloons to go up. I patiently waited in line to hear if someone did not show so I could take their place. I learned that people sign up the day before to get a balloon ride the next day.

They did last call and a lady came out and announced, “Anyone wanting a paid ride, line up here!” People scrambled and my friend said, “Go!” I was fifth or third in line depending on how you look at it. The first two were couples and the lady behind me was celebrating her birthday. Meeting the people is one of the pleasantries of going to the Balloon Fiesta.

I got called and escorted to Seth, a balloonist with Nova Scotia’s East Coast Balloon Adventures. I hugged one of the balloon chasers and began to cry with excitement and awe.
The view standing on the field as 26 other bright color balloons are blown up was a sight to behold and take in - it increased the anticipation and blood pressure.  We got introduced to the balloon chasers, one of whom was Seth’s wife, Katherine. We were given a waiver to sign that might make you change your mind. There was no door to the balloon, but there were balloons that were handicap accessible. 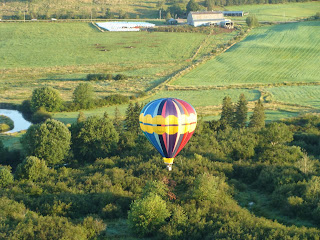 The air was slowly blown in with a fan to inflate the balloon and then heated to make it rise. We were then called to jump in. I had to be pulled in because I am so short – that was a sight to behold! Seth began to explain his credentials and love for flying. He is called from the ground crew to take off. The wonder of it all as you ascend - the people on the ground getting smaller, the balloons around you taking off as you wave and talk to others in balloons, and the rise of the early morning sun was beyond description. There was a camera on board taking pictures every 10 seconds.

We were waving and saying “good morning” to those up early walking their dogs or having their morning coffee from their decks and campers. Seth hollered, “Sorry to wake you,” as we all smiled and laughed at his joy.

There was a moment in flight where all was silent - no movement, suspended in air. I think now I know what it must feel like to be an eagle – the weightlessness, the freedom. When looking down, the problems of the world seemed small compared to the majestic view of Sussex around us as we looked up and around. The beautiful cut lawns and farmlands, the trees, the deer trying to get into someone’s fenced garden and the cows that began to moo as we flew over their domain. I think they thought we were aliens. 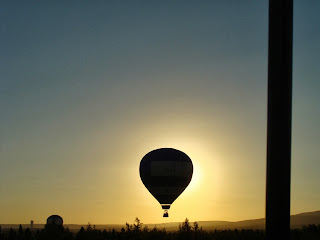 We were at the whim of the wind and of course it was a cow patch that we begin to land in; the cows run toward us. Thank God for the electric fence, for meeting a cow face to face is not on my bucket list. The landing, which I am told can be bumpy, was smooth and better than some airplane flights I have been on. Seth just sat the balloon down.

We could not just hop out because we had to still distribute our weight, so the balloon wouldn’t just take off.  The balloon was deflated with the help of the first person out who pulled a cord hanging from the balloon. Katherine looked for the farmer to get access and permission to his cow patch.

Finally, Seth told the story of the first hydrogen gas balloon flight in 1783. It is called the Champagne Sport for it is two-century old tradition to have a toast with the owner of the property where the balloon lands. Seth said the Balloonists Prayer: “The winds have welcomed you with softness. The sun has blessed you with its warm hands. You’ve flown so high and so well you’ve joined God in laughter and set you gently back into the loving arms of Mother Earth.”

We toasted, hugged and laughed. Sharing this moment with a couple celebrating their one year anniversary and another cancer survivor made my ride of a lifetime that much more special. 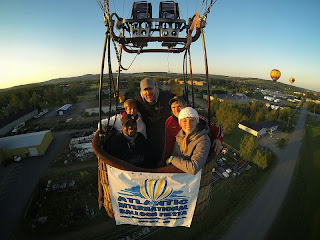 Almira Robinson is an inspirational speaker and writer. She lives in Sussex, NB, where she is enjoying her second chance at life by writing her memoir as she heals from a stem cell transplant.