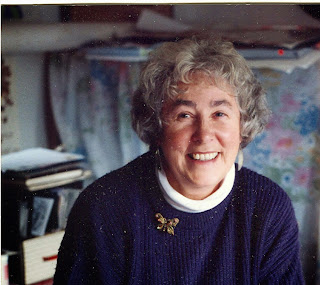 Last night as I was sleeping,
I dreamt—marvelous error!—
that I had a beehive
here inside my heart.
And the golden bees
were making white combs
and sweet honey
from my old failures.

As Arts East chats with Elaine Amyot by telephone, she recites the above excerpt of Antonio Machado’s poem (translated by Robert Bly). She shares how as an artist, she is often influenced by words.

“I did eight works and showed them at the Joie de Vivre Gallery,” says Amyot of the pieces inspired by Machado’s verse. “Only one didn’t sell, and children in that area voted me as an artist to go and be with them because they liked the work. The idea of converting—the word that Robert Bly uses is failures but the Spanish and French word is rancune which is resentments in English—when you convert your resentments into something sweet…isn’t that lovely?”

Two years ago, it was the word enigma.

“My husband reminded me that the British musician, Edgar Elgar, had composed music that was 14 variations on the theme of enigma—a portrait of 'my friends pictured within.' So I thought I’ll do that, not with music, but with visual arts. I did 17 portraits of friends. It was fun at the opening, you can imagine, everyone buzzing around saying, ‘Is that him? Is that me?’”

Amyot, 81 years young, is a prolific artist, writer and retired teacher living in Dieppe, New Brunswick. Since moving to the Moncton area with her first husband and children in 1968, her work has been in more than 40 solo and 100 group exhibitions, around the Maritimes, France and Quebec.

Amyot completed fine art studies at the Université de Moncton and has also apprenticed under such creators as Molly Bobak, Canada’s first female War Artist, and potter Helen Beals. She is also a founding member of two galleries located in the Aberdeen Cultural Centre in Moncton: Galerie Sans Nom and Galerie 12.

Although Amyot’s vocation as an artist sparked once she moved to New Brunswick, her creativity actually stems from early childhood.

Listen to this clip from our interview with Amyot as she recalls her earliest creative experiences, growing up in Joliette, Quebec, as a minority:
https://www.dropbox.com/s/ds8cf51nfje8k7b/Elaine%20Amyot.mp3

When Amyot’s first husband passed away in 1971, her family in Quebec encouraged her to move back home. But she had fallen in love with her new creative and warm community, and decided to stay.

“I liked it so much here and I think the people here are wonderful!” Amyot beams “I was accepted and it felt good. There’s an atmosphere of such acceptance, particularly among the Acadians, and I function mostly in that world because French is my first language. I found that it’s invigorating. They’re full of energy and the art world is doing very well here.”

As a single mother and working full time as a teacher, it was difficult for Amyot to always make time for creating. Spending time in her studio from 10pm to 2am nightly led to several burnouts. Still she enjoyed the time she spent in the classroom. “I enjoyed the children very much,” she says. “I taught French immersion for a number of years and liked it because you have to use theatre, song, dance and definitely art for that.”

When Amyot retired in 1992, she was finally able to spend the hours she craved on creating works of collage, assemblage, oil pastel, gouache resist, spray paint, pochoir and other media.
It was also around this time that she found herself in a crowded café. The only seat available was at a table occupied by a Mr. Edward Lemond who owned a second hand bookstore in Moncton—Attic Owl Books. The two began chatting and clicked immediately, forging a deep friendship and bond which led to their marriage a year later.

“I think my life really started when I met him,” confides Amyot. “Maybe that’s why my art took off from then until now.”

Currently Amyot is working on works inspired by natural artefacts she collected on a road trip from Dieppe to Cincinnati. Along the stretch between Montreal and Toronto she was fascinated by fragmities, tall roadside weeds with golden plumes. “So I collected some,” she explains. “I had four large canvasses and I put them on a coloured background on the canvas and then sprayed black paint so that the fragmities were stencils. The results were these little plumed things on stems, which were quite beautiful. So I think I’ll continue that kind of thing.” Perhaps you will get the chance to see these pieces at Amyot’s next solo exhibit, slated for May 23- June 18, 2014, at Galerie 12.

Since her retirement, Amyot has also spent significant time outside her studio, collaborating with other artists in the community. She and her husband co-hosted author readings at Attic Owl Bookshop until Lemond’s retirement in 2008 and Amyot is still a member of the Breach House Gang (the writing group so named because they meet at a home on Chemin La Brèche). The gang has published two anthologies together.

Amyot also published her first book in 2010, The Seven Gates: A Memoir of a Descent, inspired by the myth of Sumatran goddess Inanna, and Amyot’s own battle with and victory over cancer. “I think most people who have read it have found that it was useful because it means when you go through things that are negative and difficult, you learn a lot and feel stronger,” says Amyot. “I go into my childhood. I have, so I’m told, a very clear memory of my childhood, maybe because it didn’t have a lot of people around it.”

Additionally, Amyot has maintained her love for teaching by leading art workshops on mandalas. “I use the same technique that Carl Jung used so that you open yourself up to the unconscious and allow images to come through which is what all true artists do; some don’t and I call them secondhand artists,” she laughs. “It’s very frightening actually, but if you can do it, there’s so much revealed…It’s like watching something being born in each person—a new element that they hadn’t known was there.”

When asked what has been the highlight of her 81 years so far on Earth, Amyot responds: “The last four years—strange isn’t it? I’m an Aries, and I’m told that we develop late, so there we are…It seems to me that everything is okay. My health is okay, with the help of modern medicine, I have very few difficulties. I had cancer and that was 22 years ago. I’m very fortunate. And I feel that I have so many good friends. I’m in a community that is very supportive and I have a family I love. I’m a grandmother, in fact I’m a great grandmother! And I have a husband who supports me and I support him.” ~AE

Special thanks to Grace Morris for introducing us to Elaine Amyot!