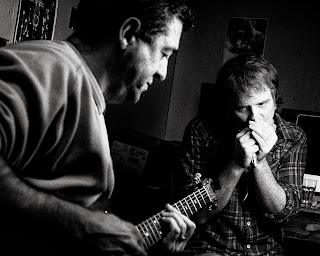 “The songs came first. But songs need to be heard”…That’s the tagline (written by David Partridge) for the Moncton-based band Bruised Orange. The singer-songwriter duo is made up of close friends Steve Long and Roger Cormier. “Each brings their own talents to the mix, and because they are both multi-instrumentalists, the songs feature the whole package, including guitar, bass drums, lead electric, various other string-things, harmonice, etc,” described CBC’s Bob Mersereau (East Coast Music) in a review of their self-titled album, recorded in the Amberwood Studio, and released last year.

Steve Long caught up with Arts East to talk about the band’s past, present and future (including the new addition of Stephane Boudreau) and how music weaves through their lives filled with family, friends, community and creative collaborations.

When did you two start collaborating together?
SL: About seven or eight years ago, Len Leblanc, a bass player I was playing with at the time, and I thought a mandolin would make a great sound for a three-piece. Len knew Roger Cormier through work and that Roger had gotten a mandolin for Christmas that year from his wife, so he invited Roger over one night. It was a funny sight because Roger showed up with this brand new mandolin over his shoulder and some book called "Mandolin Made Easy" or something like that. I think there was a bunch of pictures of chords in it and Roger would follow along with his book at his feet and his mandolin on his lap trying to play as Len and I played some songs we were already familiar with. Don't get me wrong Roger was a great guitar player and singer but the mandolin was brand new to him. After several weeks of jamming we started gigging around some of the pubs. Then next thing you know we're talking about writing our own stuff. Roger had already written a bunch of songs and I had drawers full of them on shabby pieces of paper. Over time we drifted away from the bars and doing cover songs and started to focus primarily on original music.

How did you come up with the name Bruised Orange and ultimately decide to let your own songs be heard?
SL: When we were a three-piece we referred to ourselves as Cormier, Long and LeBlanc. One night a lady told us our name made us sound like a law firm. We realized then it was time for a change. ha ha!

Shortly after that Len left for Alberta. Rog and I were sitting around one night and Rog said, "Why don't we go through some old John Prine records and look for a band name". The first album that came up was one of my favourites by John Prine, “Bruised Orange”.

Where do you get the inspiration for the songs you write?
SL: We both have full lives with jobs and family. There's always something to write about. My favorite songs are the ones we really kick out together. When we are literally passing the pen and paper back and forth or we're intertwining our instrumental parts, kind of letting the song unfold in front of our eyes. We both write differently but when we write like that I believe those have the best outcome. An example would be when we were writing "All These Days," I had come up with this chord progression and an idea about this old man drifting about in deathly pain because he lost his wife of several years. He was driving down country roads, lost and trying to get his life back together. Then Roger said "Woh the bus Steve, that’s way over the top." He came up with another idea. We wrote down all of the easy things that we do every day that we take for granted in our lives, things like brushing our teeth or washing the dishes and how difficult they become when we're feeling such a loss. We kept the theme of loss but got rid of the death story. He was bang on with that one and it's one of my favorite songs that we do. I got an email from a woman who has a copy of the track (she lost her husband several years ago). She wanted to use the song as the theme song for her "widows group" and told me we were right on with the way it feels to lose someone dear to us. That’s when you know you're having an effect.

What instruments do you each play?
SL: When the songs finally make it in to Amberwood we play what ever we have to to get that "we're finished" vibe. There are lots of guitars, mandolin, harmonica, bass and a little bit of keys but for the most part we stay away from keyboards. We both play all of the instruments. Stephane Boudreau has been playing the drums with us for the last few months and although nothing's official (Bruised Orange is a loose operation) it looks like he's a third member. He brings drums, vocals, songs of his own and a love for performing that’s a great asset to the band. The transition has been effortless like he's always been with us

What have been some of the highlights since you formed Bruised Orange?
SL: Last year we opened for a couple of our mentors, Matt Minglewood and Valdy, both out at the Greenwood Lodge (The best venue in New Brunswick) but on separate evenings. When I was a teenager Minglewood's cassettes got as much airtime on my car stereo as Bob Seger, Lynyrd Skynyrd or CCR did. It was awesome hanging out with him just like he was one of the guys. Valdy was great too. He was so friendly and approachable—a hell of a nice guy. He talked it up with my mum and she'll never forget the night.

When we recorded "All These Days" we had Stephane on the drums and Roy Gould was playing the harmonica. Rog was playing the lead guitar through an old homemade amp we picked up from a friend a few years ago. It was hand built by a local guy named Butch Blackmore (famous around these parts for his amp building). That old amp has the best tone I've ever heard and Roy's harp playing is soft yet dynamic. I never new the magic that went down until I opened up the track a few weeks later to start mixing. I was awestruck I couldn't believe how the guitar and harp managed to fall into place. They intertwined perfectly. That was truly a goose bump experience.

How would you describe your musical style(s)?
SL: We just write them and let the song take on its own life. It's what ever the song decides to do I suspect. But after listening back to our music over the last several years I think it's got an Americana sound. Our friends in the south refer to it as Canadiana. I've also heard it referred to as Road House—I like that one.

Tell us about Amberwood Studio?
Amberwood is where it all happens. Deb, my fiancé, gave us a small room in the basement to jam in because the garage got too cold for us in the winter. Over time we've gathered enough audio gear to do some serious recording down there. We've got a drum kit in the corner, guitars and amps scattered about, some great mics, Elvis posters and a good creative all around vibe. It isn't fancy but it gets the job done.

How do you and Roger complement one another?
SL: He always looks better when he's standing next to me ha ha!

How important is music in your life?
SL: Roger and I have a saying "family first". Music would be second.

Anything you'd like to add?
SL: Over the years we've managed to raise some money for various charities. One of our favourite events is our MS Fundraiser. We've been doing it annually for a few years now and have raised close to $15,000. We're both really proud of that one. We've had some great support on this from CBC radio, Storms Billiard and Terry Brian (the real organizer and a good friend). I'm looking forward to doing it again in the spring.

In July 2012 we released our first full length CD and have received some great compliments both on production and song writing.We have enough songs ready now to release a second album, so that’s really exciting and that should be out soon.

Special thanks to Grace Morris for introducing us to Bruised Orange!