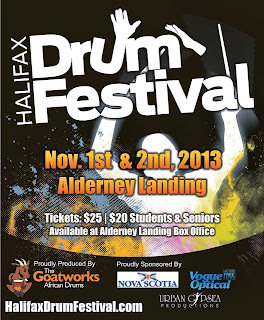 The third annual Halifax International Drum Festival is just a week away and promises a “whirlwind of energy, excitement and excellence that can’t be beat!” Over two days (Friday & Saturday, November 1 & 2) world class percussionists and dancers from here and abroad will be performing mainstage productions and leading workshops representing a myriad of cultures, from First Nations, Classical Indian and Middle Eastern to Celtic, Korean, Spanish Cajon and Afro pop!

When did the Drum Festival begin and what inspired its creation?
CK: In the early part of the new millennium, my friend Matthieu Keijser (an amazing local percussionist) ran what was then called Drum Fest, an annual event showcasing some of the finest percussive based talent in the Maritimes. After his passing, the Drum Fest faded away unfortunately. After a few years I picked up the torch so to speak, put my own twist on the show and it became the Halifax Drum Festival. It was a rebirth, if you will, after a four year hiatus.

What inspired you to get involved with the Drum Festival?
CK: I was inspired to get involved with the Halifax Drum Festival because the demise of the original Drum Fest left a large hole in the local drumming community. Percussion is the heartbeat of everybody, of all cultures; and we needed a venue to showcase the talent we have right here in our own backyards. We need to show people that we are a vibrant, thriving community of musicians, artists and fans. It's a huge treat that we come together once a year, to share ideas and sounds with each other, and highlight our talents with our community.

“Percussion is the heartbeat of everybody, of all cultures; and we needed a venue to showcase the talent we have right here in our own backyards.”

For those who have never attended the festival, what would you like them to know?
CK: If you've never attended the festival, you should know that it is a world class event!! We'll be featuring some of the finest drummers/percussionists in the world. We have performers from Europe this year, as well as from Mexico. Scattered in between these amazing artists will be some of our own amazing, local talent. It is going to be a show that dazzles everyone. Whether you enjoy urban music, to World fusion to classical Middle Eastern drum and dance, there is something for everyone!! This show is fast paced, exciting and fun...Everybody leaves wanting more and they are all smiling!!

Who would you recommend attend?
CK: The show is percussive based, so I'm sure folks will think it is geared solely for drummers. Not so at all! We have designed the show so that it'll be fun and inclusive for everyone. It is music after all, and have you ever met anyone who doesn't like music?

What ethnicities/cultures are represented in the events/workshops/performances?
CK: This year we we’ll be showcasing many diverse cultures and genres of drum and dance! We have NS First Nations, Middle Eastern drum and dance, Classical Indian, African style (Afro pop), World Music/fusion. Mexican Folk, Korean, Drum set, Celtic, Spanish Cajon…all coming together in an exciting mix of sound and style! Whether you’re a fan of traditional or modern, there’s something there for everybody!

“It is music after all, and have you ever met anyone who doesn't like music?”

Anything going on this year that you're particularly excited about?
CK: Everything! But in particular we’re really excited about the growth of our educational component. We would really like to expose young people to the amazing music and talent that is out there, and hopefully inspire some of them to follow a musical path later in life. We’ve slashed ticket prices for a set of matinees created especially for schools and students to make these educational shows more accessible. To date our first matinee performance is sold out and it's going to be such a huge pleasure to have so many young people with their fantastic energy join us at the Halifax Drum Festival!


Anything you'd like to add?
CK: HDF is in its 3rd exciting year and we hope to grow more and more. Eventually I'd like to see the Festival become one of Halifax's premier events, attracting folks from all over to witness the magic that is Halifax Drum Festival, and we’d like to invite you to join us! You can find the whole scoop on our fantastic line-up of performers, performances and workshops on our Facebook page and website: