In 1980, Richard Savoie travelled from his hometown of Moncton to visit a cousin in Halifax. Then and there a particular sequence of notes came to him through inspiration. 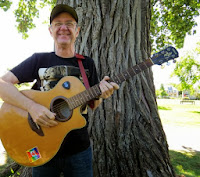 “I actually composed the music on the harbour, on a crisp fall day, walking around with my guitar,” recalls Savoie. “I thought to myself, has there ever been a song called ‘Halifax Harbour?’ It sounded kind of romantic to me.”

A few days later, with the melody and title brewing in his head, he returned to Moncton and met up with John Goobie (John E. Ellis) and Danny Greene, who Savoie has been collaborating with since the mid 70s.

Ellis and Savoie pulled an all-nighter trying to come up with the lyrics for the song. Greene woke up and saw a pile of crumpled papers on the floor and the frustrated looks on his friends’ faces. Savoie remembers Greene saying, “Why don’t you pretend that it’s a boy-girl thing? That way it’ll make it easier to write.” Greene went back to bed, not realizing that his words of wisdom had worked. Savoie and Ellis couldn’t write the lyrics to “Halifax Harbour” fast enough.

“I guess I'm hoping that folks realize that even a New Brunswicker can love Nova Scotia,” says Savoie of the song. “I know I do.”

Take a listen to the gorgeous composition, “Halifax Harbour,” as you continue reading. (This particular recording features Savoie and Jerry Wylie on guitar, his brothers Robert and Gilles on keyboards, his brother Roland on bass, Chris Colepaugh on pedal steel and vocals by Jana Moore and Kristin Pollard.)

Savoie, who just celebrated his 63rd birthday on Monday, has been immersed in music his entire life. Born in Moncton, he spent most of his formative years in Dorchester when his father worked at the Penitentiary. “Music was everything in our family and my parents were the ones who gave me my musical education,” says Savoie, noting that his father and mother both sang and played the piano.

Savoie and his three brothers (Robert, Gilles and Roland) and sister Charmaine were all influenced by their parents’ affinity for music. Their father arranged pieces for them to perform, and the young Savoie children toured, performing live, on television and on the radio.

When Savoie was 14 years old, rock-n-roll took hold and he and some friends started a band called the Mystical Spectrum for which Savoie played drums. “It was the psychedelic era,” describes Savoie, noting they were influenced by Led Zeppelin, Cream, Steppenwolf and Hendrix.

Around that time a friend introduced Savoie to the guitar. After being shown how to play D and F chords, Savoie taught himself the rest, and the guitar became his instrument of choice.

Throughout the 70s and 80s, Savoie played in other bands (like Rocklyn and Hoot n’ Holler), toured extensively and moved around to various locales, from Oshawa to Los Angeles, before permanently settling back in Moncton.

“Denny Doherty was the best!” continues Savoie. “We really had a good talk and he told me lots of jokes…They were getting into a limo and he got in and got out again. He pointed to me and said, ‘I think everybody should pay attention to this guy. He’s good!’ I couldn’t believe it. My jaw dropped!”


Although Savoie has a lot of experience performing, song writing is a resounding passion. “I love the art of song writing,” says Savoie, who has composed hundreds over the years.

This fervour for composition began as an early teen while he was visiting his friend, the warden’s son, in Dorchester. The friend had a pile of records bought in Halifax off the boat from Liverpool, including those of the Dave Clark Five, the Zombies, and the Beatles. The two young boys were listening to the Fab Four even before they were all the rage in North America.

“And then the Beatles came along,” muses Savoie. “That changed everything for me. Through them, I started to understand the dynamics of music—where it could go. It was through them that I was inspired to be a songwriter. When I realized that these guys were actually composing their own stuff, I thought, ‘Hey I want to do that too'."

Another strong influence on Savoie’s song writing was Gene MacLellan. The pair met in the 70s when Savoie was hitchhiking during a blizzard in PEI. “All of a sudden a black car came along,” he recounts. “As soon as I got in, I looked at the driver, and it was Gene MacLellan. I just about crapped myself!”

Before getting out of the car, he was handed a piece of paper. “It looked like it had been folded forever…it looked like some form of origami or something,” laughs Savoie. “Finally I got it pulled out and it was a $10 bill. Why he did that, I don’t know!”

Savoie’s father told him he had better pay MacLellan back. So the next time the celebrated songwriter was playing a gig in town, Savoie headed down to the venue and asked the person at the door to give MacLellan the $10 bill.

A few years later, Savoie ran into MacLellan in Toronto. Savoie got up the nerve to ask if he remembered picking up a hitchhiker during a blizzard in PEI and if he got the ten dollars. MacLellan remembered right away. “From then on we were friends,” says Savoie. “We used to exchange songs. He’d play something he just wrote, and I’d play something I just wrote. He was a good guy…I miss him.”

Savoie still cherishes collaborating with other artists when it comes to both performing and composing. He continues to write songs with Ellis and Greene. Voni Mann, the Boyer Band and Roy Gould have also been key musical partners.

About five years ago, Savoie and his musical collaborators from across the years, including all of his siblings, finished recording an album called Mother Feedback. “Mother Feedback essentially became a family of musicians and writers,” reads the project’s website. “The core of the rhythm tracks were done by the Savoie brothers and the main writer was Richard with many collaborators.” The songs on the album cross over many genres—rock, jazz, blues, country, folk, psychedelia, dance—showcasing the breadth of Savoie’s compositions from over the last five decades.

One of the songs on Mother Feedback is “Sweet Taste of Rose,” composed by Ellis, Greene, Mann and Savoie, and performed by Gould and all four Savoie brothers. Take a listen:

And still the music continues in Savoie’s hands, vocal chords, head and heart.

Richard, we look forward to seeing you perform and hearing more of your songs for many more years to come! ~AE


Special thanks to Grace Morris for introducing us to Richard Savoie!