ACT's production of DOUBT, A Parable 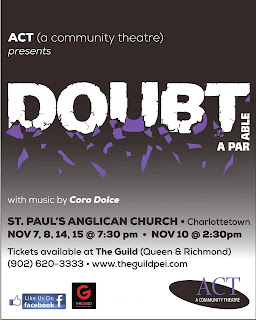 I can honestly say I have never watched a play quite like, Doubt: A Parable.
It made me think, it made me uncomfortable, it made me question and as the title suggests, it left me with plenty of doubt!

The setting and the atmosphere at St. Paul’s Anglican Church in Charlottetown couldn’t have fit the story better. In one of the oldest and most elaborate churches on PEI, a small cast tells a story of scandal occurring in the church in the mid 1960’s; a scandal with plenty of uncertainty and complicated moral dilemmas. A positive and well liked priest, played by Adam Gauthier, comes under suspicion by two nuns, for having inappropriate relations with a student. The younger nun, Sister James, played by Renae Perry, witnesses something that she finds suspicious and relates the story to the school’s principal, an old school, traditional nun, Sister Aloysius.

Sister Aloysius, played by Barbara Rhodenizer, becomes determined to find out the truth, and has an almost irrational fixation on the priest’s definite guilt, even though she lacks any real evidence. Further complicating the matter, the student in question, a young boy, also happens to be the first black child to attend the school. The 1960’s were a time of many social changes, and black people were beginning to be treated equally. When Sister Aloysius has the boy’s mother, Mrs. Muller, played by Tamara Steele, come to meet her and confronts her with the alleged abuse, she makes arguments and justifications I struggled to relate to.

The mother comments on the child’s poor home life, mentioning his abusive and unloving father. The mother says she believes that the priest is a good figure for him to have because he watched out for him, and is a positive male role model. She even goes as far as telling the Sister that her son is of a certain ‘nature,’ implying that he’s possibly interested in other boys. It appeared that the fact that the priest was possibly doing something inappropriate was, in her mind, an acceptable unfortunate circumstance, in a time when her son needed anything in his life that was the least bit positive.

I suppose it’s with these choices where I found myself completely unable to relate to the character of Mrs. Muller. I do understand that during that period, some black people were much more accepting of injustices done to them, because they were gaining more rights, and perhaps felt a kind of fear of losing these rights if they were to cause a fuss over anything (especially a fuss concerning a man of the cloth, and a white man on top of that). However, to let someone continue to cause harm to my child, even if the child is unable to see it as harm at the time, is something I’m just unable to understand. I haven’t lived in the world that Mrs. Muller did, so I can’t speak to the complications that would have surrounded her life, but my brain just can’t accept the fact that a mother wouldn’t protect her child, and personally, it made it hard to really appreciate her as a character.

I must admit I left the play with a lot of questions, which was clearly the intention of the story. I felt very unsure about what I had witnessed and whose side I should be taking. While I might have formed an opinion based on how I interpreted all of the information the audience is given, ultimately that isn’t the point of Doubt. The play was a mental exercise, where we’re brought into the web of uncertainty that is weaved around gossip.

I encourage all those who seeking an intellectual and moral challenge—one great purpose of live theatre—to attend ACT’s production of Doubt.


Meghan Lafferty is a creative writer, born and bred in Charlottetown, PEI, who spends her days writing and discussing story ideas with her cat, Sailor Soupie.