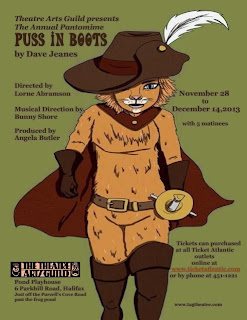 Evil characters, a young man who is cheated, a romance with a Princess, two nasty older brothers, a lonely cook, a doughty Queen, a Fairy Godmother and a very magical cat – all will be centre-stage from Nov 28-Dec 5 at the Pond Playhouse in Halifax as the Theatre Arts Guild presents Puss In Boots. Director Lorne Abramsom gives us the details about the Pantomime production and more!

How long have you been involved in theatre, and in what capacity?
LA: I have been involved in theatre for at least 48 years: Started with Gilbert and Sullivan at McGill University in the 1960s. Then I produced and directed many high school musicals at JL Ilsley High from 1971 to 2004. I have been involved at Theatre Arts Guild as an actor, producer, writer, director, lighting designer, sound and light board operator, and other less attractive responsibilities, for about 25 years. I served on the TAG Board for many years and currently am a member of the Artistic Committee with responsibility of reading and selecting the season.

How did you get involved with this particular production?
LA: I have been involved with most of the pantomime productions over the past 15 years. A few years ago we developed a wonderful team that has been producing some excellent shows. This group has become great friends and includes the current President of TAG, Angela Butler, musical genius, Bunny Shore, Choreographers, Jessa Miklos and Melanie Dumaresq, Lighting and Sound designer Bill Barnaby and ASM Malcolm Capstick.

What are the challenges in putting this work together?
LA: Pantomime is a lovely theatre form that requires a smart script based on a children’s fairy tale, with versatile actors and a large cast. Because it is almost a musical, it requires many more rehearsal hours (almost 13 weeks). All of us at TAG are volunteers and have other full time professions so forming this intensely committed team is a huge challenge. We require multi-talented actors with dance and song abilities as well as the ability to interact with whole families of all ages. Pantomime is aimed at all ages and breaks down barriers.

What are the rewards?
LA: For me, the rewards are multi-fold: the forming of a team that will present the audience with a fabulous show and perhaps be the first live theatre experience for many young people. That is a fantastic reward.

What can audiences expect during the run?
LA: Audiences can expect incredibly talented actors playing outrageous roles wearing very colourful costumes. You can expect to see the absolutely fabulous dame (always in panto), bad guys to hiss and boo at, good guys to cheer for, a very magical cat, an amazing dance troupe called the Cat’s Meow, a Princess with her own love story and of course a Fairy Godmother and many other great characters. There will be loads of laughs and tender songs. 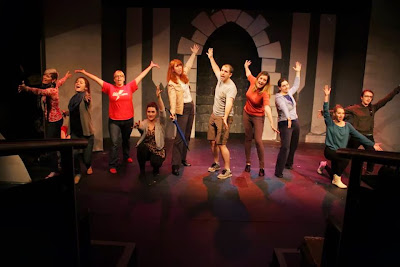 What are your thoughts on theatre in Halifax, and Atlantic Canada?
LA: Community theatre is booming in Halifax and Atlantic Canada. Our 14 shows will be sold out [or nearly sold out] before we even open so people are learning to get their tickets very early. It is an extremely healthy community

What's next on your own theatrical agenda?
LA: I am very involved with the huge high school student leadership organization called the NSSSA, Nova Scotia Secondary School Students’ Association, as the Provincial Advisor. That organization runs 15 conferences per year so I am busy with them. That is a whole other life (although several cast members are actually NSSSA Alumni). I plan to audition for a few more shows with TAG this year.