Chatham, New Brunswick-born Raymond Fraser is the author of more than 20 books of fiction, non-fiction and poetry. His literary canon has been recognized through such as honours as New Brunswick’s Lieutenant-Governor’s Award for High Achievement in English-language Literary Arts and the Order of New Brunswick. Farley Mowat once described Fraser as “the best literary voice to come belling out of the Maritimes in decades,” and over the years the author has developed a broad and devote readership. 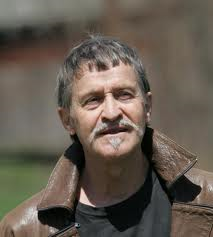 In this interview, Fraser talks about his fifth short story collection, BLISS and other stories (Broken Jaw Press), released in the fall of 2013.

What inspired/motivated you to put this book together?
RF: I started working on the collection in 2011 and finished it a year later. Before this I'd spent four years on my novel THE MADNESS OF YOUTH, and was in a mood to do some things I wouldn't be so long getting to the end of. I could finish a story in a matter of days or at most a few weeks, and then move on to another one. It was a pleasant change after being tied to a single narrative for so long.

Once I'd got the book finished, however, I did notice many of them were about New Brunswickers leaving home for the big city and coming back again—what they did while away and what they were like when they returned, those that did return. There was that much of a common thread.

Did it come together quickly or did you really need to work at it?
RF: I had no real problems. Some of the stories were quite new; others were ones I'd been working at off and on over the years. For example, "McNutt's Dream Girl" was originally published under a different title in Canadian Fiction Magazine in the seventies, but I was never satisfied with it, especially the opening paragraphs. Every so often I'd have a look at it, and when I did I'd make changes. I must have rewritten those opening paragraphs a hundred times, easily, and while about it I'd continue reading and make improvements to the rest of the story. By the time I came to look at it as a possibility for this new collection it was in pretty good shape, just needing a few more touches. I know it reads as though it flowed out intact the first time, but that's how it's supposed to look.

"Camp Borden" was put together from scenes I wrote for my novel IN ANOTHER LIFE but didn't use because I'd had to keep that chapter to a certain length so it wouldn't become too much of a digression from the main story line. But I still liked those "out-takes", and was able to use them for the basis of the tale in BLISS.

"The Antique Collector" had been part of the original manuscript of my Black Moss Press book WHEN THE EARTH WAS FLAT, but because I was over the page limit some things had to be dropped, and that was one of the two pieces I took out. When I reread it later I was thankful I did, because I could see it needed more work. I thought of using it several years later in my book THE GRUMPY MAN (where I put the other omitted story, "The Commissionaire"), but felt it still wasn't ready, so hammered away at it some more. And then when it came time for BLISS I read it and felt it was close to right and made a few more alterations and included it.

I could go on and say something about every story, but there are 26 of them, and it would take forever.

What was the most challenging aspect of the process?
RF: I actually accumulated forty stories for the book, and had to get tough with some and tell them they weren't quite in shape yet and would have to be cut from the team. And with those remaining, there was the question of what order to put them in. For instance, the reason I put "The Cask of Armadillo" second was because it's written in the 3rd person as opposed to the first story "Bliss" which is in the 1st person. I wanted to let the reader know right off that it wasn't going to be a series of tales told by the one narrator, which they might think if I followed with another in the 1st person.

Another thing, some stories were set in the Maritimes and others in Montreal and elsewhere, and I wanted to keep the different locales together and not be jumping back and forth with them. There was also the matter of the recurring character, Macbride, being of different ages; I wanted those together too – except for the final story which was related to the third story, and seemed to make a sort of book-end – and just felt like a good one to end with regardless.

What was the most rewarding part of the experience?
RF: For me writing a book is like being virtuous, in that the work is its own reward, which is a good thing, because there aren't a lot of what most people consider rewards involved. Not every day is satisfying, there are off-days, rough patches to get over, but my overall sense is one of well-being, a feeling I'm doing what I should be doing.

What did you learn during the process?
RF: I'm not sure I learned anything I didn't already know.

How did you feel when the book was completed?
RF: As I do whenever I finish a book…For a couple of days there's a sense of achievement. The job is done and I didn't run out of gas or die in the middle of it. But then I have to go looking for a publisher, and that's a different world. Obviously publishers should be running after me, begging for my latest masterpiece, but they haven't caught on to that yet. People in the future will be amazed about this.

What has the response been like so far from critics and readers?
RF: The decision by Broken Jaw Press to publish the book and the time it came out were so close together that no advance review copies were sent around, so it will be a while before any reviews are seen. As for readers, the responses have been good. The people who read my books are usually enthusiastic about them and want to read more. Along with the writing and getting the work completed, comments from satisfied readers are what make it all worthwhile. There would be no point in it if people didn't like what you did.

What's next on your creative agenda?
RF: I already have a new novel finished. It's called SEASONS OF DISCONTENT, and is about the same length as THE MADNESS OF YOUTH and IN ANOTHER LIFE. I finished it in April of 2013, and am waiting to hear from a publisher. It has passed the first and most important step, which is, I like it myself, regardless of what anyone else thinks. Since I'm a very tough, objective critic that’s an impressive recommendation.

Since finishing DISCONTENT I've scanned two of my early books which pre-date home computers, THE BLACK HORSE TAVERN and THE BANNONBRIDGE MUSICIANS, and while looking at them made quite a number of revisions. I hope to see new editions of these out in due course. I wrote an Introduction to BLACK HORSE TAVERN and an Afterword for another early book, THE STRUGGLE OUTSIDE. So I haven't just been relaxing. What comes next I haven't decided yet, but will soon. There are a number of possibilities. I have no shortage of things to write about.