After thirty years of teaching, Heather Stemp retired and wrote Amelia and Me so her grandchildren would know their roots and the rich history of Harbour Grace, Newfoundland. Late last year, AE spoke with the scribe about her debut Young Adult novel. 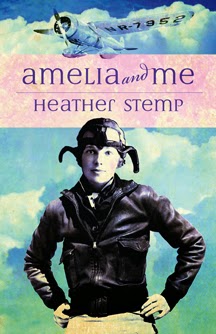 “The process went something like this: oh my God, Amelia Earhart flew out of Harbour Grace on her solo transatlantic flight; oh my God, Uncle Harry was the air strip supervisor; oh my God, Amelia rested at Aunt Rose’s Hotel; and Aunt Ginny (the main character in the book) met Amelia at the hotel and made her soup for the flight; etc.”

What motivated/inspired you to write this book?
HS: What motivated me to write this book was a sense of family history.  My father died in 1993 and my aunt died in 2001. She was the last of the Ross’ from Harbour Grace, Newfoundland.  As the eldest of four children, I knew more of the family stories than my brother and sisters.  If I didn’t write them down, they’d be lost forever.  This book is for my children and grandchildren so that they will know their roots.

Did the work come together quickly or did you really need to work at it?
HS: Because the book began as a family history, it took some time and a lot of hard work to turn it into historical fiction.  I did some of my early research at the National Archives in Ottawa and in the Provincial Archives in St. John’s.  At that time, I was searching for family information in the form of documents and old photographs.  It was when I discovered my family connection to the early transatlantic flights from Harbour Grace that I began to see this as a book.

I have taken a number of writing courses and from these experiences the book has evolved into Amelia and Me. The process went something like this: oh my God, Amelia Earhart flew out of Harbour Grace on her solo transatlantic flight; oh my God, Uncle Harry was the air strip supervisor; oh my God, Amelia rested at Aunt Rose’s Hotel; and Aunt Ginny (the main character in the book) met Amelia at the hotel and made her soup for the flight; etc. With this new knowledge, I returned to Newfoundland many times to interview Ginny’s friends and relatives.  I also made many more trips back to the National and Provincial Archives.  Some of my other research was done in the Canada Aviation and Space Museum in Ottawa, the Railway Museum in St. John’s, and the Harbour Grace Museum.

When people ask how long it has taken me to write the book, I find it hard to answer.  The whole process has taken 10 years but I’ve lost track of the point where the family history focus ended and the book focus began.

What was the most challenging aspect of the process?
HS: The most challenging aspect of the process was learning how to write a book.  As a teacher, I knew how to do research, to keep notes, and to sit at a desk for long periods of time.  I didn’t know the elements of writing a novel.  I am much better than I was when I started but I still have a lot to learn.

What was the most rewarding part of the experience?
HS: This is a difficult question because there have been a number of rewarding parts of this experience.  I’d have to say the most rewarding part has been the people I’ve met along the way.  Shannon Ryan from Memorial University is a mentor and friend.  I consider his wife Margaret a friend as well.  The people I interviewed in Riverhead and Harbour Grace also became friends.  Because they were friends of Aunt Ginny’s and could remember Amelia’s flight, they were quite elderly.  Since most of them died before the book was published, I consider it an honour to have known them. The people at Flanker Press have also become friends.  The book also gave me the opportunity to reconnect with my family in Harbour Grace.  I took my two sons, my daughters-in-law, and my four grandchildren to the book launch in Harbour Grace.  Now two more generations of family have made connections.  What could be more rewarding than that!

What did you learn during the process?
HS: I learned that a 68-year-old grandmother of four can write a book if she’s stubborn enough.

What has the response to the book been like so far?
HS: The response to the book has been very good.  It was written for middle grade readers, 9 to 12 year olds, and they seem to be enjoying it very much.  What has surprised me is the number of adults who have told me they love the book.  Parents and grandparents are reading it and buying it for their children and grandchildren.

What made you want to be a writer?
HS: I was always a reader so I had a great respect for writers.  Being a writer was one of those "wouldn't it be wonderful" thoughts that I had over the years. I was always jotting down ideas on scraps of paper. While I was teaching, I told myself I didn't have time to write. Retirement removed that excuse so I finally had to face the reality – write or give up the idea. As I mentioned previously, I started with a family history focus and the novel grew from there.

Are they the same reasons you do it today?
HS: I have more of a sense of my grandchildren today. They're the reason I thought of the family history in the first place. I write for them. I also write because it gives me a sense of satisfaction and structure in my life.

Is your creative process more one of inspiration or perspiration?
HS: Definitely perspiration!

In your estimation what makes a good book?
HS: To me a good book is one that I think about after I've finished reading it. Usually it is the characters I remember and continue to think about. Themes and a strong sense of place will stick with me as well.

Do you have any advice for aspiring writers?
HS: Learn the craft of writing. I did so through courses – some face to face and some online. Then don't give up. I can't count the number of drafts I've written of Amelia and Me. Write and then rewrite, rewrite, rewrite – with informative feedback from a good source, for example, a writers group, a professional association, or a mentor.

What's next on your agenda?
HS: Amelia and Me is the first book in a series. I'm currently working on the second book, which doesn't have a title yet.