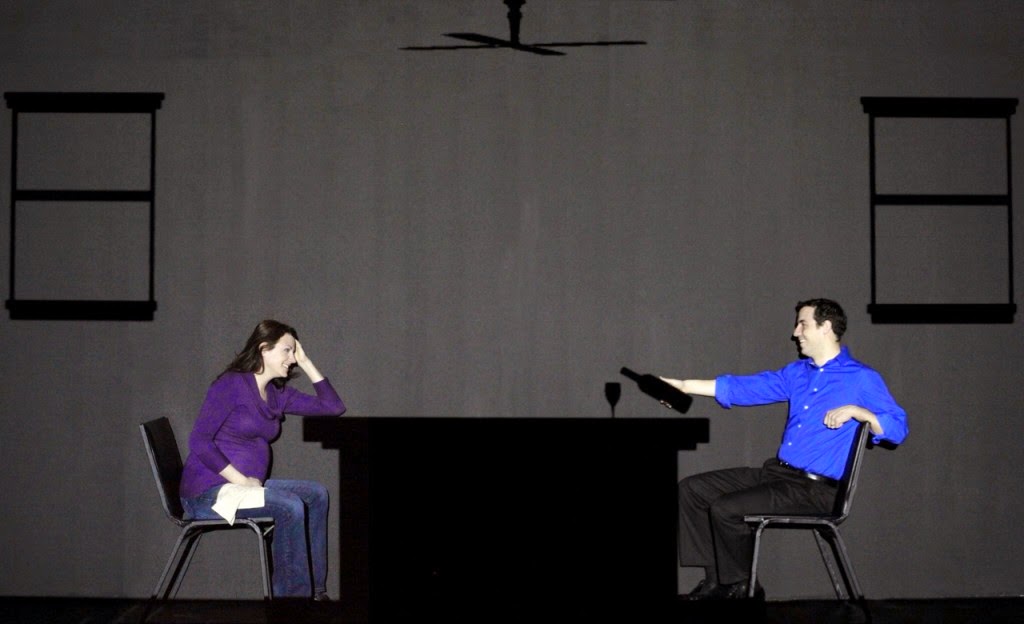 The Magnetic North Theatre Festival continues tonight with When it Rains, a play in the form of a live-action existential graphic novel. When the improbable happens, two couples are beset with misfortune, communication fractures, and relationships crumble as behaviours becomes absurd. People sing, get naked, give up, lose control, and even have sex with strangers. Some kind of God intervenes. Or observes. Or something. Or nothing. Writer-director Anthony Black explains.

When and why did you first become interested in theatre?
When I was nine, a friend of mine told me he was taking a class at Neptune Theatre School that I should come along. It was a lot of fun and I took classes there for years.  I kept performing in High School shows in my teens. I think I liked the laughter, the sense of play, and the friendships formed.

Are they the same reasons that you continue to be involved today?
Largely, yes. I still love laughing and playing with friends. It's not that there isn't hard work, but play is the most important thing to creating something.  I watched a YouTube video of John Cleese doing a speech from on creativity  and he talks a lot about play- playing in your imagination- "what if we did this crazy thing?" or "what if we tried  that?". To imagine a bunch of stuff and then get to realize it and share it with an audience... that is a great feeling.  Don't get me wrong though - there is lots of hard work: experimentation, rigorous assessment, merciless editing, and assiduous crafting on the way.

What are the challenges of the vocation?
There are lots of challenges. It's a hard industry because there isn't a lot of money, which I think most people realize. And because there isn't a lot of money, there often isn't time. To have enough time to make something that's really strong, you have to push hard to create the conditions that give you a good chance of success. If you don't give yourself time to try, fail, adapt, and try again many times and in many ways, you're going to end up with work that is sub-par. It's a challenge to create the conditions for success. Theatre is also a highly localized art-form. It only happens where it happens. You can't stream it. So you're dealing with a small tranche of a local population that might come to see a show within a given run. And it's only on when it's on. You can't go to Video Difference and rent my play. You've got to see it during the short window it's running. And life is busy and people have lots of less expensive entertainment options. Unless it seems like it's going to be a really special evening, why should they go to the theatre? The challenge is giving a very good answer to that question- making an event that is truly special. Another challenge, this one related to making theatre in Halifax: our population is not huge and frankly, there are a lot of people who don't go to the theatre, or if they do, only go to Neptune. Our company, 2b, has worked around that by doing a lot of touring- we play to more people outside Halifax (in Canada's larger centres, but also in New York, Australia, New Zealand, the UK, and Europe) than in it. We've built an audience here but we want it to be a lot bigger. I would still love to feel like we're able to serve more of our fellow Haligonians. We are employing a number of strategies to do that and we certainly hope the being presented in the context of the Festival will introduce us to new audiences.

What are the rewards?
I love my job. There are a lot of jobs where there is a lack of autonomy, or you can't see the results of your work, or you feel your work doesn't matter. When I get to an opening night, especially of a new piece, and say to myself, "this wouldn't exist if we hadn't made it", the satisfaction is hard to describe. If the show affects an audience, it's very special. (If it doesn't affect the audience and people don't like it it's like being in a tag team wrestling match against depression and anxiety. But that's another story.)
There is also the reward of friendship. You get very close to people in this industry. That is one of the biggest rewards.

Is your creative process more 'inspirational' or 'perspirational'?
I used to say I had two ideas worth pursuing every year. Now I feel like I'm down to one every two years. But frankly some of this is because in my professional life as artistic co-director of 2b, much of my creative energy is put towards the running/ marketing/ organizational design/ sponsor stewardship/ narrative development/ community relations of the company. Which takes me away from and provides a handy excuse to ignore the work I should be doing- the work of a creative artist (writing, reading, drawing, going to shows, museums,etc.). If you sit down regularly and do the work of creating, you're way more likely to create something than if you just wait around for inspiration to strike.

What inspired When it Rains?
There were a few different sources of interest that got combined. First of all, I was interested in working with designer Nick Bottomley to see what it would be like to light an entire show using only a projector. That was the formal idea. As for the thematic stuff, as a kind my dad was a gifted mathematician and became an actuary (somebody who assesses risk for insurance companies using very complicated math to calculate probability). I also grew up going to church with him and one of the Bible stories I remember was the story of Job, a man with health and wealth and great faith. God (or actually, Satan, with God's go-ahead) takes away all of the blessings in Job's life to test his faith but Job remains steadfast. I got to imagining, what if Job were an atheist? What "faith" would he have? When it Rains is ultimately about four people, each with their own proclivities, but the protagonist is a mathematician who believes ardently that events don't have any particular meaning, rather that they are just the product of probability and randomness.

What can audiences here expect to experience?
First off, the play looks unlike most plays. The actors interact with projected objects and environments that we can make appear or disappear with the push of a button. And it's all within a projection area, like a movie screen with live actors inside it. It looks like a graphic novel and we drew on some aesthetic ideas from graphic novels for the production. Some of the illusions we create (like a scene of a couple in bed that is done from a birds-eye-view) are pretty fun to discover. Secondly, the story is blackly funny. There are some really intense scenes but there is always a streak of humour running through the play. I like that the play rides that knife edge of humour and pathos. 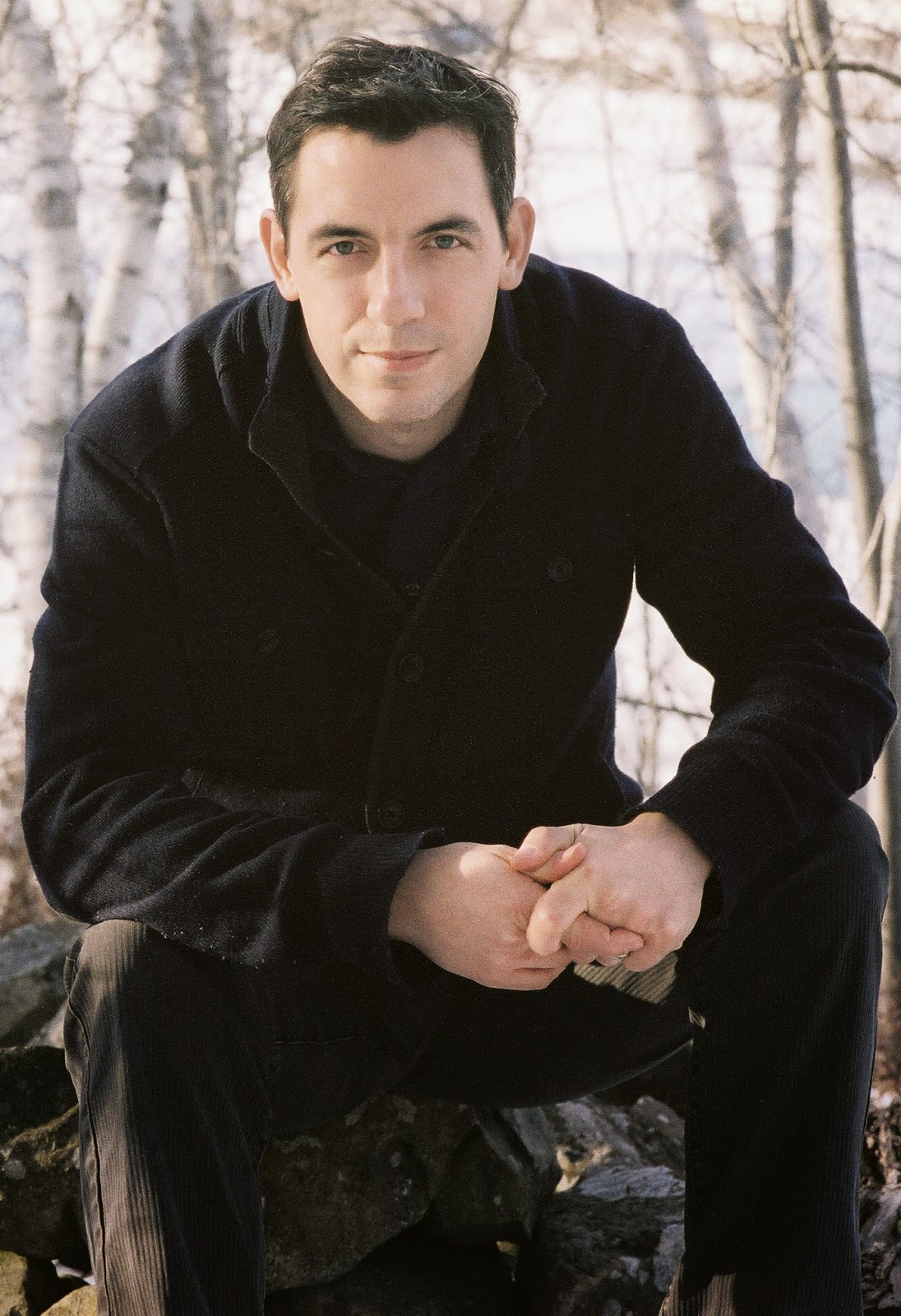 What are your thoughts on the current state of theatre in Canada?
Theatre has many different manifestations, but there are various trends in Canada, from regional theatres to festivals focussing on the classics, to creation based companies like 2b, to performance makers who are trying to eschew many of the core notions of theatre (things like plot, character, and conflict). I think this variety is a strength and there shouldn't be just one kind of theatre any more than there should be just one kind of sport. However, I do think it would be great if, as an art-form, theatre had a higher batting average (just to mix up my sports analogy). It is hard for audiences to take a risk on exciting new ideas or even on the notion of going to the theatre in the first place if their past experiences have been less than exciting.

What can we be doing better?
Depending on who "we" means in this context, I'd have different answers. "We" as a theatre community need to continue to develop our craft, push for optimal conditions to create high-quality work (for instance, by resisting the trend of shorter and shorter rehearsal periods), and be frank in our assessment of our own work instead of blaming the audience for not getting it. "We" as a theatre going public should stop blaming ourselves for being bored at a play. Blame the artists. Demand better. It'll make us artists work harder.

What's next on your creative agenda?
2b is taking both When it Rains and another show The God That Comes to the Edinburgh Fringe Festival in August.  I'm also developing a play with Montreal playwright Michael MacKenzie about a chance encounter between Sigmund Freud, Minna Bernays (Freud's sister-in-law), James Joyce, and Nora Barnacle (Joyce common law wife) in the Sistine Chapel in 1907. It's a huge project, incorporating some technology and design ideas that we started developing with When it Rains.