Searching for Abegweit: The Island Songs & Stories of Lennie Gallant 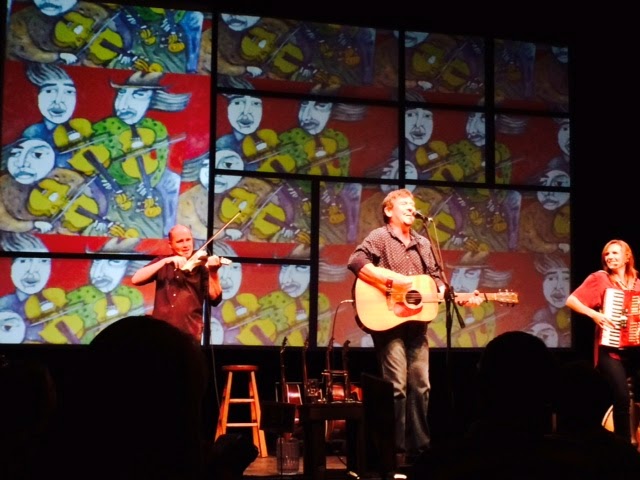 Mack Theatre (Confederation Centre of the Arts)
Show dates have been extended into the first two weeks of September!
$25.00-$30.00
Directed by Jac Gautreau

When I arrive for the show, the stage is full of instruments. Celtic bodhráns, a piano, drum cases, and five guitars all line up in restless enthusiasm. A red accordion awaits. And suddenly the crowd explodes in a vibrant burst of energy--roars and claps and whistles--as Lennie Gallant and his band take the stage at Confederation Centre of the Arts’ Mac Theatre.

Welcome to Searching for Abegweit: The Island Songs & Stories of Lennie Gallant, the show that everyone's been talking about on P.E.I. this summer. As Gallant erupts into song in “Cradled on the Waves,” my island roots begin to tingle. The Mi’kmaq legend about the character of Glooscap, the creator, and how he keeps Prince Edward Island for his pillow resonates with me. 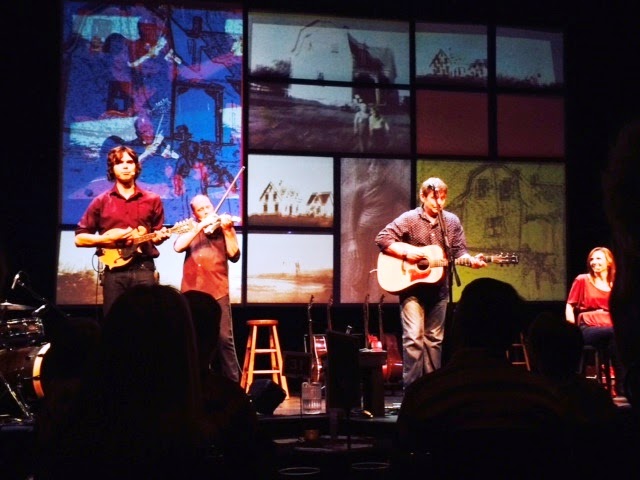 The PEI reverie continues all throughout the production, as Gallant and his lively band share the music, legend, history and heart of this beautiful island. Part of me feels like I've just walked into a Prince Edward Island kitchen party, with fiddles and step dancing boards, the old traditional tunes mixed in with the new experimental surges of youth. Fiddler Sean Kemp joins Gallant onstage, his long time musical companion, as well as passionate players Caroline Bernard on accordion, and Gallant's two nephews Jeremy and Jonathan Gallant on drums and keyboards. I love that this is a family affair.

As I'm bouncing and swaying and tapping through the band's tunes, I'm also captivated by the artwork that surrounds Lennie. The work of his sister, artist Karen Gallant, is put forward to the audience on twelve large panels in a series of projections. The two mediums blend seamlessly together, the telling of the stories of PEI with the colour and depth of the landscapes; the two creating a love letter to the land, to the sea, and to all the mysteries in between. It's all there: potato fields and farmhouses, trees, boats, the reflection of the moon on the ocean, and the telling guitars that the Gallants must have grown up with. In birds and docks and whales that lurk, Karen's art is intoxicating.

Historical photos of an island not too long gone appear in Gallant's “Country Store” and rich, Scottish tartans are projected behind him as his voice fills the room with story and song of migration and settlement. I find this style of back and forth compelling: from word to music, the sweet melodies of Bernard’s Acadian tunes hitting the high notes between Gallant’s rich tales of the passion and promise of Prince Edward Islanders in search of a better life. Jonathan plays his drum kit, changing it up from the marching snare to a washer box, all perfect incantations signaling the ache or the beat of PEI’s own heart.

Gallant also sings in French, an homage to his Acadian heritage, before turning to more serious fodder of the importance of our oceans. “We need to urge our local governments,” he says, strumming a little, “We have to take care of the ocean so it can take care of us and of our children and of our grandchildren.” And of course what follows is “Peter's Dream” (YouTube, Stan Rogers Folk Festival, 2009), Gallant's heartbreaking story of the Maritime fisheries.

Searching for Abegweit is a rich tapestry of storytelling and heartwarming song, the perfect notes floating up and into the acoustics of the room. Lennie Gallant delivers the burst of emotional intensity that carries this show all the way through as he sings, “Gently rock me home tonight, sing to me your song, when I hear your lullabye, I know where I belong.” In Searching for Abegweit, we all go home, no matter where we're from. 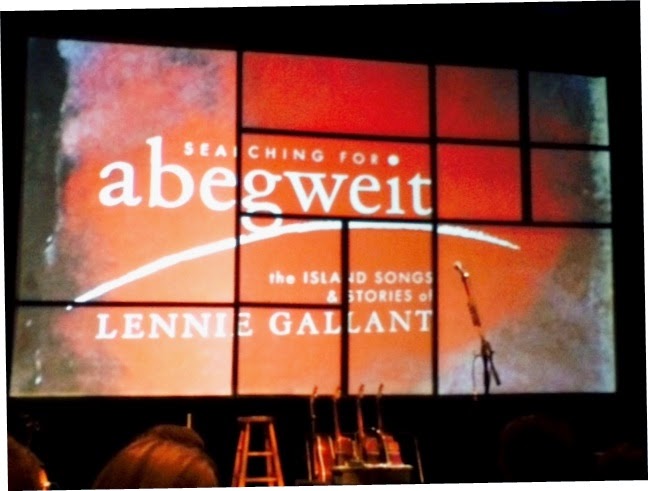