Story | A Portrait of Home Through Song and Story 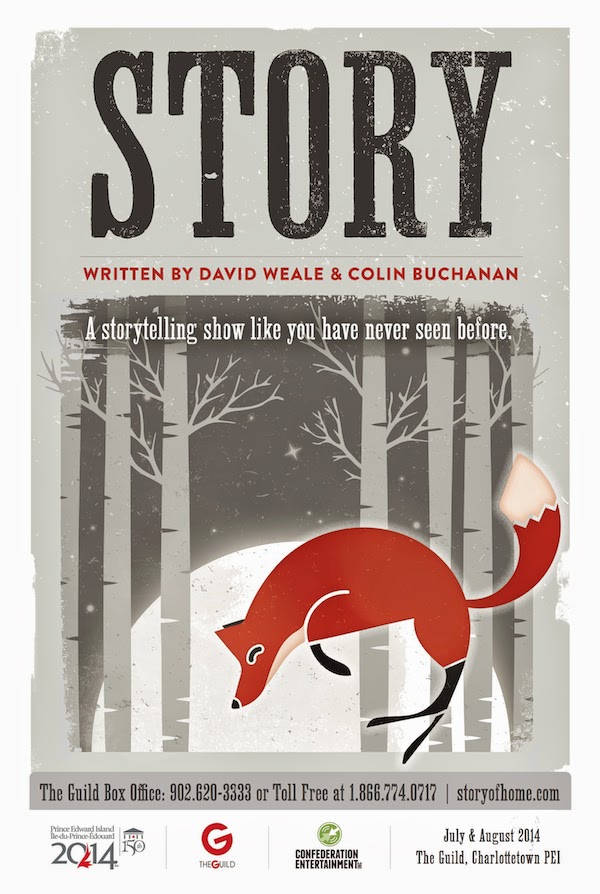 Story is presented at The Guild in Charlottetown through August.

Welcome to the magic of Story. Creators Colin Buchanan and David Weale offer a soulful feast of story and song, and the audience ingests the Prince Edward Island stories as ravenously as any juicy bit of gossip. In Story, we're invited to look a little closer at the things that make up our stories of home: farming, wakes, politics, and what it means to be an islander.

I loved the concept for this show. Storytelling shows have long been a mainstay of Island stages, yet this one is different. Mike Walker plays the wonderful character of Story, a simple yet richly philosophical character that some have likened to the Willy Wonka of the production, with dark stormy curls, ponderous declarative statements and provocative questions. “We are human,” he says, “We reach out for milk, we reach out for love, and we reach out for story.”

Story, in his red vest and tailcoat, is tasked with taking the audience on a journey, the inside story of stories themselves. He becomes our vessel to fill, and uses local storytellers and musicians to illustrate the power of the tales we tell.

I took David Weale out for a coffee to get a bird's eye view of this production. “That's the treat that people get, they get to see inside story itself,” Weale said. Even in the scene of the wake, he says, “story turns the heavy metal of grief into the soft remembrance of memory.”

He also mentioned that he loved working with Buchanan, an award-winning musician and producer. “His youthful freshness and enthusiasm was a perfect match for the benefit of my experience.” Director Buchanan blends footage of Island people with storytellers Alan Buchanan and Hank Stinson, who honour them for a sparkling moment by giving them the stage.

The storytellers are delightful. Renowned Island storyteller Alan Buchanan brings laughter and reflection to his main role in the Arts Guild production of Story; while long-time Island actor Hank Stinson carries on with ease and grace. The two exchange local humor and famous island stories from the Redhead Road in Morell, poke fun at the powers that be in Prince Edward Island, and describe the time waiting for the ferry as “quality time with islanders”. These are all part of our fabric as Islanders, the rich patches and patterns of our stories as they fly through time and space.

“Music is the vehicle, storytelling behind the wheel,” Story proclaims.  The audience is riveted by Ashley Condon, representing the feminine mystique, who fills the room with song but who also acts as one of the main storytellers: a chariot for love, daughterhood, and living with a mom who was an Island fisherwoman. The youthful talent of Dylan Menzie also brings much to the production, including a musical intensity and focus in his song about the end of the family farm.

Weale currently spends most of his days editing and curating his own publication, Red: The Island Story Book. You could say he's a professional storyteller. I asked Weale why storytelling is more important than ever. He explained that this show, and storytelling in general, is a pushback against mass media, that we’ve become cultural voyeurs in a world of YouTube, Facebook and Twitter. “There are no particularities of place,” Weale said, “It's somebody else imagining your life. It's time for us to tell our stories, the stories of who we are. It's real.”

I ask David if our stories are the same, or if they're changing. His answer surprises me. “They need to change, Maureen,” he says. “The stories we've told have produced tremendous unhappiness. It's time to change the narrative, and we have the power to do that. Story is just a costume.” This hits a chord with me as I reflect upon my own life, and the stories that I've told.

In Story, Prince Edward Island stories are showcased and projected to the world. Weale adds that although the centre of his philosophy is “the particular to the universal”, without the story, nothing would exist.

Story is a show not just for Islanders, but for tourists alike. It's enjoyable for all generations, as we are all crafting our own beginnings and endings.

Story reminds us that “In story, we learn about ourselves, we document our lives, and we define our communities.”

Walker adds slyly, with a wink and a nod that, “I am Story, and there's no place in this world that I am not welcome.”