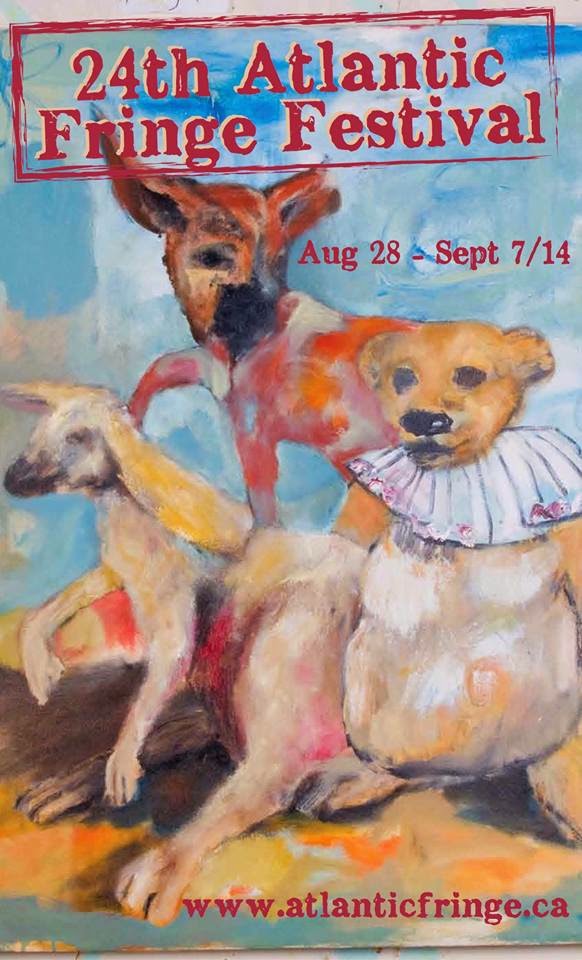 Martin Wallace describes his “oh-so-risky” experience at the Atlantic Fringe Festival in Halifax, and delves into three of the plays which you can still attend today and tomorrow:


Fringing, let’s face it, is a risky business. There’s the often sweltering venues, the occasionally amateurish acting, the sometimes offensive-for-the-sake-of-being-offensive storylines and dialogue. (This nadir for me this year was the audience member who decided that, since he was himself a performer, he should somehow be part of every performance he saw.)

But that risk, the risk that you might be offended, be bored, be filled with the wish that you could be somewhere—anywhere—else, is precisely what makes those of us who attend the Atlantic Fringe Festival come religiously year after year, seeing as many plays as our time and budgets will allow. Risk is what makes the experience so enlivening and, yes, I’ll say it, in many ways superior, to sitting at home watching TV shows that have been repeatedly network-noted and focus-group-tested, polished until your final experience of them is guaranteed to be exactly the same week after week.

This year, I attended only a handful of shows, but three of these stood out for me. Each of these shows was in a form that, to be honest, I generally dislike. Fringe festivals tend to abound in one-person shows, “edgy” comedies, and “performance pieces.” There’s nothing inherently wrong with these forms, but in most cases I’ve seen the shows overemphasize spectacle over narrative, quirkiness over profundity, clever over naturalistic dialogue. The aggressive attempt to make something “new” ends up creating pieces that are in their own way, somehow all the same. The “risk” I took in attending these three plays, however, paid off, and showed that talent and thoughtful writing will succeed in any form.

Plan B, with its shelves full of items that are kitsch for the young and nostalgia for the old, is the ideal venue for Katie Dorian’s one person show, How Often Do I Dream. The ostensible subject of the play is Dorian’s memories of her Opi and Omi, but it’s really an hour-long examination of the significance of memory itself.  As you enter the space, you see a wall with photos and newspaper clippings alongside individual servings of jello (the significance of which becomes apparent later). You’re greeted by Dorian herself, an incredibly charismatic performer, who asks your name. At the end of the show she recites every audience member’s name from memory. After stories of her grandfather’s Alzheimer’s and the question “If you no longer remember yourself, who are you?” what could seem a simple parlour trick becomes the philosophical climax to a profound and moving experience.

Another autobiographical one-person show, Andrew Bailey’s The Adversary displays an equal level of profundity. Based on Bailey’s experiences as a church caretaker in Vancouver’s East End, save for a small folding chair the play needs neither set nor props. Bailey’s recounting of his encounters with drug addicts (and a smug UVic student) is compelling and politically and philosophically complex. The age-old theme of deciding how does “good” exist in an imperfect world is for Bailey and his listeners a practical problem with real consequences, and Bailey’s considerable storytelling abilities fully engage his audience until the end.

Bald Monkey Theatre’s production of ‘Dentity Crisis transcends its somewhat clichéd storyline (look up how many fringe plays over the years have dealt in some way or another with schizophrenia), by the sheer physical commitment of the troupe. Each actor must play several characters—often during the uttering of a single sentence. It’s an exuberant, chaotic, and somehow still focused series of performances as the actors bring every part of their bodies into play. (While all of the actors are excellent, particularly notable is Jonathan Walls as the main character’s father, brother and grandfather and as a French Count.)  It’s exciting theater.

I saw a few other plays—some, to be honest, that were a waste of time, that had me checking my watch every five minutes. But this is part of the experience too. At least for me part of the fun—the joy—of the fringe is sprinting from venue to venue, keeping my mind open, knowing that the outcome of great risk is now and then great reward. I’m happy that I got to see these three plays and am looking forward to next year and another joyful, exuberant, oh-so-risky Fringe.