Red: The Island Story Book is a Celebration of Storytellers 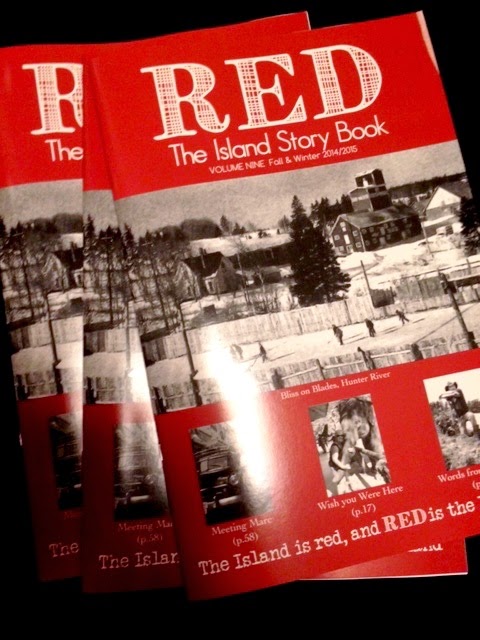 It's a Friday evening at Charlottetown's Y Lofts and Red: The Island Story Book is launching its 9th issue. The soft light glows and the house is packed, with frontman and Editor David Weale introducing readers, musicians, and Chef Michael Smith's Red holiday cookie recipe, from his column "Home Cooking".  There's something in the air here, or maybe it's the warmth of Prince Edward Island hearts.

Weale has started a movement on PEI, and people are seeing Red. Styled after a third generation family magazine, Weale released the first issue in the fall 2010, and it now has a distribution of over 4,000 copies and over a hundred subscribers. With its long oversized pages, black and white photos and large fonts, Red has a unique style all its own. And wait until you hear its stories.

Weale welcomes the crowd and introduces his first reader, an older man with greying hair with an anecdote called a "Ferry Tale".  Time is a common theme for Red, and so is finding home. We are here to celebrate storytelling tonight, and I drop my head in quiet reflection as the man reading speaks to the ice boat, the car ferry, the bridge or the airplane that brings us to Prince Edward Island, but more so to the mystical sense of home we carry within us, adding thoughtfully, "Sometimes I wonder if we ever left."

These stories of home are in the narrative style of Prince Edward Islanders: folklore of Tignish, up West or down East, tales of good neighbours, and the smell of hot baked beans and biscuits in a country kitchen. The politics, humour, stories, and photographs taken in our homes and gardens stand in the magazine as a testament to who we are, and to where we've come from (even if that's the outhouse or the bootlegger's).  In four short years, Weale has built more than just a magazine; he's built a community on the stories that have shaped our lives, and a platform for sharing them. And he's not done yet.

Weale's writers are marching into the future, and Weale is proud of that. He said that Red pays attention to particularities of place, especially as we enter the age of cultural voyeurism and touting the mass networks of YouTube, Facebook, and Google. Red pushes back, Red asks for more. "Without the story, nothing exists, and PEI is our grain of sand."

We break to snack and mingle, and Weale's daughter-in-law serves sushi and flatbread. An artist herself, Chloë Weale is Red's illustrator and graphic designer, while Weale's son, Davy takes care of advertising and distribution. Red truly is a family business, and as Chloë bounces Weale's granddaughter on her hip between preparing apps, it reminds me that she is continuing the traditions of our grandmothers, feeding the hungry men in from the potato (\pə-ˈdāe-dā-\) fields.

Author Jill McCormack and I share a glass of wine and she tells me the famous story about her first piece in Red. She brought a piece down to David, whose editorial eye scanned critically, confessing that it just wasn't ready for Red. Infuriated, McCormack went straight home and wrote a new story called, "Rejected by Red", an impassioned tale of injustice and betrayal. The next day, she brought it back down to David, who countered her with, "Now there's your story!" and agreed to publish it straight away.

I ask her what the thrust of Red is, and she holds her arms out to encompass the whole room. “It gives writers in PEI a voice," she says, “and an opportunity to be heard, to share our Island's stories. There's nothing more important that that.”

Writers, yes. But not all Weale's protégés are craft writers like McCormack. When I asked Gary Evans how long he's been writing, he shakes his head. “I'm a lawyer,” he says casually, “I've always been a storyteller, but I never wrote them down before.” He tells me about his abrupt transition from “Toronto, Ontario to Morell Rear” (a back road behind Morell) when he was nine, and the shocking transitions he went through as a young person learning the ropes on PEI.

He tells me how David Weale, his Canadian Studies teacher at UPEI in 1980, recognized in him the inherent qualities of a good storyteller: attention to detail, clever impersonations, and you got it, classic moments of truth. Weale solicited a story from Evans for his first issue, and by Red's next issue, Gary's stories will have been in eight of ten issues.

Something Evans says really sticks with me. Evans calls it, “the life footprint”, and he illustrates it in several small stories, cutting himself off from one to go into the next. He says that in Toronto, his life footprint was small. He hung out with three Italian kids, in a small neighbourhood and his parents struggled to get by. He says he didn’t know much about life, and that living on PEI has given him a real education. “It's a full community spectrum, here,” he says, “you know old people, you know babies, you know sick people, farmers, jewelers, potters. You know everyone. We live together and we die together. Our stories are as alive as we are intertwined.”

I'm tapped on the shoulders by a grade school friend's parents and I turn around for a quick hug, suddenly intertwined myself. The one question Gary doesn't ask me is, "Who's your father?" although by the end of the interview, the answer is clear. He has identified my clan.

It's time for more stories and songs and David Weale is back at the mic. He introduces Mary MacGillivray, and while her gentle Celtic voice sings softly, "Brother, don't give up, love will carry up, ignites the spark to light the dark and guide us home," I look around to all the sparks that Red has made here, tonight.

And I'm reminded that somewhere, another island story has made its way from St. Peters to Miscouche, in the willows and the wind and with the magic of intrigue and laughter¾and I'm happy to say that I was part of it.

To learn more about Red: The Island Story Book and purchase issues of the magazine visit:
www.turretbell.com/product-tag/red-magazine/
You can also purchase copies in stores from the “Tignish Co-op to Souris Pharmasave and everywhere in between.”

Mo Duffy Cobb lives in Charlottetown PEI, a place where art and culture soar. She is a voracious writer, an English teacher and a graduate of Vermont College of Fine Arts in Creative Nonfiction.
http://furthermo.com/