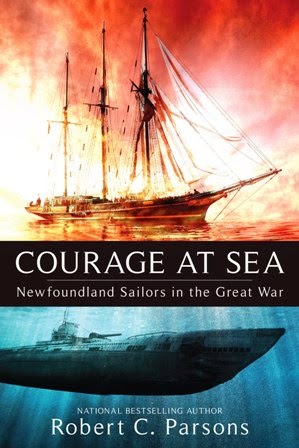 Courage at Sea: Newfoundland Sailors in the Great War is a collection of more than forty World War I stories involving the Newfoundland Royal Naval Reserve and the Newfoundland merchant seamen who delivered goods to Europe in aid of the Allied war effort. Recently we spoke with author Robert C. Parsons about his latest effort.

What inspired/motivated you to write this book?
I saw a need to document Newfoundland and Labrador involvement in World War I from a different angle – that of the battle on the Atlantic Ocean. I knew there were many stories of Newfoundland Royal Navy Reservists  (R.N.R.s) who served and fought on British ships, protecting England from enemy subs, or U-boats as they were also called).
In addition scores and scores of mariners carried fish and supplies to Europe, especially England, on sail driven schooners. These ran a gauntlet between Atlantic storms and German technology, U-boats, torpedoes and mines. These mariners on schooners from every coast in Newfoundland were unescorted, did not travel in convoys and the crew were untrained in defensive or offensive war tactics. Many were intercepted and sunk; often crews were allowed to row to land, some were taken prisoner of war, many simply disappeared on the ocen.

Did it come together quickly or did you really need to work at it?
“Courage at Sea” it came together quicker than usual but, of course, the writing involved intense research and verifying facts and ships for several months. Part of the reason it jelled sooner is because I have been writing of the Atlantic and Newfoundland now for twenty-five years so I knew much of the background material and knew where to look for other more obscure matter.

What was the most challenging aspect of the process?
A. One of the challenges for me was deciding whether it would be one long narrative of World War One at sea or to have shorter chapters featuring a ship, a person, a battle and so on. I think the 40 shorter stories was a better format. Each story stands on its own. I find the average local reader prefers the short story format.

What was the most rewarding part of the experience?
I was richly rewarded to discover previously un-recorded (in Newfoundland books, at least) or unwritten tales of endurance and courage “guts and toughness” of our sailors from every port, cove, harbour and bay. Also after the book appeared several people came to me whose great uncle or grandfather was one of those I had written about - very gratifying to hear a thank-you for preserving his name and deeds.

What did you learn during the process?
A. Newfoundland sailors and mariners were dubbed the best in the world at that time, as spoken of by Brits from Churchill and on down through the Lords in the British parliament. It was said that if these boys in blue had been better educated (as many were unable to read and write) they would have risen to become captains and officers on England's WWI fleet. As well, it was surprising to me that so many Newfoundland schooners disappeared between 1914-1918, losses attributed to being intercepted by enemy U-boats. And these were men and vessels from various places like Burgeo, Grand Bank, St. John's, Carbonear and many other outlying towns.

How did you feel when the book was completed?
I guess most authors feel gratified and relieved when a piece of work, whether fiction or non-fiction, is finished. For me having this book appear on the bookshelves at the beginning of the 100th anniversary of the Great War, rather than halfway through, was important

What has the response been like so far from those that have read it?
I tend to rely on the response of my readers in various parts of NL for feedback. Many have enjoyed the stories and appreciate the focus of “Courage at Sea” on the marine battles of the Great War. 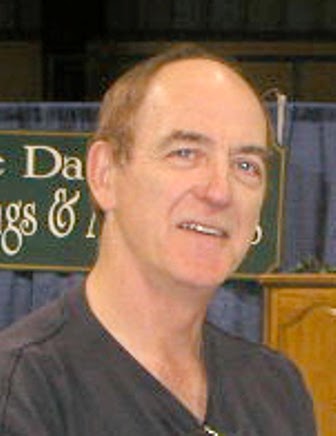 Is your creative process more 'inspirational' or 'perspirational'?
Since I write non-fiction I have to rely on physical searches and paper research; thus I thumb through much background writings, especially local and Canadian newspapers, looking for old photos, making phone calls to children or grandchildren of seamen and double checking facts and figures. It's manual labor intensive.

What makes a good book?
When readers, especially those who have been following my work for years, say this book is not only a pleasure to read, but important in terms of documenting the Great War on the Atlantic.

What's next on your creative agenda?
I have a book in the “mill” now, getting down to a fine grind, currently being edited, (again) and revised. It's a compendium of short – a one or two longer – tales of crime in outport Newfoundland and Labrador. Everything from petty theft to murder and all in between: arson, smuggling, slander, prison breaks, bootlegging, barratry, mutiny to manslaughter. Currently its working title is “From Murder to Mischief: Crime in Outport Newfoundland” but no doubt that will change (for the better). That is slated to appear in the summer of 2015.