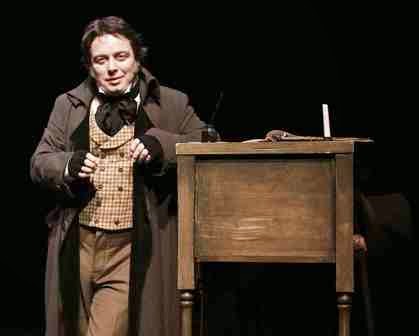 All good things must come to an end, and Jeremy Webb’s annual comedic one-man take on Dickens’ classic A Christmas Carol is no exception. Recently, AE spoke with the Halifax-based thespian about what audiences can expect this holiday season.

Rumour has it that this will be your last year presenting A Christmas Carol - is that true?
The rumours are indeed true.  After eleven years and over 500 performances of this version of the show, I am going to take some time away from it and cast someone new, exciting, and fresh in the role. The show will go on and the new guy will be great! It's a bit like Dr Who regenerating - the show goes on with a different face. I think we will even do some kind of special 'hand-off' show next year, where he takes over in the middle, or at the end. I'm not sure yet, but it will be good to see someone else sweating the butt off for 90 minutes.

Why the decision to bow out now?
I'm getting on in years... No, actually, it just feels right to take a break from it. I love doing it and will enjoy those final four shows at Neptune this year. That's the stage where it was all created in 2003, after all.

What will you miss most about the role?
Oh, easily the interaction with the audiences. The laughter of the children is so contagious and it's that which has kept me going so long. Of course, getting to play such an iconic character has been a treat, too. To play the range of emotions that Scrooge goes through in one evening is a challenge that I enjoy, but then to also have to play many other roles too...that's the special thing about this version that I love.

Looking back over the years, what have been some favourite Christmas Carol moments, and-or performances?
There is audience participation in this show...sometimes it's planned for. Sometimes it just appears out of nowhere. I have had 500 grown men up on stage with me, playing the street urchin boy who Scrooge sends off to buy the turkey at the end of the show. I thank them all for helping me create a very strange, silly and fun ending to the play.

You've been touring the production through the US for the last while - what has the response been like there?
As I write back to you now with these answers we are setting up at a theatre called Thalian Hall, in Wilmington North Carolina - a theatre where Wild Bill Hickcock played, as well as the actual Tom Thumb. The US audiences have been great. This is our third time back down here in NC and Georgia with one or more of my shows. They are so welcoming and love hearing about Nova Scotia.

What can audiences expect in Halifax this year?
The show has always changed each year. Two years ago we added projections... the jokes, the puppets, the silly fun and the very traditional telling of Dickens' great story are all still there. It's such a good way for a family to spend some time together, laughing. I hope that people use our two boxing day shows as an excuse to get out of the house and out from underneath the turkey-hangovers they'll be experiencing.

Would you consider reprising the role at some point down the line?
Never say never. I am sure one day I'll return to it.

What do you have on tap for 2015?
Next up for me is the addition of a second son in January, then I go into rehearsals for Neptune Theatre in the play Rexy. After that I am producing two shows in the Neptune Studio Theatre: Karen Bassett's great play about female pirates, Heroine, in April. We follow Heroine with Shakespeare's MacBeth, in which I finally get a chance to play the title role, in May. Both plays are on sale now at Neptune, or via my website. 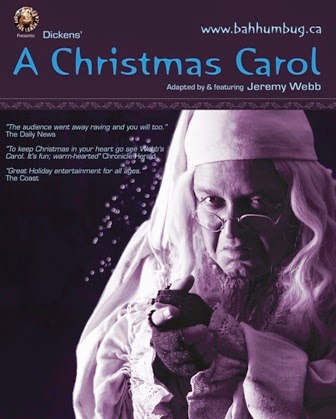