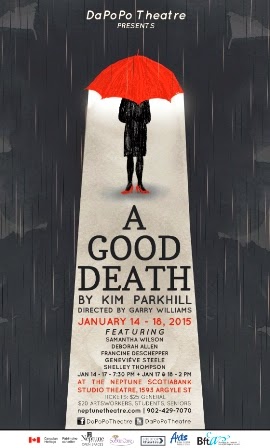 Going beyond illness and legalities, A Good Death examines the ethical, social, practical and emotional challenges to autonomy in dying as one woman, and those closest to her, grapple with the realities of taking control and letting go at the end of life. Recently we spoke with playwright Kim Parkhill about the work, which is being staged by DaPoPo Theatre at the Neptune Studio Theatre in Halifax this week.

What are your own roots?
Good question! Which roots? Geographically-speaking, I grew up in a small community in central New Brunswick. I had a complicated relationship with my rural roots, but I am who I am because of where I have been, what I have done and who I have encountered, and frankly, I'm not sure I'd mess with much of it. My first words on stage, first stories told, first songs sung all happened in my hometown because it was ultimately a nurturing, generous place for me.  The years of experiencing since then have been additive. Artistically, my roots are in very traditional, contemporary theatre with script-to-performance sequencing. But I've branched out since the early years. I love making things from the ground up with a collective, where the play emerges vs. gets scripted. I also desire image-based physicality, highly imaginative structure, unexpected storytelling and poetic gesture, in both text and performance.

How long have you been involved in theatre, and in what capacity?
My first role was Mary in the Christmas Concert at Sunday school when I was four. I was on stage throughout my school years, and a couple of times in university but I chose a non-arts career initially.  I've been a professional theatre artist for almost 12 years now. For the past nine years, I've created and performed principally with DaPoPo Theatre, though I step out with other Halifax theatre companies on occasion. I identify as an actor, but I've also been a stage manager, producer, project coordinator, fundraiser, instructor/mentor, publicist and reluctant administrator. For this project, I'm playwright and producer (a dichotomy, sometimes).

What inspired you to mount this particular production?
The stimulus for the production itself came from Neptune's Open Spaces program. DaPoPo works in found, donated and rented spaces of all types. Basically, if you give us a space, we'll make something in it. My script, "A Good Death," was in a drawer, ready to go into a production phase of development and we decided to apply to Open Spaces with it. Et voila! Originally, I was motivated to write the script because I was astonished that the assisted dying conversation kept getting punted from the public consciousness and parliamentary proceedings, particularly when popular opinion seemed in support of it. (Sorry that was a lot of alliteration). I had to say something. And I had something to say because I worked in patient care in my pre-arts career and within the culture of medicine. I kept putting off the writing, but got down to it in 2011. It's pure coincidence that it's going to stage at a time when there has been a lot of news interest in the subject with legislation in Quebec, the recent proposition from Stephen Fletcher, and so on. For me though, through the fits and starts of writing it, the story has also taken on a theme to which I am often drawn in my work:  the tension between non-normative behaviour and normative expectations. Et voila!
What are the challenges involved?
All of them. There are always joys and challenges, right? I think most theatre-makers, including DaPoPo, face significant challenges related to securing adequate financial resources as well as a paucity of available, affordable and appropriate rehearsal spaces. This particular production has been made possible by generous donors, sponsors (ScotiaCare, Bus Stop Theatre, Phillips PR, Ace Plumbing, Atlantic Talent Agency), grants from arts funding agencies (Arts NS, Canada Council) and our own fundraising. There's also the contribution of energy and enthusiasm of many fellow artists and supporters - which is not to say there aren't bumps, regardless of support!

What are the rewards?
When I write a play, it doesn't feel like it really exists until it's staged in front of an audience. Plays are meant to be shared through live performance. It would have been a great personal regret had it not seen the light of day. This one's pretty important to me. I'm very happy that this story in particular is going out. I hope it does stimulate good (and necessary) conversation about death as part of life, choices and quiet oppression. I also love that we are providing a platform for five talented female performers. I'm not sure of the current numbers, but there was a fairly grim report on women in theatre several years ago - fewer roles, directors and produced plays than male counterparts. I like to think we're positively affecting the statistics with this project, and it was completely intentional on my part, as a female artist, to do so. That being said, it's not just a story for ladies, it's for people.

What can audiences expect during the run?
A completely relatable story, possibly a few tears and (I hope) unexpected laugh, and a concentration of a whole lot of talent on stage. Design work by artists who aren't as well-known outside the theatre community. And just a small measure of the range of work that DaPoPo makes and/or produces. 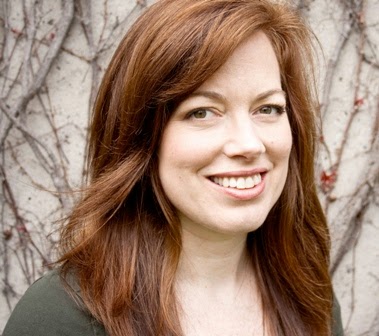 What are your thoughts on the state of theatre in Halifax, and Atlantic Canada?
I might be too tired to answer this. It deserves a dissertation, though I am no academic, and could very well veer into diatribe. Oh well. Here goes. I do worry about theatre a bit, as an entity, in this region. Then again, my natural tendency is toward pessimism. I don't worry about the theatre-makers. They are alive and well, taking risks, and enduring, reproducing even. But they are the ones who intrinsically value theatre.  Stacked against that are empty seats at shows that deserve full houses, an almost-invisibility of an incredibly dynamic theatre community in Halifax, and increasing difficulty in getting the word out about a show or getting people to give a hoot.  Do the "people" value theatre? I can't cope with contemplating an answer to the negative, but sometimes I feel the evidence points that way (even though many people do, I fear most don't). I also think that the spectrum of what theatre 'is' or 'could be' is limited by...well, a lot of things. See above warning re: dissertation. Our choices are typically restricted to what can reliably earn money for someone else. So we are offered what they know we already like, or we are manipulated to believe what they offer is what we already know we like. The learned behaviour is to look for what we know we already like because we also like our money and we don't like feeling disappointed or ripped off. But if we're always being given what we know we like, or conditioned to only look for what we know like, how do we find out what ELSE we like? Or carry on informed conversations about what we don't like? Or, hey, how about what we do or don't know we need - individually, societally, humanly? Ok, here comes the diatribe: I can't tell if a piece of theatre is "too long" by the number of minutes it takes from start to finish. I can't tell if it's "too weird" unless I see it in the context of the world or a broad spectrum of my own experience. I won't stay away from it because it's "too sad" or "too intellectual" or "too poetic" - I want to feel, learn and think!  One of my favourite theatre experiences ever was a German-Dutch production of Ubu in four different languages, none of which I spoke, that ran three hours without intermission. And I had to pee. But I didn't leave my seat.  So. That's a thing. I think I'll put a cap on it with this anecdote. I overheard a ticket-holder at a play (not ours) say they were bringing their child to see the show because she'd already seen the movie, and she would therefore be able to enjoy the play because she already knew the story - the idea that a child (or adult) can't be allowed or expected to stretch their synapses around something different? Ugh. Boxes. BOXES. That's both sad and scary to me.

What's next on your creative agenda?
My DaPoPo colleagues are directing "Sweet Charity" at the Halifax Grammar School. For me, its "open skies" as the 2B Theatre fellas say. There's always something flying around up there, so I'll see what comes. On the writing front, I have a couple of historical ladies battling for my creative attention. Not sure who will gain the upper hand and get out first in a fictionalized stage version of themselves.