What a Young Wife Ought to Know

Set in 1920s Canada, What a Young Wife Ought to Know tells the story of Sophie, a young working-class wife who has a lot to learn about love, sex, and birth control. Recently we spoke with award-winning playwright Hannah Moscovitch about the production, which begins tonight and runs through February 8 at Neptune Theatre in Halifax.

What made you want to become a playwright?
I went to National Theatre School in the Acting Program and I liked the playwriting classes more than I liked the acting classes. I was crappy at the acting classes and enthusiastic about the playwriting ones.  When I was eighteen, I wanted to be an actor because I liked the texts of plays so much that I wanted to say them out loud. But that’s not what it is to be an actor. Actors inhabit character - they don’t say text out loud. I think all along I wanted to be a writer, I just didn’t understand that about myself. Then once I was immersed in the theatre world, I started to write plays because it’s what I knew.

Are they the same reasons you continue to do it?
I’ve worked in various mediums now – opera, film, TV and radio as well as theatre – so I have more perspective on what working in theatre is that I did as an acting student.  I am still very fond of the theatre. I like that it’s collaborative and that the end result is a synthesis of talents and visions, I like working with performers and directors and designers and theatres, and I like that the audience is live and responsive in real-time to the work. And I like that my work will be produced and see an audience (in film, for instance, the chances of that happening are much lower because of the size of the budget required to produce it). So those are the reasons I continue to do it.

What are the challenges of the vocation?
It’s uncertain, payment is erratic, you become subject of public criticism and ridicule (as well as praise), and as a freelancer you have limited control over your career.

What are the rewards?
The reward outweighs the challenges. The reward is meaningful work. Work that I love. Being a writer means I have a good life.

What inspired What a Young Wife Ought to Know?
A few years ago I picked up a copy of Dear Dr. Stopes: Sex in the 1920s, a compilation of the letters sent to the famous British birth control advocate, Dr. Marie Stopes.  Men and women, often in dire straits and desperate to find out how to stop having children, wrote to Dr. Stopes querying about birth control. The voices of the men and women in these letters were distinct from anything I had read before. The letters are explicit about ‘unmentionable’ topics: sex, desire, adultery, childbirth, and birth control. The style of the letters is stark, hilarious and unflinching, and the vocabulary is amazingly frank and sexual. None of the literature of the time (think F. Scott Fitzgerald, Ernest Hemingway, T.S Elliot, Virginia Woolf) - document what people’s sex lives were like in the first decades of the twentieth century. To me, the letters felt like a voyeuristic glimpse into what life, and life for women in particular, was like before birth control. The Dr. Stopes letters inspired the play.

What can audiences expect during the run in Halifax?
I think they can expect a text by me (complex characters, HBO-style content, dark humour) a project by 2b theatre company (in their distinct aesthetic, in which image/lights/sound/image/text/performance are all precise and synthesized), and beautiful and nuanced performances by Lisa Repo-Martell, David Patrick Flemming and Rebecca Parent (some of the best actors in Canada). Also, I’ve written so much sex into this play that I blush in rehearsals. Audiences can expect a lot of sex. No nudity. A lot of sex. 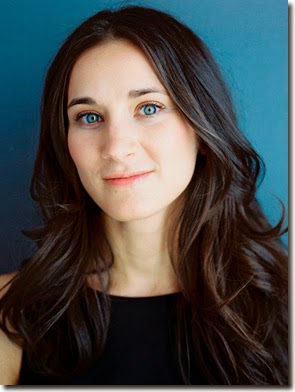 Is your creative process more ‘inspirational’ or ‘persiprational’?
Probably perspirational - I do rewrite a lot. I generally draft between 30 and 70 times for each play.  Also, inspiration is easier for me for some reason. I don’t work hard to think of initial (generative) ideas.

What makes a good play?
I love this question. I think plays can be good for a weird assortment of reasons.  I like lots of different of work. I like Martin Crimp and Sarah Kane (on the post-modern end of the spectrum), and I like devised work, and live art. And I like Chekhov and Pinter and Brecht and Marlowe and Bond. There are a lot of Canadian playwrights and creators whose work I love. I’m not dogmatic about what I think makes a good play. I like work that’s rigorous, that’s truthful (has depth), has vision, and that’s original (in form and/or content and/or style) - those are my criteria for a  good play.

What are your thoughts on the state of theatre in Canada today?
I think theatre - as well as many mediums - is up against how good TV has become. TV is so fucking good. And writers from pretty much every other medium are gravitating there, which is only improving its quality.  For theatre to be able to compete with clicking on Netflix (at 7.99$ a month) and watching the best writing that’s happening in any medium is going to be very hard. I think artistic directing is very hard these days, and there’s not a lot of room for long-term planning, which is deadly.

What's next on your creative agenda?
I’m premiering a play called Infinity at Tarragon Theatre in TO, with a crack team of collaborators, including Lee Smolin, the theoretical physicist who runs the Perimeter Institute. I’m working with Stratford on a new play called Bunny. The new TV show I wrote on last year called X Company, created by Mark Ellis and Stephanie Morgenstern, premieres on CBC on Feb 18th. I’m working on the stage adaptation of Fall On Your Knees by Ann-Marie MacDonald with Alisa Palmer and the Shaw Festival. Yeah, lots of projects.

What a Young Wife Ought to Know
January 27 – February 8, 2015
Neptune Theatre, Halifax
www.neptunetheatre.com