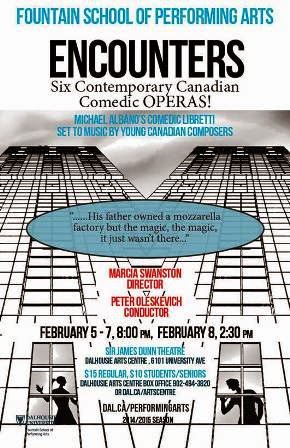 From February 5 – 8, the Fountain School of Performing Arts in Halifax presents Encounters ~ six contemporary Canadian comedic operas. Recently we spoke with director Marcia Swanston about what audiences can expect.

What are your own roots?
I was born in Southern Alberta, studied many places among then, in the UK at the Guildhall School of Music & Drama, London then lived and worked out of Toronto for 20 years as a professional singer.  I began teaching voice at the Western University in Ontario and came to Dalhousie in 2001.

How long have you been involved in opera, and in what capacity?
My mother was a piano teacher and I studied piano and voice from an early age.  My career as a professional opera singer began the mid-80s working with the Canadian Opera Company and then across Canada and into the States. I have always been interested in the backstage goings-on in the theatre, and at music college I assisted with stage management, props, costumes. A couple of years after my appointment to the then Music Department at Dalhousie, I started directing opera. My first production as director was in 20015, a comedy by von Suppé, Ten Belles without a Ring. This was great fun and I directed again the next year: A dinner engagement and La ServaPadrona.

What inspired this particular production?
In 2012, I spent a bit of time at the University of Toronto observing some the production work going on in the Opera Program there. Michael Albano, who is the librettist of Encounters and the resident stage director of the UofT Opera program, told me about a project they were working on: Encounters for a number of female voices and a few tenors. It sounded very interesting and I asked if I might see the scores when the work was finished in case it might work for us here in Halifax - and it does. The urban settings and current topics (Rob Ford, for example) were interesting, and our students relate well to the dramatic intent.  A series of short operas allows for a number of singers to be cast and the voice types fit exactly with our current voice student enrolment. One of the composers is a Dal alumnus, Robert Drisdelle, so this was an unexpected bonus! As of July 1, 2014 thanks to the generosity of Fred and Elizabeth Fountain, the Theatre and Music areas merged to become the Fountain School of Performing Arts.  This is our first stage collaboration with set, props and lighting designed by our Theatre faculty and built by our Fountain School students.  The costume coordinator is a senior Costume Studies student supervised by her professor.  It’s also the first time we have had a chamber orchestra and we are very fortunate to have a professional opera conductor leading the shows.

What are the challenges involved?
Finding repertoire appropriate for singers in the undergraduate years is often difficult. Traditional operas require a well developed vocal technique, something that normally occurs much later than 18 – 20, the typical age of an undergrad voice student. The repertoire this year is perfect for most of them but there are challenges involved with learning new music and they have been studying the music since September, with some staging rehearsals beginning in November and continuing on weekends in January. Many of the singers do not have stage training, in fact for some this is the first time on a stage. The orchestra used in the premier in Toronto was much larger and different instrumentation.  The composers very kindly re-scored their works for the instruments in our small ensemble of student instrumental players.

What are the rewards?
Seeing the growth in the students and the joy they have in doing something really well.  I have been given so much by so many talented directors and teachers; it’s a privilege to be able to pass anything I can on to the next generations. It’s wonderful to collaborate with my professional colleagues at Dal. What a wonderful profession we enjoy: playing on stage for our whole lives!

What can audiences expect during the run?
The show is a smoothly running series of short operas that are clever and entertaining. This is a show for both the first-time opera-goer and seasoned opera lover. Highly approachable, fresh new music, visually stunning (sets and lights) should produce an enjoyable evening at the theatre. 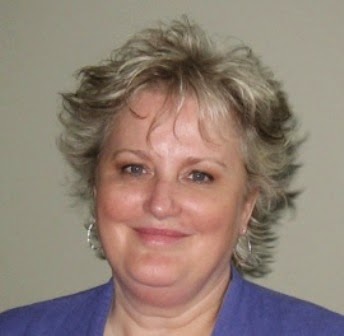 What are your thoughts on the state of opera in Halifax, and Atlantic Canada?
There are a lot of people who love opera living here in Atlantic Canada. Opera Nova Scotia with their annual production and events going on throughout the year, the Metropolitan Opera broadcasts to cinemas on Saturday afternoons and Janice Jackson’s summer contemporary opera workshop are all fine activities going on here in Halifax. A major stumbling block to producing opera is the absence of a hall with an appropriate stage (with flies and wings) and, most significantly, an orchestra pit. I believe if we had a good performing space, this would result in many more opera performances.

What's next on your creative agenda?
I am curating and performing a program of words and music entitled “Flight” at The Music Room on March 18, with Susan Stackhouse, actor, Shimon Walt, ‘cello and Nina Horvath, piano. In May I am performing with Opera Nova Scotia in a staged version of Fly like a bird a piece by local composer, John Plant, which was premiered in concert at a recent ScotiaFestival. In the fall I am performing in a couple of newly composed operas with Essential Opera, as part of OperaLyra Ottawa’s season.  Maureen Batt, a former voice student of mine at Dal, is a co-artistic director of Essential Opera and we will be performing together in Ottawa. Fun fact: Maureen and I are part of the same program for Opera Nova Scotia this spring.  In addition to Fly like a bird, ONS is presenting two other one act operas including La ServaPadrona.   In 2006 I directed Maureen in this production for Dal Opera.