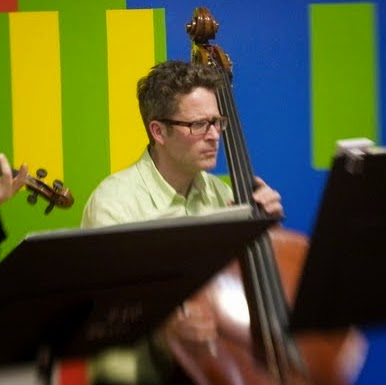 
You're from New York originally! What are your earliest music memories/experiences?
ARM: I moved to Sackville New Brunswick when I was a little kid so my memories of the USA are sketchy. Earliest musical memories are my Dad playing piano downstairs in the house and the first record my parents gave me (Scheherezade by Rimsky Korsakov).

How did you fall in love with playing the bass?
ARM: My parents didn't listen to the radio. My friends at school knew about various pop music. I figured the way to find out about that stuff was radio. There was an old tube radio in the shed, the main switch and volume control was broken, but I realized if I pulled out the component, the radio worked. I discovered pop and rock, but my ear always heard the bass (this was the '70s and all bands had real bass players) so I appreciated a lot of genres; Motown, Jazz, Progressive Rock, Punk. Of course I wanted to be a rock star. In Sackville there were scant opportunities to form the kind of band I wanted to be in, but there were Classical things to do, so I gravitated to that.

What brought you to Saint John?
ARM: I moved to Saint John in 2011 to work for the New Brunswick Youth Orchestra. We were starting our Sistema NB Saint John Centre, which is thriving now! Our mission is social change through orchestral music. We provide well over 200 kids with such a program after school every day. Some of these kids have real economic and social challenges.

You've had an eclectic range of musical experiences, from being principal bassist for Symphony New Brunswick and Atlantic Sinphonia and touring with the The Canadian Opera Company to creating sound/installation art and founding/touring with Motion Ensemble...Is there a new genre/medium you still want to explore?
ARM: I've been exploring audio art pieces in the past few years. My first official showing of two pieces is up right now in a group show called COVET at the McCain Gallery: http://mccainartgallery.com


What is it like when one of your original compositions is performed?
ARM: I probably like this more than anything.

Because of your middle name, do some people think you play the oboe?
ARM: No. But I started always using my middle name years ago when I realized there were many Andrew Millers around.

For those who don't know yet, what is OPEN ARTS?
ARM: OPEN ARTS is where to see contemporary, experimental and improvised music in Saint John, NB featuring the finest performers from the region and beyond. It was an offshoot of Motion Ensemble; when the group began winding down a couple years ago, this series took off.

What can audience members expect for the February 6th performance?
ARM: Wonderful improvised playing by Halifax's Geordie Haley, we're doing one of his written pieces too! Violist Robin Streb has such a  beautiful sound; I love working with her. “Bubble Wrap” is a cool piece by New York's post-rock icon Elliott Sharp. Also a super-austere meditative piece called “Having Never Written a Note for Percussion” by James Tenney.

How has the music scene in Saint John changed throughout the years you've been living there?
ARM: From what audience folks have said, Open Arts is a much needed place to clear the cobwebs from your ears!