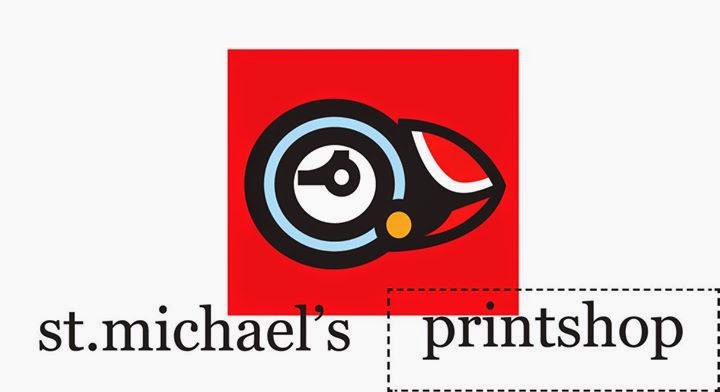 St. Michael’s Printshop located in St. John’s Newfoundland is an artist-run studio that has really made its mark in artistic communities on a local and global scale. “From its inception in 1972, St. Michael’s reputation as a nexus for printers and printmaking in Newfoundland has spread, attracting artists from around the world,” describes the Association of Artist Run Centres from the Atlantic. “Today, it is recognized as one of the country’s premier visual arts establishments through which a forceful exploration of the physical and spiritual landscape continues to take place.”

“We are an open space and are always happy to have visitors,” says SMP’s Business and Events Manager, Erin Heys. Recently we caught up with Heys to learn about the Printshop’s intriguing history, how it supports emerging and established artists and some of its thrilling creations and accomplishments throughout the years.

How long have you been involved with St. Michael's Printshop and in what capacity?
EH: I started at St. Michael’s last spring, and at the time I really didn’t know much about the world of printmaking at all. Since I was lucky enough to come onboard, I have fallen completely in love with the organization. My colleague, Mike Connolly, is the Studio Manager for SMP, meaning that he handles the artistic side of things (he is a talented artist himself), while I am the Business and Events Manager, so I get to handle the organizational/administrative side of things. Plus I am getting to explore my own artistic side while I am at it! I believe SMP offers something really unique and important to the artistic community in the city and in the province. I got to come in right in the middle of SMP’s 40th anniversary year, which meant a packed timetable full of special events. It also meant I got the chance to meet all sorts of amazing artists from all over the country and the world that came together to be part of the celebration!

How did St. Michael’s Printshop begin and what was the inspiration?
EH: Artists Don Wright and Heidi Oberheide founded St Michael’s in 1972 with the assistance of a grant from the Canada Council for the Arts. At the time, Printmaking in a global context was hugely popular, but the province was seriously lacking in terms of infrastructure and facilities. Don Wright and Heidi Oberheide wanted to fill this void and start a shop where professional artists could access quality equipment and technical help, and students could come and learn. The Printshop was originally located in the small fishing village of St. Michael’s on the Southern Shore of the island, approximately 50 kilometers from St John’s. At the time, Memorial University’s Extension Services, whose mandate was to support cultural activity in rural communities, operated the Printshop.

St Michael’s Printshop remained in this location for fifteen years, attracting a core group of local artists and hosting visiting artists from across Canada. Memorial University withdrew from the operations of the Printshop and transferred the assets to St Michael’s Artists and Printmakers Association, the non-profit, artist-run organization that currently operates the facility. In 1986, St Michael’s Printshop moved its operations to a downtown location in St John’s, where we still operate today! It might be a different location from the original, but it’s still a spectacular one! I get to look out over the harbour from my desk every day.

What have been some highlights for the Printshop throughout the decades?
EH: As of 2014, SMP is 40 years old – that is a pretty big deal for any arts organization! To date, more than 3,000 editions of prints have been created at St Michael’s, by hundreds of artists from Newfoundland, Canada, the USA, Europe and Great Britain. Prints bearing the distinctive St. Michael’s Chop (embossed Puffin logo) can be found in public and private collections around the world. We also have an amazing archive of nearly all the prints that have been made at SMP over the years. It really is an unparalleled resource for visual artists in the province. 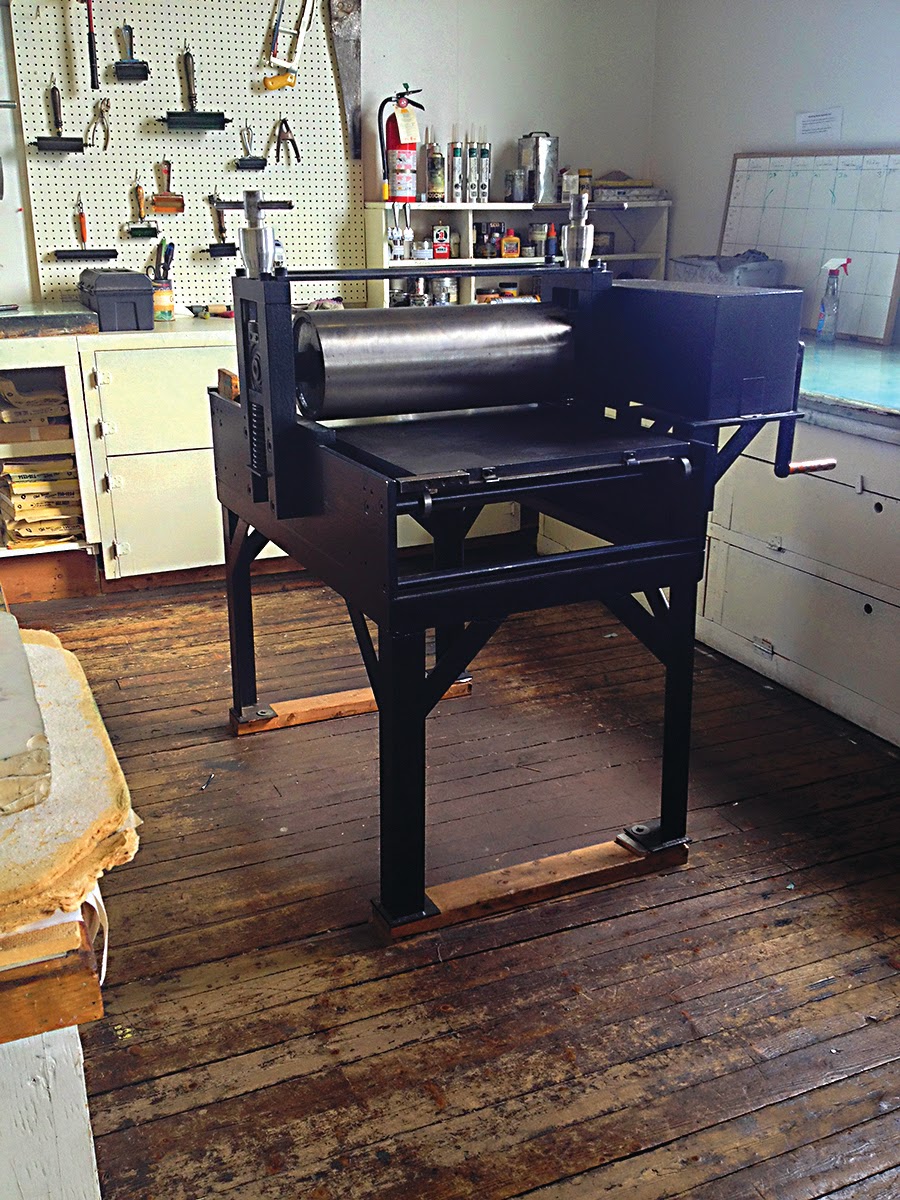 In 2002, St Michael’s Printshop celebrated its thirtieth anniversary. To mark this milestone, the Printshop partnered with the Art Gallery of Newfoundland and Labrador to present The Power of Place, an exhibition that explored the influence that Newfoundland’s physical environment has had on visiting artists and on the technical and esthetic continuum that is documented in the Print Archives Collection. This exhibition was toured nationally.

In 2009 St. Michael’s Printshop was awarded the “Kippy Goins Award” by VANL-CARFAC for its continued support of local artists in developing their careers.

2010 saw the purchase of a new portable etching press, purchased from an endowment fund in the name of the late Anne Meredith Barry.  The Anne Barry Memorial Press is used for outreach in schools, and in communities around the province.

And 2014, a milestone that I got to be a part of, brought about a bunch of exciting things for the Shop! We commissioned five beautiful works of art by talented artists who each have special relationships with SMP: John Hartman, Scott Goudie, Christine Koch, Tom Hammick, and Veslina Tomova. We also published a beautiful new coffee-table book, written and curated by Kevin Major – Printmakingon the Edge: 40 Years at St. Michael’s. The whole anniversary year was really a lot of fun. 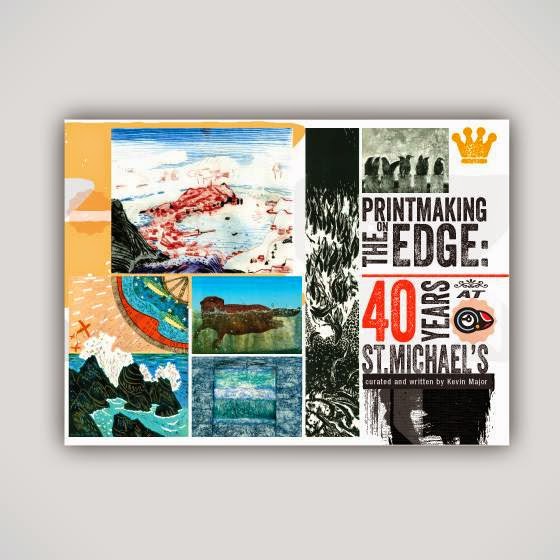 For those of us who don't know, what is printmaking?
EH: Printmaking is an art form that really doesn’t seem to be very well understood in general – I certainly didn’t know enough about it before I started working here! The problem is that when people hear the word “print”, they often think you’re talking about a reproduction of a painting – basically a high quality copy. In the context of St. Michael’s, this is not what we mean by printmaking. These prints are not just reproductions, but rather each print is an original, hand-printed by the artist. Basically, the printmaker creates an image on something that we call a matrix; this can be done by carving into wood or linoleum (relief printing), etching into metal (intaglio), drawing with a grease pencil on a stone (stone lithography), etc. – there are a ton of different techniques. Then ink is rolled onto this matrix, paper placed on top, and the whole thing is run through a printing press. This process is repeated for each print in the edition. For this reason, each one will be a little different depending on the process, and each one is a labour of love from the printmaker, lending originality to the print. It can be a very complex process that requires a high level of technical skill.

It sounds like the Printshop is a very encouraging and inspiring environment. How has it fostered emerging artists and encouraged established ones?
EH: These two goals are pretty central to our mandate. In terms of encouraging emerging artists, one of the main ways we do this is with the Don Wright Scholarship. Established in 1991 in memory of one of the founders of St. Michael’s Printshop, the Don Wright Scholarship is offered to a recent graduate of a recognized post-secondary Fine Arts program who demonstrates technical expertise and innovation in the print medium. The successful applicant receives an artist’s fee, and a twelve-month residency at the Printshop. This scholarship assists in the professional development of emerging artists by serving as a bridge between the academic environment and the professional open-studio environment. As of 2008, the scholarship has included an exhibition at the end of the residency. In 2010, it was improved to aid in the transition from student to practicing professional by offering informal feedback sessions with artists from the community, as well as quarterly progress meetings. We also undertake projects such as last year’s exhibit, Fresh Prints, which was an exhibit of work from a print swap organized by SMP. Fourteen emerging artists from all over the world each created a new work in an edition of 15, and then these prints were all interchanged so that each of them received a full set, including a full set for SMP. We exhibited these works at the QE2 library at Memorial University. 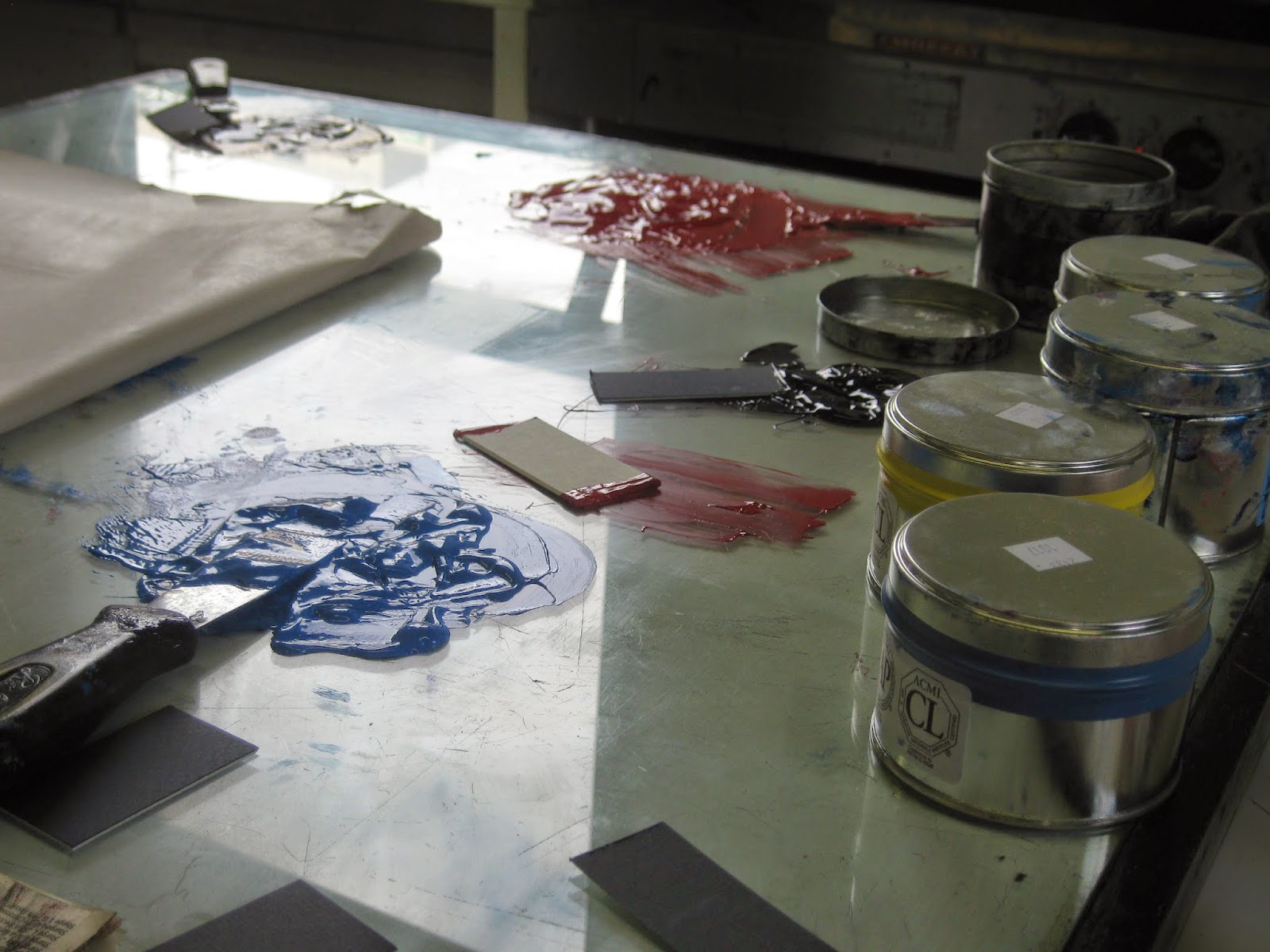 We encourage established artists first and foremost by providing professional printmaking facilities for them to access and a space for members to display their work, should they chose to do so. We also run a Visiting Artists Program each year. Established in 1992, this program is intended to recognize, promote, and offer financial assistance to printmakers provincially, nationally, and internationally. It offers professional fees to participating artists, as well as the equivalent of one month’s rental in-kind. Artists are given 24-hour access to the studio. This program has contributed substantially to the development of a focused body of work by the participating artists.  The cooperative and open-studio facility at St. Michael’s provides an atmosphere conducive to the exchange of ideas and information among artists.  Each artist is required to offer a workshop to the membership during their residency.

If anyone is interested in applying for our Scholarship or the Visiting Artist program, they should check out our website for more details. Over and above these programs, we are always open to new ideas and collaboration.

Are there some works you yourself or the team have created that you're particularly proud of?
EH: This past year, as part of our 40th anniversary celebrations, a team of SMP volunteers worked together to create a print called ‘Regatta Rowers’. It was the result of an event we organized called the Steamroller Printmaking Spectacular. It happened last summer, the night before the Royal St. John’s Regatta (an important civic holiday and historical event in the city) next to Quidi Vidi Lake - a crowded, public lakefront. Emerging artist, Steve Evans, had carved an image in a huge piece of linoleum flooring – one way too large to put through a printing press. A team of volunteers all worked together to print the image, using a real steamroller as the press! It was quite the publicity stunt, drawing a lot of curious eyes and media coverage. Our goal was to expose a different audience to what printmaking is and how it works, and we accomplished this, in addition to having a ton of fun and creating a beautiful print! A bit larger than life, it is still on display at the shop! Anyone can drop by and check it out! 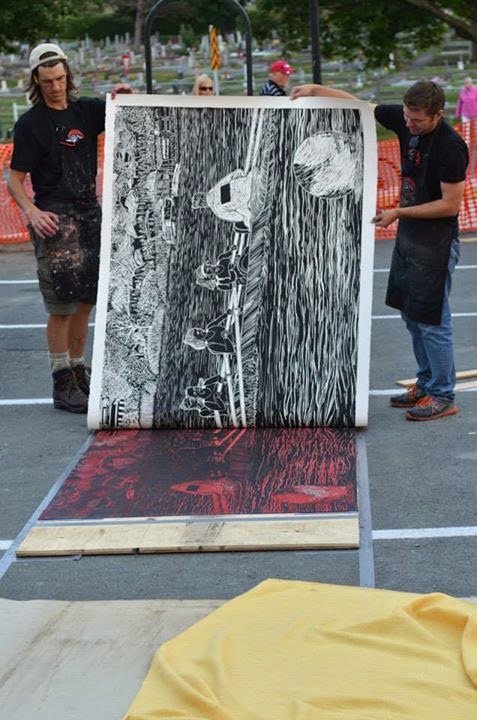 What's happening at the Printshop in the next couple months?
EH: With our 40th anniversary year just having drawn to a close, we are still reeling from all the excitement! There will be lots more exciting things to come in the upcoming year, however. We just picked and announced our Visiting Artists for the 2015-16 season – six incredibly talented individuals that we are super excited to work with. Our Don Wright Scholar, Amery Sandford, is doing some very interesting work already around the shop. We also have our Annual Vault Sale coming up in the spring, and our Members Exhibit not long after. We will be releasing a more comprehensive calendar of events for the year very soon, so to stay up to date with what is coming up this year check out our website and sign up for our mailing list!

Is there anything you would like to add?
EH:Thanks so much for your interest in SMP, and remember we are an open space and are always happy to have visitors! Any time during open hours, pop by and check out the space!