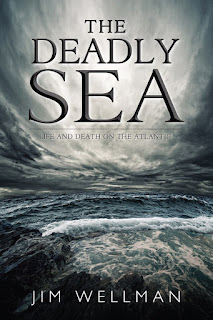 Fishing is the most dangerous occupation in the world: in Atlantic Canada, an average of one person dies every month while working at sea. The Deadly Sea, by bestselling author Jim Wellman, contains twenty-five stories about men and women who work in the Atlantic Canadian fishing industry, ranging from biographies of professionals to tales of tragedy at sea. Recently we spoke with Wellman about the book.

What inspired you to become a writer?
Mostly, I’ve written about accidents at sea involving inshore fishing people. They are hard working people trying to earn a living in extremely harsh conditions in the deadliest industry in North America. On average, one fisherman dies every month in Atlantic Canada. They are the fishermen of small boats and, other than a short story on the evening news, not much is known about what happened to them or who they were. I write their stories for a fisheries magazine called the Navigator and then later I rewrite and publish them in book form. I do that in hopes of keeping their memory alive and never forgotten. I also write profiles of marine people. Newfoundland and Labrador, along with the rest of Atlantic Canada, is full of fascinating people of the sea. They are the stories. I simply listen to them tell their stories and do my best to assemble it.

Are they the same reasons you do it today?
Yes. I am the son of a schooner captain on the northeast coast of Newfoundland and then in my professional life hosted Fisheries Broadcast on CBC Radio for 15 years. After taking an early retirement from the CBC I became a contributor to Navigator. I later became the magazine’s managing editor. So, I have long associated with fishing and marine people and developed a very deep affinity to them. Writing about them is both a privilege and a joy.

What are the challenges of the profession?
Writing about tragedy is challenging for several reasons, especially the need for attention to detail. When family members and friends of those lost fishermen read my stories, they scrutinize every word intensely because of the highly personal attachment to the accident. Getting it right is absolutely crucial.

What are the rewards?
It may sound odd but writing about the loss of fishermen is very rewarding. Although I’m asking people to tell me about the most horrific periods of their lives, they truly appreciate having the story of their husband, father, brother, son etc. kept alive.
Years ago, it was customary to try and shelter loved ones, especially children, from the details of hat happened. While it was well intentioned, the effect of hiding reality has often left close family members in the dark for years and many times, they hear the story for the first time through reading my books. In many cases, they start discussing the tragedy among themselves for the first time and, almost without exception, they tell me that helps them find a higher level of closure. And for that, they are extremely grateful. So, yes, that is very rewarding. 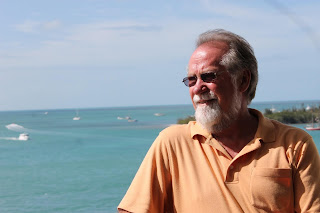 How have you grown as a writer over time?
I’ve never considered myself a great writer but rather, a good listener and let the people tell their own stories. I try my best to put it together for them the way they would like to have it told. Like any craft, the more you do, the more you learn and education in any form contributes to “growth.”

Is your creative process more 'inspirational' or 'perspirational'?
Definitely inspirational because the people I write about are inspiring. In my profile articles, I write mostly about ordinary men and women who work in the marine industries. People often tell me they are puzzled by my interest in them because they don’t feel worthy of publication – that they are just a “nobody.” When I tell them that my profiles highlight that ordinary people are indeed very important- and for me – they are far more interesting than those of white collars, wealth or fame. After reading about themselves, they get a big kick out of suddenly feeling like a “somebody.”

What makes a good book?
One that is written honestly, and with compassion.

What motivated you to put The Deadly Sea together?
My writing about sea people, whether those lost at sea or people working or retired from the marine industry is an ongoing process. I write one of each category for the Navigator magazine every month and publish them in book form every other year. So, it’s a continual work in progress.

What did you learn during the process?
With The Deadly Sea and my previous books it’s a constant evolution of learning more about the people who make a living on or near the sea. And, the more I lean the more fascinating those people are to me,

How did you feel when the book was completed?
Because it’s the most recent in my series of eight books about sea people, I always feel amazed that after all that writing, I haven’t even scratched the surface of the number of tragedies still not written about. And, of course, the endless line of people whose lives are wonderful stories never cease to amaze. So, at the end of The Deadly Sea, it struck home that I won’t live long enough to tell as many of those stories as I would like, even if I write for another 10 years or more.

What has the response been like so far from those that have read it?
Excellent response. It is truly humbling.

What are your thoughts on the state of Newfoundland literature today?
It’s alive and well. Newfoundlanders are natural storytellers – its part of our culture. I grew up in a tiny outport community and listening to old skippers spin yarns of bravery, intrigue and tragedy was routine evening entertainment. Story telling is essentially what writing is all about so it’s no wonder that even though we only have a small population, we have an amazing number of writers, many of whom churn out a new book every other year.

What's next on your creative agenda?
I’m ready to submit another manuscript to my publisher, Flanker Press, within a few months if they want it.