The Royal Newfoundland Regiment in the Great War 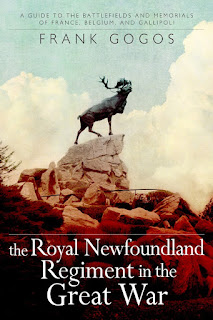 Frank Gogos graduated from Memorial University in 1994 after completing his education in history and Newfoundland studies. His latest effort is The Royal Newfoundland Regiment in the Great War. With more than 400 photographs and 40 maps, the work is a tribute to those who served and a guide for those who wish to retrace the soldiers’ steps. Recently we spoke with the author about the book.

What inspired you to become a writer?
I guess it would have been my father. He passed away when I was four years old but left behind scrapbooks of poems and short stories in both English and Hungarian. It was his dream to be a writer. I guess I picked up on that and it had become a dream of mine also.

Are they the same reasons you do it today?
Not really, I had always thought I would be a fiction writer and I have evolved into a historian of sorts. My first two books were for entirely different reasons than I ever imagined.

What are the challenges of the profession?
The biggest challenge is financial of course. The type of writing I do requires travel for research, accommodations and a lot of free time which I can only achieve through financial sacrifice. It is the cost of being a writer, researcher - historian.

What are the rewards?
In my case the satisfaction of expressing my passion for the subject to people interested in Newfoundland and the Great War - as well as adding to the general knowledge base of the subject.

How have you grown as a writer over time?
The more I write the more polished it becomes. Practice makes perfect as they say. I still have room for improvement and look forward to honing my writing skills on my next project.

What makes a good book?
Any book that can engage a reader from beginning to the end makes a good book. In the historical sense a good book should add to the knowledge base without being cumbersome. It needs to be accessible to everyone not just the academia.

What motivated you to write this particular book?
After traveling overseas on my own personal pilgrimage to the Newfoundland War Memorials and battlefields I began to be asked a lot of questions by friends and acquaintances about where to go and what to do from people getting ready to do their own pilgrimages leading up to the 100 Anniversary of the Newfoundland Regiment’s near annihilation on July 1, 1916. I have been the guide for intimate and large tour groups (and continue to do so) to the battlefields of France, Belgium and Gallipoli for a few years now. It all just started to fit together, my research, travels and photography and the timing was important factor in the decision. 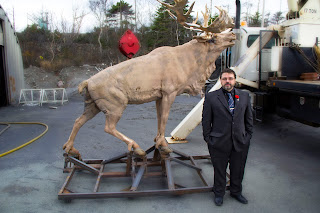 What did you learn during the process?
How to stay calm! LOL

How did you feel when the book was completed?
A sense of relief! It had been a long process, not just in the writing portion but in layout and design. Many meetings and adjustments were made right up to the last minute.

What has the response been like so far from those that have read it?
The response has been overwhelmingly positive. Sales are brisk. I have received feedback from people who bought the book, used it on their own pilgrimage and went out of their way to compliment me on its usefulness and information that it contains. Other researchers in the field were surprised and have commented that they learned things from the history portion that they did not know.

What's next on your creative agenda?
I have several more history books I wish to write regarding Newfoundland and the Great War. Eventually I would like to finish my World War I book set with a historical fiction from my family’s perspective.