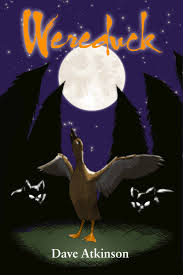 Dave Atkinson is an award winning, freelance journalist, columnist and broadcaster, who lives in Charlottetown, PEI, with his wife and three children. His work for the CBC has been featured on such programs as The Current, Atlantic Voice, and Maritime Magazine, just to name a few.  And, in September 2014, he added novelist to the list of his writing achievements, with the release of WEREDUCK, which is published by Nimbus Publishing.  The second installment, Cure for WEREDUCK, is scheduled to be released in April 2016.

RB: Dave, thank you for the great read.  For those out there who haven’t read your novel yet, could you please describe what it’s about?
DA: Sure! WEREDUCK is about a girl named Kate who grows up in a family of werewolves. Kate’s never liked the idea of becoming a wolf. She’s always thought it would be more fun to be a duck. The book tells the story of how Kate learns to follow her own dreams and “quack” at the moon. It’s a fun and funny story for kids aged 8-12.

RB: When creating the characters, did you model them after actual people, or are they completely fictitious, or perhaps a mix?
DA: The characters are fictitious, but I can relate to all of them in one way or another. In a lot of ways, I’m Kate, but I’m also John, Bobby, Dirk… They all have their own personalities, but I drew on my own feelings and experiences for each of them.

RB: Out of all the characters, whom would you say you relate to the most?
DA: Probably Dirk, who is technically the bag guy. Dirk is a reporter at a lousy tabloid newspaper called Really Real News. He’s obsessed with the idea of putting werewolves on the front page of his newspaper, and he’s a bit… odd? But more than almost any of the other characters, I drew on my own experience as a journalist to create him. I feel like every newsroom I’ve ever worked in has had a Dirk-like reporter.

RB: Recently you traveled to Ontario to promote your book. Can you share with us how it was received?
DA: Oh this trip was great. Much better than I thought it would be! I read to and met more than 450 kids on this trip. Many of the kids had already read the book and had some really great questions. Some of the teachers had put together assignments based on the book, and they surprised me with copies of a WEREDUCK board game and drawings from different scenes in the book. It was a lot of fun.

“I wanted to write a book that might be the first novel a kid ever read by his/herself.”

RB: What types of comments did the people in Ontario give you?
DA: So many of the kids wanted to know if there will be a second book, which there will, coming out next year. I had a lot of great questions… a lot of kids seemed to really enjoy the character Wacka, who is a wild duck that Kate befriends. Without giving too much away, I let them know that Wacka plays a much bigger part in the second book.

RB: How did the manuscript change during the course of the rewriting and editing process?
DA: When I originally submitted it, the book was much shorter. I worked in radio for ten years, so I had ten years worth of producers telling me to write shorter and punchier. But for a book, especially a novel, it just wasn’t enough. The editor at Nimbus got back to me with a lot of great feedback. The most important bit was that it needed to be a lot longer. So I made it about 50% longer, which meant expanding the timeline, adding a lot of scenes, and in one instance, creating a new character. There would have been no Wacka without that rewrite.

RB: During the writing process, what were your biggest challenges and rewards?
DA: This book was always about just writing. I had no illusions that it would be published. I hoped it would, but I also knew that it’s a very competitive field. I first of all wanted to see that I could actually write a book. Probably the hardest part was not having any feedback as I was writing. In journalism, the feedback is instant. You write a story. You hand it to an editor right away. You work with them to make it better. It’s published. The whole process is just hours long. With this book, I wrote. And I wrote. And I wrote. And I had to trust my instincts that I wasn’t taking it the wrong way. I didn’t want to show it to anyone until it was ready, so that was hard. But I’ve come to really appreciate that freedom.

RB: Could you share with us a little about the path to publication, once you decided to publish it?
DA: I wrote the book in about five drafts, and sent it to some friends for critical feedback. I made some more changes, and then submitted it to Nimbus. It took them about six months to get back to me, and it was a rejection letter. It stung a bit, but the editor included detailed notes and suggestions of how to make it better. I took all of those notes to heart and took about nine months to expand and rewrite. I submitted again, and the same editor called me to tell me it was accepted. And my kids will tell you I jumped around the house for about an hour. It wasn’t a book until a year later, because there’s so much that needs to happen from the publisher’s end. I was assigned to an editor, and we tossed the manuscript back and forth for about three months. Over the rest of the year, little things trickled in that made it more and more like a book: things like early sketches and concepts for the cover, invitation for review, etc. When I first opened the box with the brand new books, it was a wonderful feeling.

RB: Other than your promotional visit to Ontario, what kind of reactions to the novel have you received, so far?  And, is it what you expected?
DB: Lots of great reaction! There have been some positive reviews in publications such as Quill and Quire and CM Magazine. Lots of media interviews. The best, though, has been what I hear from kids. I get emails and letters from kids who love the book and have so many questions. That, really, has been the best part.

RB: What kind of advice would you have for aspiring authors thinking about pursuing writing as a career?
DA: Keep writing! And don’t take criticism to heart. Find the people who can help you make your work better. Everything can be made better. Don’t be afraid to rewrite. Most of the writing process for me is revisions.  I just keep revising and revising until it reads like a book.

Roger Douglas Bursey is a freelance writer based in Cornwall, Prince Edward Island.